Web Panel | The Ordeal of the Century, Israeli Occupation and Practices in Palestine

Following the publication of the Winter 2020 special issue “The Ordeal of the Century,” Insight Turkey gathered a panel with the distinguished scholar contributors of the issue as a means to elaborate more on the topics of the Palestinian-Israeli conundrum and the power struggle in the Middle East. Due to COVD-19 pandemic, the panel was held online and broadcasted live from YouTube and other social media platforms. 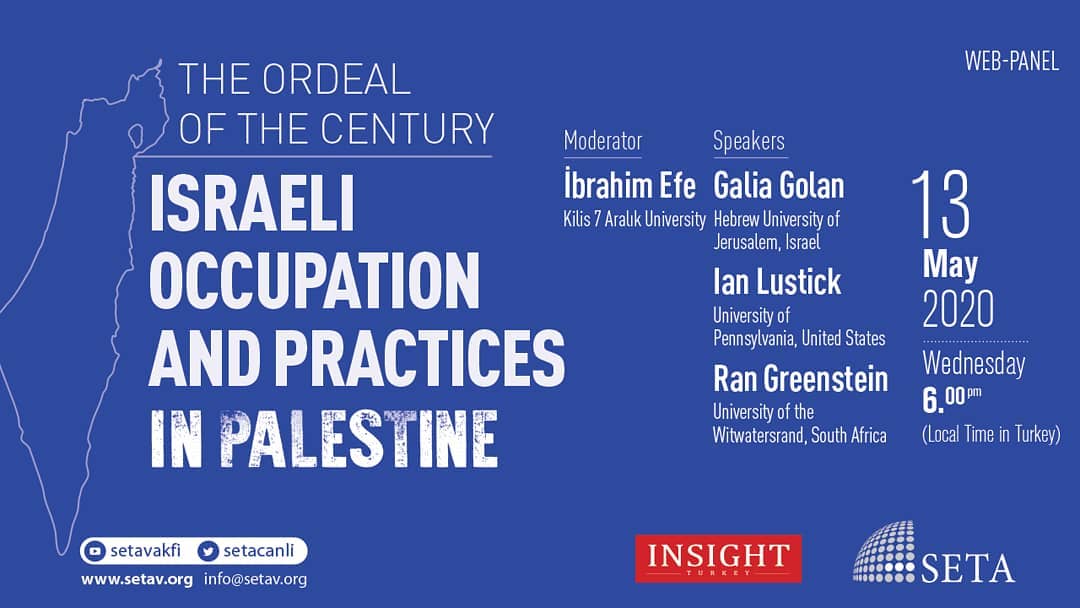 Dr.Ran Greenstein, University of the Witwatersrand

Prof. Ian Lustick a professor in the Political Science Department of the University of Pennsylvania. He is one of America’s foremost experts on Israel and Israeli- Palestinian relations and has published multiple books and articles in leading international affairs related to Middle East politics in general and Arab-Israeli dispute in particular.

Prof. Lustick took a closer look at the "Ordeal of the Century" problem. He explained his perspective on the Israeli-Palestinian conflict in which he states that there is no longer an opportunity to negotiate a two-state solution and there is no future vision where these actors can find a settlement in a peaceful way. Even during the 1970-1999 peace process, there was only a mere 30 percent chance that the negotiations on a two-state settlement would be concluded in a positive way. Henceforward, there is a lack of effort to conduct negotiations between the Israeli state and the Palestinian people. This lack of effort is mainly related to the nature of negotiations which have become highly provocative in recent years. Additionally, Prof. Ian Lustick stated that what exists between the Mediterranean Sea and the Jordan River is a one-state reality, this might not be a solution however it part of the factual reality.

Ran Greenstein is an associate professor at the University of the Witwatersrand, Johannesburg, South Africa.

Dr. Ran Greenstein elaborated in accordance with his article on the ongoing apartheid policies of Israel and how it is related to the abandoned practice of apartheid in South Africa. First, He started by explaining the concept of apartheid from different perspectives. Later he went on talking over where the Israeli boundaries truly lay. What and where is the “Greater Palestine” and the “Greater Israel.” The influx of immigrant Jewish communities from different countries to Israel has disenfranchised the Palestinians from their land. Although Israel claims that it offers democratic rights for all its citizens, in reality, Palestinians have nothing. Ran Greenstein conceptualizes this situation by comparing the Israeli policies with the practice of apartheid in South Africa. He identifies the policies practiced by Israel as “apartheid of a special type” and a crime against humanity.

Dr. Ran Greenstein specifies these discourses which are quite an essential component while talking about the Israeli-Palestinian issue precisely since they are absent from the mainstream political discourse.

The panel ended with a question and answer session. If these topics catch your interest you can reach the full panel session via YouTube.