As a continuation of the 1st Panel held in May 2020, Insight Turkey continued to focus on the controversial topic of current interest “The Ordeal of the Century: Israeli Occupation and Practices in Palestine.” The second panel is composed by our precious contributors of Winter 2020 special issue “The Ordeal of the Century,” and has elaborated a different perspective of the conflict. Due to COVD-19 pandemic, our panel was held online and broadcasted live from YouTube and other social media platforms. 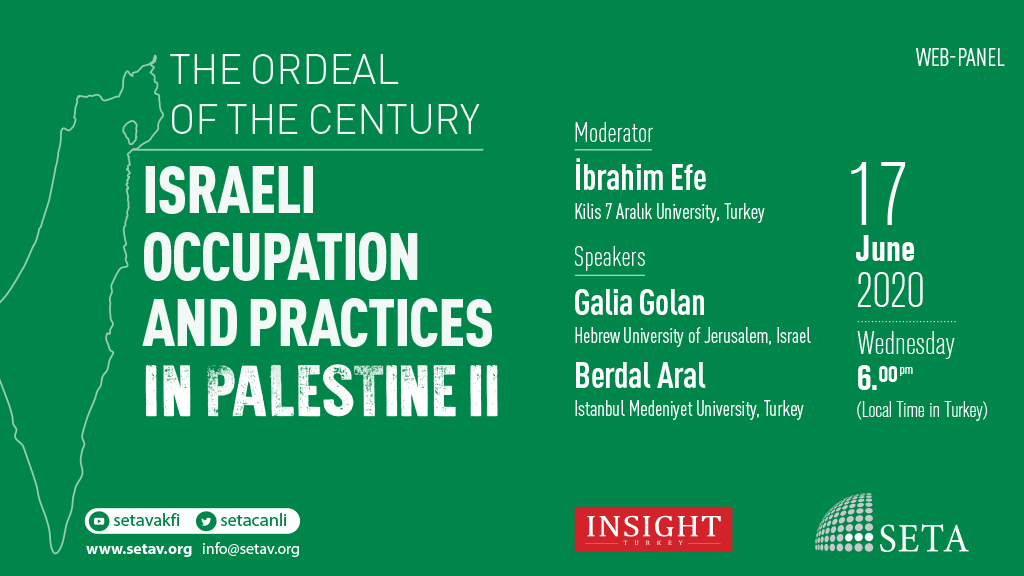 Prof. Galia Golan addresses the obstacles between Israel and Palestine as well as possibilities for peace, primarily the pragmatic 1988 Palestinian Liberation Organization (PLO) decision to create a new state, next to Israel, in the West Bank and Gaza, with a capital in East Jerusalem.

Prof.Golan, on one hand, highlighted the fact that since the United Nations (UN) decided to partition Palestine into a Jewish State and an Arab State, there have been various attempts as well as obstacles to resolve the conflict. On the other, she emphasized some psychological and more concrete barriers to peace between Palestine and Israel. Some of the problems introduced by her are; the identity problem since most Israelis do not consider the Palestinians a nation but rather merely a part of the Arab world, while most Palestinians do not believe that there is such a thing as the Jewish nation, viewing Israelis as Jewish religionists, thus both sides do not see and accept each other as a state.

In order to better understand these claims, our guest firstly underlines the need to acknowledge the existing trauma that lies under the conscience of both sides in Jerusalem; the trauma caused by Israelis towards the Palestinians, even though they find it hard to admit it, while the Israelis still feel the trauma of Holocaust and they tent connect everything to it. Secondly, she proceeded by shedding light on the ongoing problem about the settlements and the security problems of their borders.

While the PLO requires Israel to assume its part in the creation of the issues, the Israeli side accuses them as the only trouble maker actor.  However, Prof. Golan concludes that it takes a firm political will on both sides to find a solution nevertheless for the time being this will is absent from the Israeli side.

Prof. Berdal Aral analyzed the issue mostly from a legal point of view. He argues that without an effective solution, the region will never find peace and that the world is still indifferent towards the peace process and continues to play the three monkeys regarding what is actually happening within the borders of Palestine and Israel.

Our author believes that the presented two states' solution is not the only way of peace. He continues expressing that the 1967 Legal Jew settlements’ were and still are an obstacle to peace, this is said considering the colonial settler population that has invaded zones that were originally left to Palestinians. Therefore, the efforts of the Israeli state’s occupation to have sovereignty in parts of the West Bank are completely illegal. Under International Law, no state has the right to obtain territory by using force.

Furthermore, while the 770 km long and 9 m high wall has resulted in 200,000 Palestinians being dislocated, it also means that the Israelis could easier exploit the Palestinians economically. The American administration has occasionally criticized in the past these types of advancements and settlements, while has also called to put a halt on them.

Prof. Aral finalizes by emphasizing the fact that all Palestinian refugees have the right to return to their homeland under the  Security Council Resolution 273.