Conflicts in the Middle East Since 1945

Conflicts in the Middle East Since 1945 outlines the key low and high intensity conflicts that occurred in the Middle East (ME) from 1947 to 2007. The content is oriented toward the diplomatic, political, religious, social and economic developments in the region. Its scope is very specific, and includes the internal, state-state, regional and global orientations of conflicts ranging from North African Algeria to Iran, the last corner of Middle Eastern country.

Conflicts in the Middle East Since 1945 outlines the key low and high intensity conflicts that occurred in the Middle East (ME) from 1947 to 2007. The content is oriented toward the diplomatic, political, religious, social and economic developments in the region. Its scope is very specific, and includes the internal, state-state, regional and global orientations of conflicts ranging from North African Algeria to Iran, the last corner of Middle Eastern country. The authors are conversant in the security and geo-political dynamics of the region, and the role of local (ideological actors within the state), regional (Arab, Israeli and Iranian) and international actors (Europe, the U.S., the former USSR and Russia). They provide a critical narration of the nodes of agreements and disagreements in key dialogues, peace processes, and understandings for ceasefires between parties of the conflicts in the Middle East, such as Arab-Israel, Egypt-Israel, Jordan-Israel, Lebanon-Israel, PLO-Israel, Iraq-Iran, Iraq-Kuwait, the Arab League etc. The language and vocabulary used in the book is comprehensive, cohesive and descriptive, and stocks a history of key relevant events in a very streamlined manner helping readers build a historical construct of the nature, scope and significance of a number of target conflicts in the Middle East. The authors draw upon Thomas Hobbes’s theoretical concept of ‘war of all against all’ to explicate the phenomenon of unrest, conflicts and wars in the Middle Eas

The book may be criticized for some ideological distortions, biasness and deficiencies in its content. First, the authors take a position by starting their book by mentioning a very radical statement (p. 8) made by General Moshe Dayan, ex-foreign, ex-defence minister and ex-Chief of General Staff of the Israeli Defence Force (IDF), who unilaterally signified the national interest of Israel that ended with a declaration of war with Arabs through harnessing the Western component of Israeli identity for legitimizing its hard-core historical intervention through the invasion and occupation of Palestine. Second, although the authors acknowledge the fact that today’s Middle Eastern borders were artificially designed by the colonial and imperial powers of the West (mostly Britain and France). They describe Arabs as war mongers, war-loving and aggressive to Israel, Iran and their fellow Arabs, ignoring the fact that the Arabs were directly or indirectly engaged and compelled into several low and high intensity conflicts (Arab-Israeli conflicts, Arabs to Arab conflicts, the Suez Canal Crisis, Operation Desert Storm, etc.) through various military interventions, occupations, economic sanctions, arms embargoes, superpower rivalries and the ignition of ethnic violence in the region. Therefore, it seems useless to blame Arabs as responsible for the failure of the peace process unilaterally.

Third, the content of the book seems insufficient, lacking information about some integral questions to be answered, such as; how, by whom and where Jewish terrorist militant groups (who later formed the IDF) were trained to have an effective spirit, tactics and planning for war with Arabs? What and how much military and intelligence support was given to Israel by its Western allies to confront the military threat of the Arabs? Why did the USSR recognize and compromise with Israel at the UN, while knowing it to be a significant member of the pro-capitalist and rival Western bloc? Does Israel possess any religious credentials to be established as a state for Jews or are there any anti-Zionist Jews or anti-Israel Jews in the world, who call Israel as an illegitimate state in the light of last Jewish prophesies? Was the abolishment of the British mandate at Palestine a strategy to indirectly support the cause of the establishment of Israel (as was promised to the Zionist Federation through issuing the Balfour Declaration in 1917) through the controlled demolition of its mandate on the ground and by compromising it at the forum of United Nations (chapter 1 and 2)? Why does the West not hesitate to equip and support some factions of the Kurds’ ethno-nationalist cause despite their disintegration from social harmony and the national cohesion of Turkey, Iraq, Iran and Syria as it cannot afford a similar effort in its own home and why did it not sincerely solve the Kurdish problem earlier under its mandate in the early 1920? (pp. 74-86). It is a very astonishing fact that authors do not provide any information or raise some very basic unanswered questions about Iraq’s so-called and unidentified Weapons of Mass Destruction (WMD) in the light of the collective intelligence and institutional failure of the Central Investigation Agency (CIA) and other international arms inspection agencies (including the UN) to find WMD before invading Iraq (p. 124).

Fourth, besides the deficiencies in the content of the book, there are some ideological discrepancies as well, such as the concept of Jihad in Islam, which is not explained in the light of the original context of Islam, as a unilateral stance of only the radical and highly illegitimate, unpopular, non-serious and non-state armed groups, but is rather described as a legitimate response of the Muslim community (as a whole) to the multidimensional aggression of West. Similarly, the authors mention that the incident of 9/11 revived the Western perspective of ‘clash of civilizations’ and potential conflict with Islam. Moreover, they refer to a very Islamophobic statement made by the Italian Prime Minister to reinforce this concept (pp. 109-110). Similarly, they demonise the Arab population by stating that war and extremism is the way of life of Arabs (pp. 109-110). They further mention that the rise of Evangelical Christianity was not violent compared to the movements for the resurgence of Islam in the Middle East (p. 52). The authors are one-sidedly convinced that Islamists wanted to establish a theocratic state in Egypt and Algeria (pp. 53-55). Therefore, they did not feel any hesitation in justifying the violent aspect of crackdown, suppression and undemocratic actions of the (Western-sponsored) dictators of Egypt and Algeria against the will of the people and local political parties in the respective Middle Eastern countries. The authors are seen as unilaterally preferring the Western way of life, Western democracy, the recognition of Israel and American strategic economic interests as their points of reference for estimating the level of acceptance for Islam and Muslims in the mainstream politics of Algeria, Egypt, Lebanon and Iran. While superficially supporting democracy, the authors do not condemn the dictatorial regimes in the target Middle Eastern countries, who overruled the vision of civilian social and political leadership on foreign policy, security policy, and strategic economic affairs in those countries, and engaged in financial corruption and the degeneration of public institutions (pp. 55-57).

Fifth, the content of the book maneuvers a historical construct of reality through magnifying the biased role of intergovernmental organizations and Western powers through projecting themselves as the real peace-keepers in the region and demonizing religion (mostly Islam), which was often used by non-state religious actors and secular representatives of target Middle Eastern countries. (chapter five and seven). It must be called a distortion of history or a transfer of credit of some historical facts, when the authors mention that the U.S. had ‘trained and armed’ the Afghan resistance movement against the USSR’s occupation of Afghanistan in 1979; the reality is that the U.S. provided sophisticated weapons (mostly stinger missiles) and financial resources along with massive support of its Western and Arab allies to Inter-Services Intelligence (ISI) to uproot the occupation of the USSR from Afghanistan “since” the first quarter of the 1980s, not since 1979 (pp. 38-43). Categorically, the content of the book is not conversant in the intelligence networking of the imperial powers, and is marred by a deficiency in some acquired statistical estimations to gauge key indicators of the strength of economy and the defense of the Middle Eastern countries discussed. Despite the book’s limitations, however, it can be a good textbook for undergraduate students of international relations, political science, international law, public policy, Middle Eastern Studies etc. as it presents a historical discourse of conflict and cooperation in the Middle East from 1945 to date, if the authors consider comments and reviews, and add some relevant chapters on the refugee crisis, the Arab Spring, the modern wave of militancy, and the institutional failure of intergovernmental organizations (the UN, Arab League, OIC, EU etc.) to resolve the crises in the Middle East. 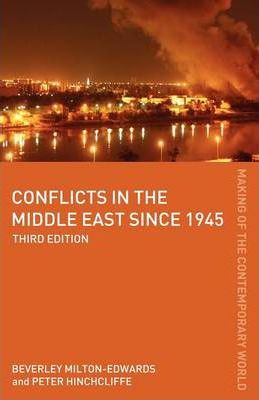 The Logic Beyond Lausanne: A Geopolitical Perspective on the Congruence between Turkey’s New Hard Power and its Strategic Reorientation

A New Alliance Axis in the Eastern Mediterranean Cold War: What the Abraham Accords Mean for Mediterranean Geopolitics and Turkey