Germany, who challenged the British and its allies twice in the first half of the 20th century, began to reemerge as a global political power and to play the “big game” in the wake of the Cold War. As the strongest economy and the most crowded country in the European Union (EU), Germany has decided to lead the EU institutions and the old continent in global platforms. Especially after the reunification of the country, Germany started to dominate European politics. 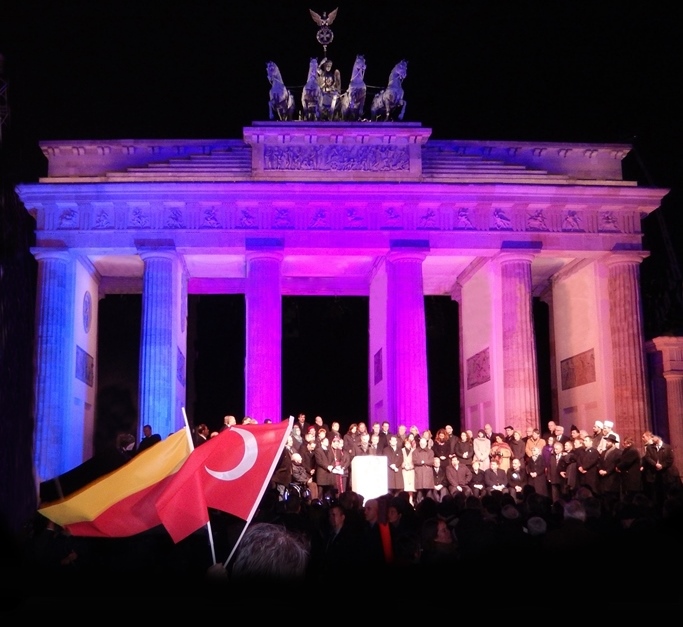 Germany, who challenged the British and its allies twice in the first half of the 20th century, began to reemerge as a global political power and to play the “big game” in the wake of the Cold War. As the strongest economy and the most crowded country in the European Union (EU), Germany has decided to lead the EU institutions and the old continent in global platforms. Especially after the reunification of the country, Germany started to dominate European politics. With the collapse of the Soviet Union and the end of Cold War politics, Germany instigated the European countries to pursue a more independent foreign policy. Getting rid of the Soviet threat, Germany no longer needs NATO and the U.S. protection. As a result we see a Germany which has initiated a multidimensional and multilateral foreign policy orientation in order to improve its worldwide national interests.

As a latecomer to the Middle Eastern game, Germany struggles to benefit from a possible regional reshuffle. Therefore, it prefers to collaborate with regional revisionist political actors such as the Kurds and to challenge any actor that strives for the regional order and stability such as Turkey.

Germany and Turkey compete and even quarrel in many issues; nevertheless, both countries are interdependent and need to cooperate in several areas. Citizens with a Turkish origin or background living in Germany compose a considerable part of the German population and this should be the first area of collaboration between the two states. Since the recruitment agreement in October 1961, Germany developed a different relationship with Turkey and any significant development in one country began to influence not only foreign policy but also the domestic politics of the other state. With time, the citizens with Turkish origin living in Germany have become the source of different developments –both positive and negative– between the two states.

Recently the citizens with Turkish origin living in Germany have been considered as a cause of tension by far-right wing political parties. Moreover, Germany does not permit them (with very few exceptions) to have a dual citizenship, which can be considered as a double standard, if one compares it with countries such as Iraq, which already have the permission for a dual citizenship. The citizens with Turkish origin living in Germany are by now in the 4th generation and their situation leaves a lot to be desired which reflects the value that Germany gives to Turkey.

Two of the main factors that further complicate the situation of citizens with Turkish origin living in Germany are: the continuing racism and Islamophobia issue and being considered as the “black sheep” for every political problem between the two countries. Islamophobia, due to the large number of citizens with Turkish background living in Germany, has turned out to be not only a global and civilizational conflict but also a bilateral problem between the two countries. The extreme right wing movement in Germany is growing in strength and such a development has a political and social impact. Not only does it harm the Turkish-German relations, but also damages the coexistence between Germans and minority ethnic groups living in Germany, especially those ethnic groups with a Muslim background.

The second area of collaboration is the economy. Germany and Turkey enjoy great interdependence in the economic field. With a total trade volume of 34.7 billion U.S. dollars, Germany is Turkey’s biggest trade partner. On the other hand, Turkey is a large market for German products. More than 5.000 German companies have invested in Turkey between 2003 and 2014 and there are more than 80.000 Turkish-origin entrepreneurs active in Germany. Additionally, Turkey is also one of the most favored destinations for German tourists, many of which have bought houses in Turkey.

The struggle against illegal migration flows from the East to Europe –in which Germany is one of the targeted destinations, can be considered as a third area of collaboration. Germany is still Europe’s most powerful member; however, it doesn’t have the ability to manage the refugee issue by itself and needs the help of Turkey, which currently hosts more than 3 million refugees while the number steadily increases.

As was mentioned previously, Germany and Turkey clash in some issues such as the increasing Islamophobia in the West, the Kurdish question and the latest developments in the Middle East. The Kurdish question has been playing a significant role in bilateral relations since the early 1990s. Although Germany recognizes PKK as a terrorist organization, it continuously plays the Kurdish card against the Turkish state. Moreover, the developments in the Middle East have become a source of conflict between Turkey and Germany and the Syrian Crisis –even though they take a different stand– still remains crucial for both of them.

Turkey’s EU bid for membership is also a source of tension between Turkey and Germany. While almost all candidate member countries got their membership, Turkey received a special handling and a bad excuse for not being part of the EU; and Germany –with a few exceptions– has become a burden in Turkey’s accession talks with the EU.

Confronted with many challenges when it comes to defining the relationship between Turkey and Germany, the current issue of Insight Turkey offers a collection of commentaries and articles, which aim to clarify to some extent this complicated relationship. By placing this acquaintanceship in different perspectives such as politics, economic, security, media, Islamophobia and the Kurdish problem, this issue aspires to provide a coherent analysis.

Four commentaries and three articles, reflecting both the German and Turkish stand, can be found in this issue. Mustafa Yeneroğlu and Kemal İnat focus mainly in the political and economic relations of these two regional powers. Yeneroğlu asserts that the refugee crisis has opened new opportunities for the cooperation between Turkey and Germany. However, he argues that in order to have a symmetric relationship, an Intergovernmental Consultation and Strategic Dialogue Mechanism is needed which would help to create comprehensive and permanent relations. Not so optimistic on the current economic relations between Turkey and Germany, İnat stresses that both states should get rid of the trust issues that hamper them, and a greater cooperation can serve well to the economic development of both countries.

Stefan Fröhlich in his commentary provides an analysis of the German role in the region after the EU crisis and provides different future scenarios in this regard. He concludes by saying that the most realistic future scenario for German foreign policy in general and transatlantic relations in particular will be a new Western world, not instead of, but within a post-Western world.

Stephan Sulaiman Wilms and Nina Mühe focus on the social topics such as media and Islamophobia respectively. Media, even though it does not totally reflect the political relations of both states –as Wilms argues, has strongly impacted the German perception of Turkey and in some cases it has been a source of misunderstandings. After analyzing the possible reasons behind this created media perception, Wilms argues that in the future the German media needs to deal with Turkey’s reality and not only with its own perceptions. Nina Mühe looks in detail to an open wound of many societies today. Islamopobia and its impact on German schools deserves a thorough analysis as many young Muslims face different challenges due to the stigmatization of Islam.

Ömer Yılmaz in his article tackles a very fragile topic, the Kurdish issue. He analyses German foreign policy in this regard and argues that while Germany has been critical toward Turkey when it comes to the Kurdish problem, it has tried to develop a strategic partnership with the Kurds in the Middle East, while trying to not offend Turkey. Remaining in the Middle East, Ali Fathollah-Nejad analyses the political and economic relations between Germany and Iran. As one of the closest European partners of Iran, Germany has shown its support for Iran directly after the nuclear deal in 2015 due to the economic cooperation. However, while trying to foresee the future of this partnership Fathollah-Nejad argues that the convoluted international, regional and domestic factors are the main determinants.

In this issue four off-topic articles are also included. Elena Lazarou, through realistic and constructivist approaches, analyses the relationship between Turkey and Brazil and the push factors behind this cooperation. In the other research article, Murat Yorulmaz examines the impact of identity on security by focusing mainly on the case of Kosovo and Macedonia. While the past in both states has been quite bitter and the identity has served as a catalyst for conflict, Yorulmaz argues that the creation of a new identity perception is very important for peace and stability in the region.

Kılıç Buğra Kanat in his article tackles an issue which is scarcely discussed among academicians. The Uyghur issue has begun to grow into a geopolitical and strategic problem for the emerging economic power and regional ambitions of China. According to Kanat, the first step for the solution is only possible if China changes its approach to the issue and relieves its security based approach to the problem.

In the last article, Malik Mufti brings an interesting historical analysis on the similar visions of King Hussein of Jordan and Turgut Özal of Turkey for the region. He claims that two revisionist versions of the neo-Ottomanist ambitions of the two leaders converged in the 1990s. According to Mufti, neither Hussein nor Özal could materialize their respective ambitions.

In conclusion, it is important to understand that both Germany and Turkey –even though they may quarrel in various issues– are strongly interconnected with each other. As a matter of fact cooperation between these two states has the capacity to impact not only the bilateral relations but regional and global affairs as well. We hope that this issue will provide an in-depth analysis of German-Turkish relations and postulate some interesting international topics. With this said, we are confident that the readers of Insight Turkey will enjoy an insightful issue of the journal.

Islamophobia as Cultural Racism: The Case of Islamic Attire in Turkey