Sufism: A Theoretical Intervention in Global International Relations is both a contribution to these issues/debates and an attempt to go beyond them. It is a contribution because it shares the goal of going beyond Eurocentrism. It is an attempt to go beyond these debates because, unlike previous approaches, such as Non-Western International Relations Theory (NWIRT) and post-colonial approaches, it has different goals.

Since the end of the Cold War, growing criticisms of Eurocentrism in Western academia have been complemented with an increasing interest in non-Western traditions of thought. Sufism: A Theoretical Intervention in Global International Relations is both a contribution to these issues/debates and an attempt to go beyond them. It is a contribution because it shares the goal of going beyond Eurocentrism. It is an attempt to go beyond these debates because, unlike previous approaches, such as Non-Western International Relations Theory (NWIRT) and post-colonial approaches, it has different goals. It aims to develop a post-Western IR theory that is (i) not a derivative discourse of Western IR, (ii) does not simply replace Eurocentrism with yet another ‘centrism’ –in other words, it is ‘non-centric’ (p. 42) and (iii) does not generate an exceptionalist discourse. Deepshikha Shahi proposes that “Sufi Global IR theory” can meet such requirements (pp. 5-6).

In Chapter 2, Ali Balcı attempts to demonstrate that, contrary to Husserl’s identification of theoretical knowledge production with European thinkers, non-Western thinkers can also produce theoretical knowledge. Balcı analyzes the ideas of al-Ghazali and Ibn al-Arabi and shows how their perception of knowledge as something that “is not fixed in the nature of things but an interpretation imposed on things” and “how knowledge is produced in/for power-relations” can challenge existing disciplinary limitations and provide innovative ways of understanding the knowledge-power nexus in Global IR. In accordance with the main goals of the book, in Chapter 3 Shahi attempts to show that “Sufi threefold attribute (‘epistemological monism,’ ‘ontological immaterialism’ and ‘methodological eclecticism,’ which are embodied in Rumi’s poetry) can be channelized to cultivate a ‘non-centric’ Global IR theory” (p. 42).

Chapters 4-8 discuss the potentials and limits of the Sufi idea of the ‘oneness of reality’ (wahdat al-wujud). In Chapter 4, Fait Muedini shows how non-dualistic God-world conceptions–particularly the Sufi approach to the ‘oneness of reality’–“can be mobilized to abolish the consciousness of superficial deviations among the so-called Western and non-Western worlds, thereby fostering a more integrated discourse on Global IR” (p. 66). In Chapter 5, Omary Imady focuses on the roles of Sufis in post-conflict Syria, particularly Shaikh Ahmad Kaftaru (1915-2004), and shows how “Sufism can soften sharp politico-religious identities to heal post-conflict societies, thereby also instilling the model of ‘oneness of reality/unity of being’ in domestic and international politics” (p. 86). In Chapter 6, Giuseppe Cecere challenges the “universal potential of Sufism” by demonstrating how “no Sufi of the time (Ibn Sab‘īn, Ibn al-‘Arabī, and Ibn ‘Aṭā’ Allāh) seems to have questioned or condemned the inferior juridical and social status assigned to the Jews and Christians by the sharī’a…” (p. 116). Consequently, he warns that Sufism might reinforce an “Islamo-centric dualism” between subjective-human-inspiration and objective-divine-revelation” (pp. 117-118). Chapter 7 continues with the same challenge. Ayşe Çavdar analyzes the socio-political activities of two Khalidi-Naqshbandi Sufi communities in present-day Turkey, Menzil, and Ismailağa, and argues that “it is somewhat difficult for Sufism to inspire an all-embracing global politics” (p. 124) because “Sufism is not immune to power-politics; in fact, Sufism has potent means to reproduce power-politics at all levels” (p. 124). Engaging with textual and contextual tension in the study of Sufism, in Chapter 8, Meir Hatina shows how the Sudanese Sufi writer and politician Mahmud Muhammad Taha’s (d. 1985) “the replacement of particular historical-contextual certainty with general philosophical-textual virtues” (p. 155) can be useful in resolving this tension.

Chapters 9 and 10 go beyond the ‘old’ question of Islam’s compatibility with democracy and/or the Western world. In Chapter 9, Elena Furlanetto argues that “Islam is not only compatible with the set of visions that have shaped American democracy (such as freedom, individualism, and multiculturalism) but also a constituent part of the American conceptual universe, and closer to its generative moments than it is generally believed” (pp. 161-162). In Chapter 10, R. James Ferguson argues that “a thoughtful appreciation of, and interaction with, the non-European worldview of Sufism can have a progressive impact on Europe’s relational identities, thereby allowing it to pursue a more proactive cosmopolitanism in global politics in the challenging twenty-first century” (p. 182). In the final chapter, Shahi provides a review and assesses the preceding chapters in terms of their contributions to the goals set in the first chapter.

Although the book aims to go beyond Eurocentrism, it can be criticized for its methodological Eurocentrism –even perhaps orientalism– since the authors seem to assume that knowledge of other traditions can be acquired by reading their texts. A text-based approach to certain non-Western traditions, such as Confucian and Hindu traditions, is insufficient because they are more interested in practice and becoming rather than theory and texts. Accordingly, to acquire the knowledge of Confucian or Hindu traditions, one is required to practice them, or become them, not read their texts. This is relevant for Sufism, which also prioritizes practice, experience, and becoming rather than reading texts. This is not to say that the authors in the book are unaware of these issues (see, for instance, pp. 166 and 51); however, they seem to think that these issues do not apply to them. Second, one can point to a lack of engagement with primary sources in some chapters (for instance, in Chapter 5, where it would have been better if Shaikh Ahmad Kaftaru’s sermons or statements were used in the analysis), or reliance on translations (for instance, Chapters 2, 3 and 4 rely on translations of the writings of Ibn Arabi, al-Ghazali, and Rumi). Although relying on translations is understandable to a certain degree, uses of “non-academic” translations, such as those of Coleman Barks, are problematic (this is discussed by Elana Furlanetto in Chapter 9) since “they expunge Qu’ranic references […] thereby uprooting Rūmī’s verses from their specific Islamic tradition…” (p. 166). While Chapter 3 relies extensively on Barks’ translations (see pp. 46, 47, 48, and 50), the author refers to him as “a prominent translator of Rumi’s poetry” (p. 45).

My theoretical critique is related to the main goal of the book, which is to develop a ‘non-exceptional’ (universal) and ‘non-centric’ IR theory deriving from Sufism. This may become problematic for two reasons. First, it narrows down the issue of developing a Sufi IR theory to the discussion of whether Sufism is cosmopolitan enough. Second and relatedly, the discussion of this question either requires that Sufism not be rooted in a particular cultural, religious or political context so that it can be ‘non-centric,’ or that its roots in Islam need emphasizing to show that it cannot be ‘non-centric.’ Analyzing Sufism in either of these ways forms the main axis of much of the discussion in the book. For instance, Chapters 3, 4, and 5 portray Sufism without any centers, like a “‘cosmopolitan meeting point’ between the East and the West” and “as a ‘global cult symbolizing a global community’” (p. 42) that can “abolish the consciousness of superficial deviations among the so-called Western and non-Western worlds” (p. 66), or serve as a ‘good’ mediator between the adherents of different religions and sects. Chapters 6 and 7 show the ‘universal potential of Sufism’ to be dubious because it seems to have a center (Islam), and hence “might reinforce an ‘Islamo-centric dualism’” (p. 118). Finally, it would have been better if the idea of a ‘non-exceptional’ (universal) and ‘non-centric’ IR theory were complemented with a discussion on what theory is, and what the political is, as well as what these could mean from a Sufi perspective.

Nevertheless, bringing together various scholars from different backgrounds and embodying a truly interdisciplinary approach make Sufism: A Theoretical Intervention in Global International Relations a valuable and timely contribution to the increasing interest in non-Western traditions of thought. It will be of interest to IR theorists as well as scholars in other disciplines who are interested in non-Western traditions of thought and is sure to motivate further research in IR that is inspired by Sufism. 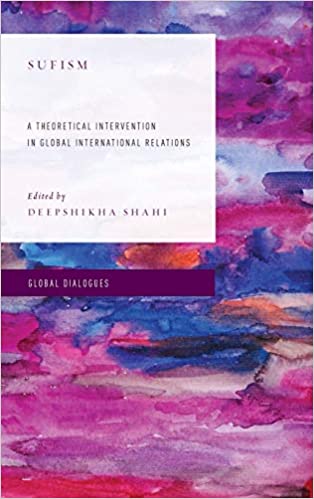 The Seljuks of Anatolia: Court and Society in the Medieval Middle East

A Muslim Mystic Community in Britain: Meaning in the West and for the West