The Liberal International Theory Tradition in Europe promotes liberalism and revives its classical IR tradition, predominantly by presenting liberalism in constructive ways but only with regard to the historical context of Europe in the last 100 years. Thus, this monograph can be criticized for not being objective as it ignores significant critiques of the classical liberal tradition; for instance, the critique that the tradition is incompetent in dealing with religious and cultural differences domestically and internationally.

International Relations (IR) Theory as a discipline is characterized by substantial liberal structures and features. The Liberal International Theory Tradition in Europe covers one hundred years of liberal IR theorizing debates. Despite frequent criticism against the liberal theory tradition, the authors believe this tradition has rarely received sufficient consideration. Thus, the book attempts to demonstrate that liberal international theory has a rich theoretical tradition that often goes unrecognized. The edited volume aims to contest conventional wisdom about the classical liberal tradition; it contains nine scholarly chapters that scrutinize how the liberal IR tradition developed in Europe.

In the first chapter, titled “Introduction: The Liberal International Theory Tradition in Context,” Knud Erik Jorgensen locates the liberal tradition in the discipline of IR and political thought, aspiring to construct associations between disciplinary, theoretical, and intercultural history. He argues that to study the liberal international theory tradition in Europe, the times, spaces, and political-institutional culture in which it developed and flourished are substance to IR theorists; thus, scrutinizing this topic necessitates a systematic and critical examination of its significant terms and a clear identification of its time and place. Jorgensen outlines the research agenda of the book and proposes three correlating axes: liberalism, internationalism, and theory. For him, the agenda of this volume is to use a historical perspective to connect what ap-pears separate in the liberal theory tradition during the last 100 years.

In the second chapter, “Liberal IR Theorizing During the Early Twentieth Century: 1900-1939,” Lacin İdil Oztığ claims that the devastating effects of WWI stimulated many scholars to envisage means to prevent future war. War is considered a hindrance to individual liberty; for this reason, many liberal theorists turned to internationalism to maintain peace and liberate individuals. Oztığ provides insight into the growth of liberal internationalism in the interwar era; she explores diverse scholars from both Anglo-centric and continental traditions. For instance, she reviews the contributions of David Mitrany, who suggested constructing international organizations to prevent conflict and violence. Likewise, she scrutinizes Hersch Lauterpacht, who emphasized the importance of law and morality; Lauterpacht assumed that collective security is achievable if international law is effectively implemented.

In the third chapter, “Liberalism and Domestic Politics Approaches in IR,” Aukje van Loon elaborates on works related to the domestic politics and liberal theory of IR; three explanatory variables are exposed in this regard: interests, institutions, and ideas. The author reminds readers that theorizing in Europe is thoroughly committed to these three variables, which are principal forms of domestic politics approaches. Thus, these three concepts play a leading role in clarifying government preference. Furthermore, she argues that the central liberal perception is that state-society relations reflect government priorities toward international cooperation or conflict. In the period of the Cold War, domestic politics was on the agenda for liberal scholars, which led to advancing European research findings and innovative knowledge in this regard.

In the fourth chapter, “Republicanism and Liberal International Theory,” Kevin Blachford argues that republicanism was crucial in forming European states and identity. Republicanism has had extensive impacts on Political Theory; however, it is less noted in the discipline of IR. For Blachford, the legacy of republicanism in IR must be reassessed, since it complements and enriches liberal IR theory. Republicanism affirms significant local and international conceptions such as active citizenship, the free polis, and liberty. Thus, the republican approach’s advantage is that it extends the understanding of relations between the polis and the international sphere.

In the fifth chapter, “Liberal European Peace Theories and their Critics,” Lothar Brock and Hendrik Simon evaluate three distinctive theories of consolidating peace: peace through modernization, peace through democratization, and peace through international institutions and law. The authors argue that Kant’s contributions impact modern peace theories. For instance, in 1980, Kant’s perpetual peace became a central topic in liberal IR theory. The authors consider critics of liberal peace theory; for example, a state’s self-perception as democratic, peaceful, reasonable, and a ‘force for good’ generates a destructive perception of non-democratic states. This ‘dark side’ has authorized ‘democratic states’ to promote democracy and human rights –in some cases violently. The authors maintain that European liberal peace theories comprise prolific traditions in contemporary IR, international political theory, and International Law.

In the sixth chapter, “Liberal Security Theories,” Kamil Zwolski asserts that liberal European theorists have rich ideas in regard to international security and peace. Zwolski explores the liberal debate on international security and international federalism in both interwar and wartime periods; he distinguishes two strands of international federalism in Europe: one introduced by Richard Coudenhove-Kalergi and the other by British liberal internationalists. Both strands promoted regional integration; however, they disagreed about the objectives and range of that integration. For instance, Coudenhove- Kalergi was concerned only with Europe and did not address the issue of world peace. Zwolski also reviews the functionalist critique of the federalist ideas proposed by David Mitrany. Mitrany was attracted to the League of Nations because it invited all countries to abide by definite universal values, i.e., uniting countries together instead of dividing them, such as the idea of Pan-Europa. Zwolski concludes by stressing that for liberal theorists, integration and institutions embody optimism for a more pacific international order.

In the eighth chapter, “Classical Liberalism and IR Theory,” Edwin van de Haar claims that modern IR scholarship does not acknowledge the richness of knowledge of classical liberalism traditions. For instance, classical liberals’ understanding of human nature is realistic; they did not idealize human nature and reason. The author reminds us that for classical liberals, man is fallible and a social being who cannot live alone. Likewise, for classical liberals, it is not justifiable to expect conflict and violence to be abolished entirely; they did not ask how to eradicate war, but rather how states should deal with its unavoidable existence. Thus, van de Haar advocates for more analysis of the classical liberal tradition by IR scholars based on the classical intra-liberal debate. In the last chapter, “Conclusion and Perspectives,” Knud Erik Jorgensen elaborates on how classical liberals contribute to creating a living tradition –a tradition under current critique from both left and right. Jorgensen affirms that the above chapters reflect how liberal international theory tradition has developed in Europe in the last hundred years while acknowledging the book’s limits–for example, its inability to compare liberal theorizing traditions outside of Europe.

The Liberal International Theory Tradition in Europe promotes liberalism and revives its classical IR tradition, predominantly by presenting liberalism in constructive ways but only with regard to the historical context of Europe in the last 100 years. Thus, this monograph can be criticized for not being objective as it ignores significant critiques of the classical liberal tradition; for instance, the critique that the tradition is incompetent in dealing with religious and cultural differences domestically and internationally. It is not easy for a single book to succeed in the ambitious task of encapsulating a comprehensive reflection on the classical liberal tradition. Still, the book is formative and well-argued in addressing the liberal IR tradition in Europe; it presents a number of significant liberal political theorists and philosophers and relates them meaningfully to timely questions. Thus, it is recommended for academicians and postgraduate students in International Political Theory. To conclude, understanding international affairs necessities an extensive comprehension of liberalism and its tradition. The volume serves this purpose and functions as an effective, historically detailed reading on liberal traditions in Europe. 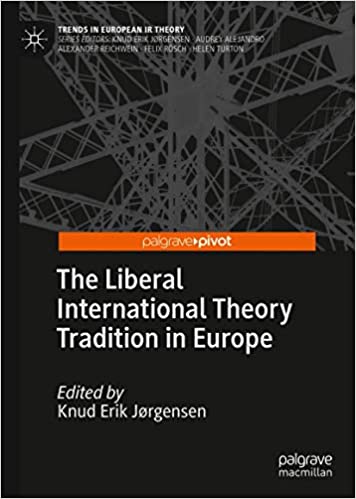