Having attended and observed many procedures relating to the Syrian conflict as a diplomat, author Carsten Wieland sees the matter of humanitarian aid as one of the most challenging issues the United Nations (UN) faced. Taking the UN’s humanitarian aid dilemma as a case study, Syria and the Neutrality Trap explores the discrepancies within international law, the structure of international organizations, and the international system as a whole.

Neutrality and impartiality stand as important factors that can tarnish the reputation of states and international organizations when humanitarian aid is involved in cases such as the Syrian conflict. Wieland asks, how can political and humanitarian decision-makers take a position that is neutral and impartial in terms of international law in the context of a brutal, asymmetric war while attempting to alleviate human suffering (p. 1)? Syria and the Neutrality Trap revolves around this vital question. The author specifically wants readers to know that the book is about the behaviors of various actors in the context of the conflict (ius in bello) but not about who is right or wrong in launching the war in Syria (ius ad bellum) (p. 7). All these points are introduced in the first chapter and shape the book’s core theme.

In the second chapter, Wieland compares other instances of the necessity for humanitarian aid to the ongoing Syria crisis with reference to the literature on this topic. It is helpful to perceive how the UN and certain states behaved earlier in situations such as Bosnia, Sudan, Sri Lanka, and Myanmar, and to explore the degree of similarity or difference between these conflicts and the situation in Syria. In the third chapter, Wieland introduces the relevant international humanitarian and human rights legislation by focusing on the responsibilities of the parties to the armed conflict in Syria in terms of humanitarian affairs. What the author wants readers to realize in this chapter is that theory and practice are often segregated in brutal cases such as Syria (p. 32) and that delivering humanitarian aid to the destitute becomes complex work.

In the next chapter, Wieland explains how international human rights legislation has weakened as a result of the global rise of populism and nationalism in previous decades. This trend undeniably makes it tougher for humanitarian activities to properly function. Meanwhile, sovereignty becomes a hindrance in many ways as the states still being the main actors in international affairs and before mentioned nationalism and populism affect their behaviors negatively.

The fifth chapter mainly focuses on the rhetorical tactics employed by states when dealing with an uprising or even a peaceful protest; first among them is the practice of dehumanizing the enemy. By doing so, states hope that no humanitarian law will hinder their practice of prohibited warfare techniques and that there will be no accountability for those who commit such acts. Dehumanizing the enemy is a common tactic that has been used in international politics, particularly while fighting the ‘war on terror’ since the 9/11 events. In the sixth chapter, Wieland describes the main practice of distributing humanitarian aid in Syria. It is intriguing to see how humanitarian assistance creates a market in which actors such as the Syrian Government, ISIS, and other forces benefit, but the people in need do not.

The UN is the main theme of the seventh chapter, which focuses on the organization’s failures in regard to humanitarian assistance. Wieland notes that the UN has drawn criticism regarding the protection of its agencies, the distribution of assistance, and, specifically, for operating under the help of the Syria Trust, which is run by Asma al-Assad (p. 96). Additionally, he critiques its incompetence in finding a solution or creating an environment in which the parties to the conflict could arrive at one. In the next chapter, Wieland details how the UN has reacted to such criticisms through its introduction of certain regulations, the most important of which being ‘Parameters and Principles of UN Assistance in Syria (P&Ps).’ With the P&Ps, the UN has tried to eliminate all the irregularities affecting the aforementioned problems, and to regain the trust of donor states (those that provide aid funding to the UN), which had grown more and more frustrated by the situation in Syria. The donor states were dissatisfied with the UN’s efforts to provide new alternatives, as Wieland explains in chapter nine; indeed, they only made the situation worse by creating a more complex and contentious context under ‘stabilization’ and ‘reconstruction.’ Bureaucrats and diplomats of political, humanitarian and development departments have diverse priorities and senses of urgency in terms of providing assistance, and the UN’s revised approach has rendered attempts to provide aid even more complicated than before.

In the tenth chapter, Wieland addresses the political and organizational failures dogging humanitarian affairs and the issue of neutrality and impartiality; he explains that the UN system lost the faith of all the actors in the Syrian crisis, such as donor states, agencies, and diplomats in the region as well as President Assad. Russia’s attempts to deploy a kind of soft power in the region –and its failure– are also explored in this chapter. In the eleventh chapter, Wieland proposes some changes to the UN system in terms of humanitarian assistance and advises states in this matter. He remarks that humanitarian issues in the kind of complex dispute like the Syrian crisis could be resolved more easily if more radical options were on the table (p. 131). In the twelfth and final chapter, the author concludes the book by focusing on the lessons about humanitarian aid that can be learned from the Syria crisis. There is no doubt that international law regarding such matters should be revised, as there is no assurance that similar crises will not occur again –as if the ongoing situation in Syria were not proof enough.

Any decision regarding humanitarian aid in this kind of situation has both a political and a humanitarian/legal side. It is hard to neglect this dilemma since it directly affects the practice of providing aid, and the people living under harsh conditions in conflict zones. Wieland brilliantly articulates this dilemma in Syria and the Neutrality Trap: Nothing is as simple as it seems in the documents, legislation, or speeches of leaders and high bureaucrats in the face of the reality on the ground, as Syria has made abundantly clear. If the UN desires to preserve its existence and advance its reputation once more, and if international law wishes to be worthy in its capacity to address international problems, the relevant international bodies must cooperate to close the gap between theory and practice. 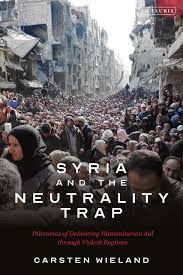