German Orientalism: The Study of the Middle East and Islam from 1800 to 1945

After the introduction, she deals in eight chapters with how modern German universities wrote on the Middle East and treated modern Oriental studies. Wokoeck looked into differentiations in Sanskrit and Semitic languages and the emergence of Assyriologie and Islamic studies. She offers insights into political factors in the Third Reich and draws basic conclusions. The overviews with the names of sholars of universities are most valuable.

The author illuminates us on how the new discipline of Oriental studies and the institutional separation between faculties of theology and philosophy emerged. In her conclusions, she points out the supporting role of the German Oriental Society toward the related scholars since 1845. In addition to this self-oganized support, the German Empire developed a practical need to equip the diplomats with skills in foreign languages since 1871.

Indeed, the Germans followed either French or British examples on Orientalist studies. The striking difference was Berlin’s non-imperial policy and lack of colonies in the Middle East. Nevertheless, the rise of Islamic studies was closely connected to colonial possessions in East and West Africa. Wokoeck mentions the gradual attempt to introduce the study of the modern Middle East as an academic field in German universities. Martin Hartmann, a renown Arabist at the turn of the Century, led this effort which remained, according to the author, a minor trend due to limited travel opportunities after World War One until 1926.

But the most progress made toward modern Middle Eastern studies was achieved in research institutions, which did not belong to universities like the Seminar of Oriental Languages (since 1887) in Berlin and the Colonial Institute in Hamburg. Carl Heinrich Becker, Hugo Grothe, Eugen Mittwoch, and Max von Oppenheim –the latter was not an Orientalist– drove this process ahead. Although most German scholars were not directly involved in colonial administration, a need grew as well as a willingness to train civil servants working in zones under German control in Africa with Muslim populations. Thus, the Colonial Institute of Hamburg was founded in 1908. Carl Heinrich Becker, the father of modern Islamic studies in Germany, held the first chair of Oriental history and culture.

In that same year, Carl Henirich Becker started to lecture on main issues facing modern Middle Eastern policy. All this came ten years after the Kaiser began an official policy on Islam by his visit to the Ottoman caliph. Three trends converged: Berlin’s needs in world policy, Islam as a global power, and the expansion of modern German research facilities. However, all who were involved were plunged into the First World War and lost their innocence. This included traditional academics of universities, who supported the concerted German-Ottoman jihadization of Islam from 1914 to 1918.

In Berlin, the Orientalist trend involved many institutions, clubs, and societies like the German Orient Institute of 1918, the Orient Club in 1920 or the Islam Institute in 1927. Wokeock’s conclusion that Middle Eastern studies, defined as Arabic and Islamic studies, were not properly established in the first half of that century, is disputable. On the one hand, we see continuity in the study of the Middle East and Islam from the Weimar Republic to the Third Reich. On the other hand, some Muslims, who served Berlin during the First World War, remained in Germany and were thus, connected to the German scholars. Other important groups of Muslim immigrants arrived in the big wave of 1920, reinforcing the earlier trend of joint research between them and the German academics.

These groups of Muslims joined the German scholars also in establishing their institutes and societies or enlarging them. This led in Berlin to the reconstitution of the Islamic Central Institute in 1939. The Palestinian Grand Mufti Amin al-Husaini managed to establish his “Jewish” Institute there in 1943. Nazis supported a wide range of Islamic and “Jewish” studies, not to forget the training courses for mullahs in the army and Nazi troops. At the same time, academics drove their Jewish colleagues out and many perished in the ever-growing system of concentration camps.

Wokoeck is generally correct in her conclusions, however one point needs to be clarified. Firstly, the assumption that most scholars in Middle Eastern studies, who stayed and worked in Germany, kept their distance from the regime was wrong (even today we find scholars discussing this and not mentioning the Nazi party’s membership of their subjects). Furthermore, most academics became Nazis: cooperation was the rule rather than the exception. Contrary to the author’s claim, the Nazis did not seem to have any longer term plans to conquer Middle Eastern lands. The Nazis followed chancellor Otto von Bismarck’s tradition of not having colonies but regional rulers to do the job on their own in a pyramid of global power sharing. The Nazis regarded the Middle East only as a battleground as long as other European rivals like the British stayed there but not as an area to build settlements for “Aryans.”

Secondly, the author maintains that many of the very same scholars who worked during the period of Nazi Germany continued to be employed at academic institutions working on the Middle East after 1945. This means that modern Middle Eastern studies in Germany had a Nazi heritage, which needs to be recognized and investigated, including what impact that heritage actually had on German academia in the years that followed the World War II. Usually, it was assumed that scholars did define research topics on their own. The author claimed that the establishment of Middle Eastern studies and its major stages were determined by factors outside the discipline. We add that the Muslims living in Germany since 1900 also had an impact on the unfolding of those studies. The networks between Muslims living in Germany throughout the earlier part of the 20th Century and the German scholars of that same time period are the missing dimensions in the research of this topic. However, Wokoeck’s solid study opens the door to further research on German Orientalism and Middle Eastern Studies for this crucial time period in world history. Historically grounded, well balanced and highly insightful, this analysis is a significant contribution to a long lasting discussion, which since the millennium has become a subject of great international interest. 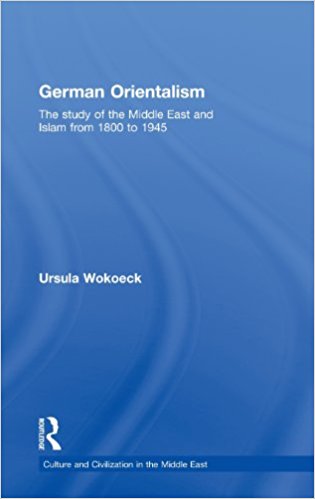