The Ottoman Empire, Stone tells us, initially saw itself as an inheritor of both the Seljuk Turk and Byzantine Greek traditions. Until the conquest of Constantinople in 1453, for example, the Ottomans had thrived as a cavalry-based nomadic “military empire” in the Seljuk tradition; indeed, the plan of the Topkapı Palace they built soon after the conquest—with its modest, low-rise pavilions and courtyards—deliberately imitates the tented headquarters of a nomadic Turkish chieftain. On the other hand, Mehmet II (the conqueror of Constantinople) spoke fluent Greek and was “in effect set upon retaking the eastern Roman Empire that Justinian had made great in the sixth century.” There is also the fact that, at the time of the taking the city, the population of the Ottoman lands was 75 percent Christian.

A more self-confidently “Ottoman” identity developed in the 15th century, particularly under Selim I (known to us rather unflatteringly as “the Grim”, though a more accurate translation of the Turkish “Yavuz” is “stern” or “tough”). His capture of much of the Arab peninsula—in particular the Holy Places of Mecca and Medina—inevitably made the Ottoman Empire more overtly Islamic, and it was during his reign that the Ottomans claimed the Islamic Caliphate from the withering Mameluke state in Egypt. It was also around this time that the Ottoman sultans began to emphasize splendor and grandiosity as their distinctive characteristic, adopting titles such as—amongst many others—"Marcher Lord of the Horizon" and "Shadow of God on Earth".

We associate this grandiosity with the apogee of Ottoman power, especially the long rule of Süleyman I (the Magnificent), stretching from 1520 to 1566. During Süleyman's reign, the empire won a series of blistering military victories and the Ottoman territories reached their largest extent. Süleyman wasn't just a charismatic general of genius, however, but also a formidable organizer of the state machine, known in Turkey to this day as "Kanuni", or "law-maker". "Süleyman's reign", Stone writes admiringly, "mark[s] a synthesis of empire: Rome for the law and organization, Islam for the inspiration, Central Asia for the military." Nevertheless, things were set to change. It's true that a light burns brightest in the moments before it extinguishes, but what happened to the Ottoman Empire after the age of Süleyman wasn't so much a swift extinguishing, but rather an extraordinarily drawn-out decline, lasting until the 20th century.

Stone poses a central question at the beginning of the book: “To what extent was the success of the Ottomans based on Islam, or would you read this the other way round, and just say that the Ottomans were successful when their Islam was not taken too seriously?” You needn’t necessarily answer this question entirely one way or the other. It is true, however, that hand in hand with the long decline of the Ottoman Empire went an Islamic intellectual retrogression, symbolized by the 18th century closure of mathematics and engineering schools and the broader atrophying of scientific enquiry.

It’s also true that, throughout its existence, the empire depended not only on taxes levied on non-Muslim minorities to maintain its impressive bureaucratic machine, but also for the bulk of those conscripted into the elite Janissary guards, and even for Grand Viziers (who often held the real power, as opposed to their often ineffective sultans). Christians and Jews increasingly kept the Ottoman economy going over the 18th and 19th centuries, inevitable when Islam forbade the earning of interest on debts. The “capitulations”—favorable terms offered to Europeans to do business in Ottoman territory—also gradually came to symbolize the stranglehold in which the western European powers were beginning to hold the Ottomans. Initially intended as a sensible method to stimulate trade with outsiders (the product of a self-confident and outward-looking state), they eventually became notorious as humiliating terms which the Europeans exploited to gain further leverage over the declining eastern power. The Ottomans didn’t feel able to abolish the capitulations until World War One, when their empire became as reckless and destructive as great empires tend to do when staring down the barrel of extinction.

Before publishing this book, Stone had already gained some notoriety for his contrarian views on the Armenian “incidents” of 1915-17, and there is no Damascene moment to report here. He characterizes what happened to the Armenians of the Ottoman Empire as just one strand of a theme that was common throughout the Ottoman lands in the late-19th and early-20th centuries. At around the same time as the Turks were massacring Armenians, for example, Muslims were themselves being forcibly expelled and subject to atrocities in the Balkans and the Caucasus; Greeks and Armenians were each also committing their own crimes against Muslim Turks. Thus, Stone seems to think that the Turks’ only problem is one of PR. It was the same story, he argues, during the 19th century, when Greeks and Turks traded barbarities on the Aegean and liberal British sympathy—dazzled by the fashionably romantic Hellenism of the time—sided with the Greeks. If what happened to the Armenians is genocide, Stone says, then so too is what was visited upon the Muslim population of the Balkans and in the territories of the Russian Empire.

It’s true that crimes against the Muslims of the Ottoman Empire receive comparatively little attention from western historians, and Stone is right to highlight them. But what happened to the Armenians really was something altogether different. Comparisons with Nazi Germany won’t do, but it’s an indisputable fact that hundreds of thousands of Armenians did die. “Deportations” is a suitably vague term to describe the deliberate massacre of many, the accidental death of some, and the forced resettlement of many others. The debate will continue (perhaps “rage on” is better) as to the motives and effects of Ottoman policy in eastern Anatolia. There’s surely no doubt, however, that the emptying of all significant Christian minorities from Turkish lands was indeed considered convenient by the Young Turk regime—whether all the killings were deliberate or not—and it set about achieving this by whatever means necessary. Does Stone honestly believe that what happened was a legitimate response to Armenian terrorist activity, as he suggests here?

In his zeal to put forward the unpopular Turkish case, he no doubt goes much too far, and he does the same elsewhere. In the preface, he makes the bizarre assertion that “it’s not really for an outsider to comment” on the state of contemporary Turkish politics. Perhaps this argument makes more sense when you’re a professor in the History Department at Ankara’s Bilkent University. Would he say the same about the United States, I wonder? If not, would he not then be guilty of the same kind of relativism that he’s doubtless critical of elsewhere? The claim seems doubly odd when he does, in fact, go on to make a number of extremely contentious pronouncements about modern Turkey. Shorn of the Kurds, we’re blithely told, the country would become “a Greece and perhaps even a sort of late Byzantium.” Almost as bafflingly, the military coup of 1980—as a result of which 650,000 were arrested, countless tortured or killed, and the seeds sown for the future bloody Kurdish conflict—is limply presented as “the most interesting of all Turkey’s coups” in which “the casualties were very few in number”.

Perhaps what Stone meant when suggesting that “it’s not for an outsider to comment” was really “it’s not for an outsider to criticise”. In which case, more’s the pity. As Kant observed, you show a friend most respect by adopting a policy of sensitive but unswerving honesty, trusting that they are mature enough to respond to such honesty with dignity and equanimity. If Stone had recognized this, his observations on Turkish history—particularly the more recent—would have carried more weight. 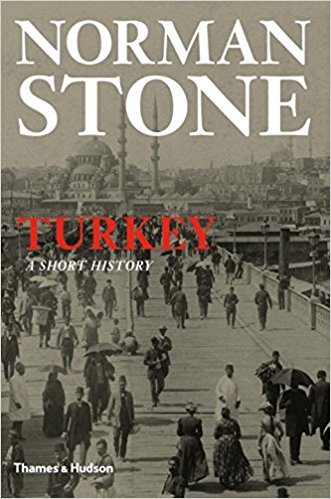