Following a useful introduction, Watts’s first chapter examines how Kurdish activists in the 1960s and 1970s initially began to use electoral politics to further Kurdish cultural recognition and political reforms. “The passage of the new 1961 constitution led to fractures within the ruling elite and the granting of new rights and freedoms that expanded the range of permissible politics” (p. 31). This was the era of the 49ers such as Musa Anter, Yusuf Azizoglu’s New Turkey Party, and, most seminally, the Workers Party of Turkey (TIP) and “its promises of socioeconomic reform and its more open stance on the Kurdish issue” (p. 38). “TIP helped a new generation of Kurdish political elites learn how to play the political game, provided them with a network of alliances and contacts, and gave them access to an array of material, ideological, and human resources they could use to mobilize popular support” (p. 49).

Serafettin Elci served as minister of public works in one of the Ecevit cabinets and famously ‘defamed’ himself by ‘revealing’ that “there are Kurds in Turkey. I am also Kurdish” (p. 44). Mehdi Zana, the husband of today’s famous Leyla Zana, was elected as the independent mayor of Diyarbakir in December 1977. “His campaign and tenure in office constitutes one of the most important early examples of the use of local government to promote a Kurdish rights agenda and to assert a new kind of local representation” (p. 46). However, after the September 1980 coup, “Zana went from the mayor’s office to prison, jailed along with thousands of other elected politicians and activists” (p. 48).

Chapter two analyzes how the first pro-Kurdish party, the Halkin Emek Partisi (the Peoples’ Labor Party, HEP), entered the Turkish political system in 1990. Although Turkish law supposedly prohibited political parties based on race or religion, numerous changes in domestic and international politics still provided new opportunities for pro-Kurdish party activism: President Turgut Ozal’s “civilianization” (p. 88) of the state, the Gulf War in 1991 and creation of a Kurdish safe haven in northern Iraq, and Turkey’s full application to what became the EU were three important examples.
HEP was banned on July 14, 1993, but it was followed by other pro-Kurdish parties including the DEP (banned in June 1994), HADEP (banned in 2003), and DTP (banned in December 2009). “This cycle of formation-closure-formation meant that pro-Kurdish parties maintained an uninterrupted presence in the Turkish political system in years to come” (p. 69). These “pro-Kurdish parties were adamantly secular in both ideology and social composition” which “to some degree reflected the outlook of the parties’ core leadership: urban, middle- and lower-middle-class men and women who had gained status and political capital through professional and civic activities” (pp. 70-71). They all occupied a position between “the Turkish center-left and the Kurdish national movement” (p. 73).

Chapter three analyzes how “entering electoral and party politics brought pro-Kurdish activists unprecedented access to a range of resources that could be appropriated and used to advance the interests of the parties and the movement” (p. 93). “Most legal parties in Turkey receive on the order of 50 to 70 percent of their annual income from the state” (p. 78). “Election to municipal office also provided access to city budgets that could be managed in ways that promoted pro-Kurdish parties and the pro-Kurdish agenda” (p. 79). Funds also became available from the EU once Turkey became a candidate country in 1999. Furthermore, “election to the Turkish parliament provided pro-Kurdish deputies with parliamentary immunity from prosecution, which gave them considerably more protection for expressing their political opinions than movement supporters outside the Parliament had” (p. 81). “Because there was no pro-Kurdish party representation in the Parliament between 1994 and 2007, pro-Kurdish mayors in Turkey inherited the role played by pro-Kurdish parliamentarians” (p. 82).

Chapter four details how Turkish officials sought to prevent pro-Kurdish parties from gaining and using state resources. Despite coordination problems, government coercion often proved effective. “Pro-Kurdish… party administrators and activists were shot, prosecuted, jailed, beaten, fined, and threatened. Parties were closed, party offices bombed, and party property confiscated by the state” (p. 94). After 1999, moreover, state judicial coercion “became particularly onerous” (p. 121). “In June 2007, Sur mayor Abdullah Demirbas, was removed from office… after a unanimous ruling by the Turkish Council of State declared that providing municipal services in both Turkish and Kurdish was illegal” (p. 117). The “politics of polarization and violence promoted by both state authorities and the PKK made it very difficult for the parties to distance themselves from the PKK and to establish an alternative base of authority” (p. 121). Still pro-Kurdish parties won local offices across the southeast in the local elections of 1999, 2004, and again in 2009.

Chapter five describes how pro-Kurdish parties sought to “attribute… the PKK-state conflict to the state’s antidemocratic legal framework, military policies, and Turkish nationalist ideology” (p. 140). Chapter six “argues that pro-Kurdish parties and officials used the resources of local office to try to establish an alternative Kurdish governmental presence and to construct a new Kurdish subject or collective community” (p. 142), “creating the illusion of a Kurdish national state. In fact, they [the pro-Kurdish parties] were still legally bound by the rules constructed by Turkish authorities” (p. 160).

In the conclusion, Watts assesses the result of the pro-Kurdish parties’ attempts to work within the system and offers a short evaluation of their electoral record. “Although the parties did not position themselves as competitors to the PKK and maintained close links to the group, their participation in politics nonetheless provided new depth to the Kurdish movement’s organizational leadership” (p. 164). She concludes that “pro-Kurdish parties’ consistently high performance at the ballot box, in other words, put pressure on other parties to make concessions to Kurdish national demands” (p. 172). The author also says that “many voters in the Kurdish-majority regions of the southeast are sympathetic to demands for democratization and economic development but do not want independence or a political arrangement that would impede their ability to work and live in other parts of Turkey” (p. 177).

Watts’s study stops in 2009 and so does not cover the much-heralded, but failed, Kurdish Initiative of 2009 and the increased support for the new pro-Kurdish BDP in the national elections held on June 12, 2011. Her study still holds relevancy, however, because clearly the Kurdish movement in Turkey, including the still dominant PKK, will increasingly pursue the more legal political path she elucidates. These pro-Kurdish party victories, however, were achieved by running as independents, not formally as parties, because the required 10 percent threshold of all votes cast was impossible for a pro-Kurdish party to achieve. Therefore, it would have been useful for Watts to explain how running as independents in Turkish elections overcomes this barrier. Watts might also have brought in the work of the new, very important Komo Civaken Kurdistan (KCK), or Kurdistan Communities Union, an umbrella PKK organization supposedly acting as the urban arm of the PKK and clearly complementing and/or competing with the pro-Kurdish parties. Despite her frequent mention of the PKK, Watts still might be questioned for not fully appreciating just how much the PKK really is the voice of Turkey’s mobilized ethnic Kurds.

Her study, at times repetitious, might also have drawn upon some of the useful data gathered by the progressive Turkish think tank TESEV, the prescient work of Professor Ihsan Dagi, and the annual EU Progress Reports on Turkey. Nevertheless, her study is well documented, and concludes with a bibliography and an index. 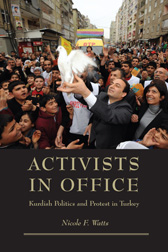