Peter Turchin and Sergey Nefedov’s book focusing on recent theoretical analysis of economic and sociological history, is a text of limitless ambition. In its scope and certitude, this ambition itself is anachronistic, more characteristic of an earlier era of social science in which grand-unified, universal models of history, economy, society and culture were the order of the day.

Peter Turchin and Sergey Nefedov’s book focusing on recent theoretical analysis of economic and sociological history, is a text of limitless ambition. In its scope and certitude, this ambition itself is anachronistic, more characteristic of an earlier era of social science in which grand-unified, universal models of history, economy, society and culture were the order of the day. Both the appeal and the fundamental difficulties of Secular Cycles stem from this outdated aspiration to a trans-historical and trans-societal model of social, political and economic change. In an intellectual and scholastic context in which the subject of the researcher herself is far too often a more interesting object of theorization than phenomena in the social world, Secular Cylces evinces a refreshing willingness to cross both disciplinary boundaries and historical eras. Unfortunately, however, this daringness is not complimented by an acute, reflexive awareness of the very critiques of social science that have made such universal arguments largely passé.

Turchin and Nefedov’s primary analytical contribution is the category of the ‘secular cycle,’ an ideal type in the Weberian lineage that both describes and explains longterm socioeconomic change. The authors’ unit of analysis is the agrarian society over a period of several centuries; the ‘secular cycle’ designates the demographic, economic and political process of waxing and waning that, Turchin and Nefedov argue, such societies experience on a relatively predictable basis. As an ideal type, the secular cycle traces a pendulum from growth to decline (in the authors’ terms, ‘integration’ and ‘disintegration’), which consists of four distinct phases: expansion, stagflation, crisis, and depression. (p. 33) The cycle itself pivots at the nadir of any depression, which can equally be identified as a moment of nascent expansion. Particular demographic, economic, political, and sociocultural trends characterize and define any given phase of a secular cycle. For instance, during a period of initial expansion, land cultivation increases, rent is low, and the strength of the state achieves consolidation. Conversely, during a crisis phase, cultivation and population begin to decline, and the state typically collapses.

Secular Cycles’ four case studies—medieval and early modern England, medieval and early modern France, republican and early imperial ancient Rome, and imperial Russia—demonstrate the analytic power and principles of the secular cycle lucidly and persuasively. For a non-specialist, these specific contexts hold little inherent interest, but their relationship to Turchin and Nefedov’s theoretical intervention is clear. Moreover, the authors’ precise, faultlessly disinterested presentation of their data avoids both the Scylla of Malthusian demographic pessimism and the Charybdis of Marxian teleological utopianism—an aspiration that they forward in their introduction. Both their method and their object of inquiry are reminiscent of Ferdinand Braudel’s famous study of the “longue durée,” although their more immediate inspiration and interlocutor is the American historical sociologist Jack Goldstone. And while Secular Cycles’ material and argument is decidedly Eurocentric, there are moments of unique interest for the student of Middle Eastern and Islamic history—most notably, the authors’ fascinating discussion of “Ibn Khaldun Cycles” and their assertion that Muslim polygyny necessarily affects socioeconomic cycles by providing an ineluctable encouragement to “elite population growth.” (p. 23)

Methodologically, Secular Cycles rests on rather weak, problematic ground. Most distressingly, Turchin and Nefedov’s four principal categories of analysis—population, elite dynamics, the state, and sociopolitical instability—which define the trajectory of a secular cycle, are each different in kind and require distinct types of abstraction from historical data. For instance, while the demographic data that determine population change may not necessitate significant hermeneutic acrobatics, this easy movement from data to analysis does not apply to the other three categories. In other words, concepts such as ‘the state,’ ‘the elite,’ and ‘instability’ are not mere historical givens—they demand interpretive interventions and decisions on the part of the historian herself. Thus, when Turchin and Nefedov propose that “the simplest method for quantifying sociopolitical instability is to plot the number (per unit of time) of ‘instability events,’ such as peasant uprisings, regional rebellions, coups d’état and civil wars,” (p. 307) their model smuggles in an unacknowledged hermeneutic regimentation of the definition of ‘instability,’ masked as an objective, quantifiable

‘datum.’ This is not to say that uprisings and rebellions are not indices of instability, of course; it is merely to question the principle by which some overt markers of instability achieve visibility and effectiveness within Turchin and Nefedov’s model, while other less explicit forms of ‘instability’ are excluded. One could make similar observations about the concepts of the state and the elite that—and this is the key point—the authors present as historically-given objectivities. Beyond this conceptual critique, Secular Cycles also struggles with vast variation in the quality and quantity of the data itself, a difficulty that, to their credit, Turchin and Nefedov expressly acknowledge.

What, then, should the reader make of Secular Cycles’ ultimate goal to resurrect, through rigorous comparison and careful sifting of data, the unfashionable aspiration to nomothetic history? Turchin and Nefedov mince no words in evaluating the import of their study—boldly, the final line of the book reads, “We are optimistic about the future prospects of history as science.” (p. 314) I must confess a deep skepticism here. Although I am inclined to agree with the authors’ assertion that there is “some sort of general regularities of the historical process,” their theory and method for demonstrating these regularities entirely fails to address the hermeneutic dialectic of historian and history. Turchin and Nefedov’s ginger avoidance of an extension of their analysis into the industrial revolution and political modernity hints at an intuition of this problem on their own part, but they are ultimately incapable of reckoning with the constructed nature of their own cardinal categories. Concomitantly, the reader is left to wonder how a historian of a different inclination, with a keen eye toward the difficulties in transposing modern social and political concepts, such as the state across vastly different historical epochs, might interpret Turchin and Nefedov’s data. As it stands, the concept of the secular cycle seems both too abstract to render the texture of sociopolitical change in any given historical period, and too timid to confront the radical transformations of modernity. In as much as these transformations ultimately yielded the differentiated categories of state, society and economy that inform Turchin and Nefedov’s arguments, they deserve the authors’ attentions. But on the rare occasions that Turchin and Nefedov peer over this conceptual abyss, they quickly scurry backward into the language of quasi-objective certitude. Unfortunately, Secular Cycles’ disavowals make it exceptionally difficult for the reader to share this certitude with them. 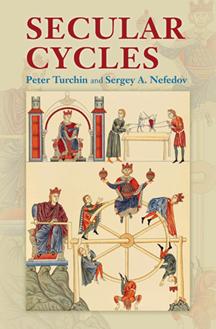