The discipline of International Relations (IR) has been subjected to various questions, challenges, and reformulations in the recent past. Certain paradigmatic challenges emanate from various theoretical orientations that question the foundations of mainstream IR.

The discipline of International Relations (IR) has been subjected to various questions, challenges, and reformulations in the recent past. Certain paradigmatic challenges emanate from various theoretical orientations that question the foundations of mainstream IR. A different set of criticisms flow from questioning the European-American bias of the discipline. There have been recent strides in terms of changing IR’s focus from the major powers of the West to the so-called peripheral countries. However, such a change and supposed inclusiveness does not apply to the theorization of IR. The book under review contributes toward such a shift; it seeks to bring out what the margins or the periphery has to offer for theorizing IR. The subtitle Homegrown Theorizing refers to the task of bringing out the “original theorizing in the periphery about the periphery” (p. 4). The book is an outcome of a workshop convened in 2016 at the Center for Foreign Policy and Peace Research, which included participants who sought to go beyond conventional ways of theorizing. Building upon homegrown perspectives, the selection of essays in the book present new insights toward theorizing IR.

The book is divided into three parts, which engage with three different strands of homegrown theorizing. The first part seeks to review the existing debates that contribute toward non-Western perspectives in IR (p. 4). The first chapter provides a very precise and useful typology for homegrown theorizing and divides it into three groups: referential, alterative, and authentic (pp. 18-27). The typological grouping seeks to club sets of theories on the basis of refence point, contextual transformation, and conceptual originality. The next chapter questions the so-called hegemonic nature of the discipline and its focus on the “value of theoretical knowledge” in the context of globalizing the discipline (p. 53). The final chapter of the first part engages with problems in orthodox theorizing and the lessons drawn from such problems. It also provides an engagement with the realm of knowledge production and theory building, and concludes with specific ‘steps’ that should be followed to avoid the fallacies of “Western core IR scholarship” (p. 72) in taking the homegrown turn.

The second part of the book examines the status of IR theorizing. It consists of four chapters dedicated to the individual cases of Iran, Japan, China, and South Africa. The specific concepts based upon these countries’ specific indigenous agendas form the core of the chapters; they all dwell upon contextual specificities and neglected, undertheorized concepts. The chapter on Japan specifically engages with the implications of post-Western theorizing that question IR’s conventions and orthodoxies (p. 136). The last part consists of three chapters that present attempts at original or authentic homegrown theorizing. The first chapter uses the cultural semiotics of the Tartu school to retheorize IR (p. 159). It elucidates the applicability of semiotic analysis in “scrutinizing cultural underpinnings of political momenta” (p. 172). The second chapter engages with the Kyoto School of Philosophy and seeks to contribute to an alternative IR. Picking examples from Japan, Taiwan, and China, the chapter examines attempts at breaking or transcending the hegemonic nature of IR theorization through the use of Philosophy of Place (p. 177). The author further distinguishes this approach from mainstream IR theorization and explains the predictability potential thereof (p. 198). The third chapter engages with ‘conceptual cultivation’ in the study of international relations and argues in favor of forming concepts as ‘ontologically crucial’ (p. 205). One such concept that the chapter cultivates is that of ‘influence,’ which goes beyond conceptual exclusivity in the discipline. The concluding chapter by the editors does an excellent job of bringing together the wide array of arguments. It clarifies the meaning and scope of the terminologies, identifies the fallacies of homegrown theorizing, and ends by providing essential “practical recommendations” (p. 232).

The book is a breath of fresh air for the orthodox nature of the discipline of IR that has long been preoccupied with the explanatory dimension. The collection of essays stays true to the book’s initial commitment: they break away from the conventional domain of IR theorization and provide a newer outlook. The chapters are eloquent in their assertion; they begin by presenting the methodological dimension of homegrown theorizing, move towards exposing the fallacies of orthodox and mainstream theorizing, and conclude by presenting authentic attempts at homegrown theorizing.

One issue that is apparent in the chapters –and acknowledged by the editors in the concluding chapter– relates to the geographical idea of periphery. Even though the editors define the periphery non-geographically, the contributions and assertions throughout the book differ from such a claim. The chapters specific to authentic theorizing cover only Iran, Japan, China, and South Africa. A cursory mention of India is found in the introductory chapter. The omission of other relevant localities could hinder the aspiration of a true post-Western IR theorizing. However, this limitation could also serve as a major beginning point for homegrown theorizing from other parts and peripheries of the world. The editors are modest in acknowledging the pitfalls of potential fragmentation of theories and caution against it.

Another issue pertains to the ‘pragmatic’ use of Kenneth Waltz’s definition of theory (p. 43), which ends up reifying the mainstream which is supposedly the position of departure. Some chapters tend to fit in this mainstream definition of theory, which is also selectively remodeled. According to Waltz’s definition, theory is viewed as an ‘intellectual construction’ to select and interpret facts.1 While some contributors praise the predictability of their homegrown theory, they selectively omit the point about generalizability, which is another feature of theory as outlined by Waltz.2 A little clarification in this regard would have been helpful. Minor typographic errors are also visible, (e.g., pg. 5, line 27), should read ‘In Chapter 5’ instead of ‘In Chapter 4’ (p. 5).

Overall, the book presents a much-needed avenue for potential homegrown theorizing in international relations. The new breed of researchers in IR will find the typology of homegrown theories presented in the initial chapter, and the idea of conceptual cultivation in the penultimate chapter, most helpful. Widening the World of International Relations is a refreshing contribution to the scholarship in IR that unwinds the orthodoxy, questions the hardened epistemologies, and attempts to de-monopolize and retheorize IR. 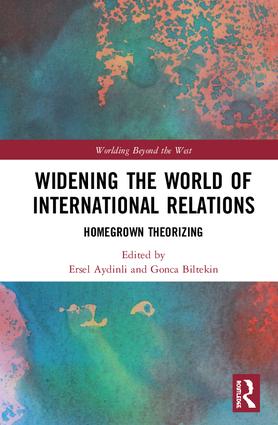