Corm starts his discussion by showing the diversity of a region that has existed at the geographical level since ancient times. For a complete account of this complex geography Corm examines the “geographical foundations” of the region. Hence, the book has given a lot of attention to what Corm refers to as the geographic “arabesque” that has historically characterized the Middle East, in which the Anatolian, Iranian, Mesopotamian, and Egyptian empires were built. As a result, in the first part of the book Corm examines the Mesopotamian, Anatolian, Iranian and Egyptian civilizations as the major strata of Middle Eastern history.

Corm’s account of the history of the Middle East reflects the “geology of cultures.” Corm criticizes the consideration of Muslim society in the region as if it were one unified ethnic or national body. The second chapter of the book is entirely dedicated to the exploration of the Middle East as geology of cultures with extraordinary cultural wealth and population complexity. According to Corm, the Middle East is a land of great diversity, a mosaic of different cultures and therefore it cannot be reduced to a uniform bloc. In this regard, it is problematic to view the diverse societies of the region as one, which presupposes that Islam is a living, unified being that exists in a precisely defined territory. In his opinion, religion is misused to explain purely political issues. Corm views Islam as only one aspect of the development of Muslim societies. He argues that numerous actors have been exploiting Islam in order to preserve their power, and that this is not the fault of the religion.

Part two of the book goes from the rise of the Western powers in the 18th century to the present day. In this book, the dynamics of the relationship between the West and the Middle East are explained from a Middle Eastern perspective. Corm argues that the main geopolitical and historical roots of the idea of a divide existing between the Middle East and the West did not originate in the clashes of religious and cultural differences as argued by Samuel Huntington, but came rather from the historical traumas they suffered. Anglo-French rivalries of 1919-1956 period, US-Soviet rivalries in the Cold War and the American domination of the post-Cold War era have determined the recent state of affairs in the region. Through the five chapters of part two, Corm overviews the engagement of the competing Western powers in regional affairs. In this part Corm examines the major events that have shaped the modern Middle East, namely European mandates, the Arab-Israeli conflict, the first Gulf War and the US invasion of Iraq following 9/11. Besides these major events Corm also highlights some other socio-economic factors including the rise of Pan-Arabism during 1950s and 1960s, the existence of oil resources in the region, and the imposition of democracy by the Western powers.

Last but not least, part three deals with the question of how to address the complexity of the Middle East. In this part Corm discusses the methodological difficulties of writing the history of the Middle East, and the causes behind the decadence of Middle Eastern civilisations. In the last part of the book, Corm explores the advent of Islam, Western influence, socio-economic factors and sweeping upheavals as the main causes behind the decadence of the civilisations in the region. Mainly, European colonialism and Western interventions in the Middle East is seen as powerful obstacles to the dissemination of the principles of modern governance and democracy in the region. Corm concludes arguing that the tension between the adherents of liberalism and the supporters of the authoritarian rule of a religious order will remain as long as the democratic West continues to offer interest-based justifications in its relations with the countries of the Middle East.

Overall, this book is a good source for scholars and students as well as policymakers who seek a deeper understanding of the Middle East and its relations with the West. Corm has stepped outside the box and engaged in a wider discussion of how to address the complexity of the Middle East from a historical perspective. At the end of his depiction of the Middle East, Corm concludes that unless some drastic changes occur in relations with the West, it is likely that the games of power and rivalry, and the phenomena of oppression, will continue to characterize the region, plunging it into decadence. 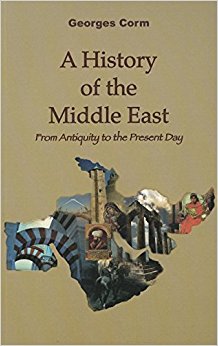