A Millennium of Turkish Literature: A Concise History

In this little book Talat Halman continues his lifelong campaign to acquaint the English-speaking public with Turkish literature. This introduction is intended for readers who know nothing about the subject and do not have the time or interest to read a more in-depth study. Inevitably, it occasionally bogs down into long lists of names, but on the whole it is surprisingly readable.

In this little book Talat Halman continues his lifelong campaign to acquaint the English-speaking public with Turkish literature. This introduction is intended for readers who know nothing about the subject and do not have the time or interest to read a more in-depth study. Inevitably, it occasionally bogs down into long lists of names, but on the whole it is surprisingly readable.
The title is perhaps a little bit misleading. Yes, Turkish literature in some form has existed for a thousand years or more. However, most of the early literature was transmitted orally for centuries and was not consigned to writing until much later. Furthermore, the term Turkish literature is used to describe works written in at least three very different forms of the Turkish language: (1) the Turkish of the common people, in which many of the best- known traditional song lyrics, proverbs, folk tales, and the scenarios of the shadow puppet and orta oyun plays were com-posed; (2) the Ottoman Turkish language of the court, which produced a rich tradition of highly stylized poetry on themes of love and mysticism, as well as scholarly treatises; and (3) the so-called Öztürkçe, or “pure Turkish”, created by the government-mandated language reform beginning in 1928. Besides changing the written form of the language from the Arabic to the Latin alphabet, this reform eliminated most Arabic and Persian words, replacing them with neologisms ostensibly based on old Turkish roots. Ottoman Turkish was unintelligible to the vast majority of the populace who were, in any case, illiterate (“the rate of literacy remained below 10 percent until the mid-1920s” [p.58]), so that all works written before that date were necessarily addressed to an elite minority. Most of the great Ottoman poets wrote poetry in Arabic and Persian as well as Turkish. Celaleddin Rumi, arguably Turkey’s greatest poet of all time, and certainly the one best known outside of Turkey, wrote almost all of his poetry in Persian. The language and alphabet reforms rendered all Turkish literature written before the 1930s—including even the speeches of Atatürk—unintelligible to all but specialized scholars. The revolutionary ideology of the Turkish Republic likewise demanded a clean break with Ottoman tradition, so Turkish authors from the 1930s on found most of their inspiration in modern Western European—especially French—literature.

The gulf separating popular oral literature from the elite literature of the court was also reflected in the values embodied in the two literary traditions. According to Halman, “one could conceivably regard the corpus of folk poetry as a massive resistance to or a constant subversion of the values adopted by the Ottoman ruling class” (p.29), while “the conformist poets, perpetuating the same norms and values century after century, offering only variations on unchanging themes, and looking to virtuosity as the highest literary virtue, wrote celebrations of the triad of the Ottoman system: dynasty, faith, and conquest” (p.44).

Like other Muslim peoples, the Turks have always valued literature—and particularly poetry—above all the other arts. During the 19th and early 20th centuries, Turkish poets often championed the causes of freedom, justice, and equality, and many of them therefore suffered persecution, imprisonment, and exile. Until recently, poetry was the literary genre most prized and cultivated by Turkish intellectuals. Halman notes that since its founding in 1923 the Turkish Republic has “witnessed the publication of tens of thousands of poems in periodicals and many thousands of poetry books by hundreds of poets” (p.118). He does an excellent job of describing the major trends in modern Turkish poetry and the distinctive contributions of the most important poets. Prof. Halman is at his best when writing about 20th century poetry as he is himself a distinguished poet—both in Turkish and in English—and is responsible for many of the excellent translations of poetry in this book.

In spite of the fact that it can boast of such world-renowned writers as Nazım Hikmet, Yashar Kemal, and the Nobel laureate Orhan Pamuk, Turkish literature still does not deserve to be ranked among the world’s great literatures. Halman details the problems that have impeded its progress as follows: “cultural convulsion (cataclysmic changes in sociopolitical institutions, faith, and technology); language crisis (a vast transformation, broader then the language reform undertaken by any other nation, in which a vocabulary that consisted of 75 percent Arabic, Persian, and French words in 1920 increased its ratio of native words to 80 percent and reduced borrowings to only 20 percent by 1970, and the language functioning at the turn of the twenty-first century has about one hundred thousand dictionary entries), critical gap (despite some fine critical writing, Turkish literature still operates by and large without the guidance of coherent aesthetic theories and systematic critical analysis); traditional lacunae (the noticeable absence of philosophy, of the norms of tragedy, of psychological analysis in depth); and excessive imitation of models, movements, and major works that have evolved in the West” (p.135).

A particularly valuable feature of this book is the “Suggested Reading” list, a chronological list of translations, anthologies, histories, and critical studies of Turkish literature published in English from 1850 through 2010. Although it is not exhaustive, it does include the most important works and demonstrates the very significant rise in interest in Turkish literature that has taken place in recent times: “whereas about twenty titles were published in English from 1850 to 1950, the first decade of the twenty-first century has seen the publication of more than one hundred titles” (p.139). 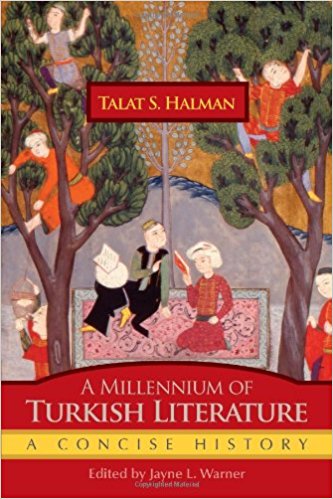