The book under review is the product of the research findings and discussions of the Workshop for Armenian and Turkish Scholarship (WATS) initiated by a group of faculty, including Professors Fatma Müge Göçek, Gerard Libaridian. and Ronad Sunny. In addition, they are also contributors to the book and graduate students at the University of Michigan, Ann Arbor.

The book under review is the product of the research findings and discussions of the Workshop for Armenian and Turkish Scholarship (WATS) initiated by a group of faculty, including Professors Fatma Müge Göçek, Gerard Libaridian. and Ronad Sunny. In addition, they are also contributors to the book and graduate students at the University of Michigan, Ann Arbor. They participated in a series of meetings of the Mellon Foundation Sawyer Seminar on Mass Killing organized by Norman Naimark, which was held for over six years at Stanford University.

The book brings fifteen articles together in five parts: Histographies of Genocide, On the Eve of the Catastrophe, Genocide in the International Context, Genocide in the Local Context and Continuities. Among the authors are four Turkish scholars, some of which refuse to label the events of 1915 as genocide and prefer the terms of extermination, mass killings, demographic engineering, or massacres. However, the absence of prominent scholars, who are close the Turkish position, such as Hakan Yavuz, Justin McCarthy, Guenter Lewy, Mehmet Perinçek, Heath Lowry, Erman Şahin, and Jeremy Salt prevent readers from learning about the other side of the controversy. They could have greatly contributed to this work through their profound knowledge and analyses.

In his preface to the book under review, Norman Naimark, makes a number of incorrect assertions that are surprising coming from a history professor teaching at the prestigious University of Stamford. First, Naimark falsely accuses Turkey of complicating archival access and intimidating scholars from engaging research on events of 1915 (p. xiii). As a matter of fact, Ottoman Archival Sources, particularly the Irade Collection, Mesail-I Muhimme (Important Issues), and the Bab-i Asafi records that includes Kilise Defterleri (Church Registers) for the years 1869-1921 and Gayri Muslim Cemaatlere Ait Defterler (Registers on Non-Muslim Communities) for the years 1830-1918 are accessible to any scholar, including the most pro-Armenian ones. For instance, Taner Akçam, one of the well-known pro-Armenian Turkish scholar, used sources from the Turkish State Archives for some of his works.

Second, Naimark mentions “Islamic religious prejudice against infidels” and Young Turk ideology that “contained elements of racial superiority of Turks” were important factors of the alleged Turkish hostility towards Armenians (p. xv). Apparently, Naimark did not into consideration that an essential part of the Ottoman ideology was to place la raison d’état above of any religion and ethnicity and organized non-Muslim minorities’ internal affairs and relations within the state through the Millet System. Consequently, Naimark misses very simple facts about the Young Turks. Founded by the secular, positivist, petite bourgeoisie, the Young Turk movement contained several non-Turkish military and civil officials like Ibrahim Temo of the Albanian origin, Immanuel Karasu of Jewish origin, Abdullah Cevdet of Kurdish origin, and Aziz Ali Misri of Arab origin. What united them was not a goal of creating an ethnically pure Turkish nation state but the aim of modernizing the Ottoman state and creating a notion of Ottoman citizenship, regardless of ethnicity and religion.

In a review of this length, it is impossible, naturally, to comment on each of the fifteen essays in the volume, but particular attention can be given to certain assessments. The strongest essays in the book are those by Astorian, Adanir, and Holquist. Astorian’s piece examines hitherto the understudied agrarian relations in Anatolia in 19th century and its effects in the deterioration of Armenian –Turkish communal relations. Adanir reveals that Ottoman Christians’ resistance to universal conscription initiated with Tanzimat Fermani of 1839– Edict of Gulhane, and their collaboration with Ottoman State’s enemies in the Balkan Wars brought an end to Ottomanism as a multi-cultural project. Holsquist’s contribution, in which he exposed the Russian Army’s massacres of Turks and Muslims in the Caucasus and Eastern Anatolia, in the presence of Armenian regiments in the Russian Army and Russia’s “hypocritical” relations with Armenians are important.

One of the contributors, Libaridian, fails to understand the development of Turkish nationalism that he held responsible for the disintegration of the Empire and the sufferings of the Armenians. Even after the loss of population and territory, which accelerated in the late 19th century, as results of nationalistic rebellions of the Greeks, Bulgarians, and Serbs, the Ottoman Empire was still trying to produce un-nationalistic solutions to keep what was left of its vast empire together. When the catastrophic defeat in the Balkan Wars finally galvanized the creation of what we can call ‘proto-nationalism’ in the Turkish intelligentsia and the ruling Ittihat ve Terakki-CUP, almost all other constituents of the Empire had already developed their ‘full–nationalisms.’ Libadirian also claims that CUP’s failed to meet agrarian and administrative reform demands from the Armenian Hnchak and Dashnaktsuitun after the II. Mesrutiyet of 1908 -Constitutional revolution (p. 109-111) led Armenians to ask for assistance from the Great Powers (p. 112). Having come to power in 1908, CUP experienced tremendous problems because of the Bosnian Crisis of 1908, the Cretan Crisis of 1908, the Italian occupation of Libya in 1911, and the Balkan Wars in 1912-1913. Needless to say, CUP neither had the time nor the financial and administrative means to reform the country in line with the Armenian parties’ demands.

Üngor, in his piece, which is the most anti-Turkish, biased, and unscientific among all these pieces draws a very long list of alleged Turkish nationalist violence in the era of nationalism. His “incomplete list” includes the anti-Bulgarian and anti-Greek boycotts of 1914, the 1916 crackdown on Arab-nationalist and Zionist groups, the 1921 Koçgiri massacre, and the 1925 massacres and deportations of Kurds, etc… (p. 289). Üngor, obviously, labeled any sort of bloodshed, including the suppression of separatist rebellions like the Koçgiri Rebellion of 1921 and Seyh Sait Rebellion of 1925 as an extension of “devilish racist Turkish intentions.” Üngor also claims that in 1915 the mass deportation of Kurds was also ordered. Noting that it was well known that Kurdish tribal forces were very active against the Armenians in Eastern Anatolia, both before and after 1915. Moreover, the claim which comes from another prominent pro-Armenian scholar Hans-Lukas Kieser’s book, entitled Zwischen Ararat und Euphrat: Abendländische Missionen im spätosmanischen Kurdistan (Between Ararat and Euphrates: Occidental missions in late Ottoman Kurdistan) is far from being credible.

Gaunt, made his “claim to fame” with his works on the “so-called Assyrian genocide” by the Ottoman Empire. He starts his article by condemning the Great Powers for not granting Assyrians their own state or helping them to organize an independent state with the Kurds (after the Ottoman defeat in WWI), despite the fact that they joined the Allied campaigns against the Ottoman Empire (p. 244). Yet, he fails to explain to the reader how the Assyrians would be able to form a joint state with the Kurds, whom he repeatedly points out to be the main perpetrators of the mass violence against the Assyrians themselves (pgs. 245, 247, 248, 249, 250, 254, 255, 256, and 257). According to the Assyrian delegation that attended the Paris Peace Conference of 1919, there were 250,000 deaths, but Gaunt states that figure is too low and estimates higher numbers. However, he fails to provide any document or scholarly work to support his contention (p. 245).

The book that includes (only) one map, an index, preface, and introduction sections lacks a bibliography and a conclusion chapter. Despite all the shortcomings mentioned above and not included in this review, the volume is still a useful read for those who are interested in deepening their understanding of the highly controversial and politicized events of 1915. In particular, I would suggest this as a reference for pro-Turkish scholars who want to further their understanding of the Armenian side of the controversy. 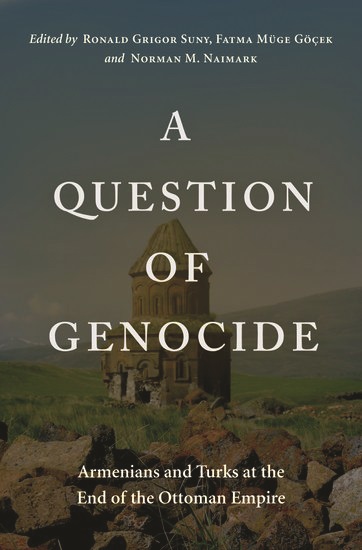