Breakout Nations: In Pursuit of the Next Economic Miracles

In the last decade, the world has witnessed an unprecedented development of many countries. The speed of this process has not only caused surprise but also has generated questions: How did these countries manage such significant improvements?

In the last decade, the world has witnessed an unprecedented development of many countries. The speed of this process has not only caused surprise but also has generated questions: How did these countries manage such significant improvements?  Why have some other countries failed to reach a similar level of success during the same period? How long could this rapid development last? Ruchir Sharma answers these issues, explaining the common reason for rapid development during the last decade and also the country-specific internal dynamics behind the rapid development of countries such as China, India, Brazil, Turkey, Russia, Mexico, and South Korea. Finally, He also identifies the potential breakout nations for the next decade.

At the beginning of the book, to present the whole picture, the author combines different factors that he distilled from his analyses of different countries:

“There is no magic formula, only a long list of known ingredients: allow the free-market flow of goods, money, and people; encourage savings, and make sure banks are funneling the money into the productive investments; impose the rule of law and protect property rights; stabilize  the economy with low budget  and trade deficit; keep inflation in check; open doors to foreign capital, particularly when  the capital comes with technology  as part of the bargain; build better roads and schools; feed the children; and so on”(p x).

According to Sharma, starting from 2003, the harsh interest rate reduction of the US, which aimed to alleviate the effect of the tech bubble that burst in 2001, has been the common factor that has triggered the rapid development in developing countries through the high levels  of money flowing into these economies. Between the 1990s and 2007, the money flow to emerging markets increased from 2% to 6% of the emerging market GDP. The author further emphasizes that in addition to having a common development dynamic, each country has its own individual development dynamic as well.

China is Sharma’s first example for rapid development. One of the main drivers for its rapid development is that China’s export increased 20 % per year over the last decade and the investment share of GDP increased from 35% to 50%. However, Sharma is not optimistic about the persistence of this level of improvement for several reasons. First, China’s total debt has been increasing. According to the official numbers, their government debt is just 30% of GDP, yet this ratio does not include debt of companies, many of which are government owned. Therefore, the author recalculates the debt to GDP ratio of China as being 200% by including also the shadow banks, which are informally funding risky companies. A second reason for China’s future slowdown is its rising labor costs. As a result of the one-child policy of the communist party, the labor supply will significantly decrease in the next decade. Last, China has already increased its legal minimum wage for factory work at least by 18% each year since 2003, except for 2008, which was an economic crisis year. Therefore, cheap labor will no longer be a triggering factor of rapid development.

Sharma identifies India as the second breakout country of the last decade. After China, India is the second fastest growing economy with an average 9% increase in real GDP between 2003 and 2007. The main difference between China and India, however, occurs in the demographic structure. In comparison to the expected decrease of China’s labor supply, India has a growing population of youth to participate in the labor force. As a result, India has begun to identify its youth as a competitive advantage. On the other hand, the author highlights the increasing official transaction costs of initiating new enterprise in India, which discourages growth. As a result, investments by Indian entrepreneurs have diminished from 17% to 13% of GDP from 2008 to 2012.

The third country that Sharma concentrates on is Brazil, a top exporter of every commodity that has seen enormous price increases and as such, is one of the largest beneficiaries of the last decade’s rally. The potential risk in this situation is that once prices decline, as a result of a slow down in the world’s growth and a decline in the demand, balancing the reduction of prices will become more complex. Second, the value of Brazilian stocks and bonds has increased from five billion dollars to 50 billion dollars from early 2007 to March 2011. The value of Petrobras, a government owned oil company, reached 300 billion dollars in 2008, which is greater than 200 billion dollars: the total stock market value of Turkey at the same time. However, Sharma indicates that it is difficult to compare Brazil with China and India because of the different income per capita levels ($12,000 for Brazil, $5,000 for China, and $1,400 for India). Moreover, the productivity growth rate of Brazil was 0.2% per year in comparison to a 4% annual increase for China between 1980 and 2008, which indicates that China has invested to make workers and machines work more efficiently. In addition, the current total investment of China is approximately 50% of GDP, while only 19% for Brazil. Furthermore, Brazil also keeps trade barriers so naturally, trade is low: only a 20% of GDP. Due to these reasons, Sharma does not consider Brazil as a rising economy with its average 2.5% growth rate.

According to Sharma, like Brazil, Russia is one of the biggest beneficiaries of the last decade’s increases in the prices of oil and natural gas imports. As a big energy exporter, Russia shares this energy price risk with Brazil, so Sharma indicates that Russia should find an alternative income source to hedge this risk. With a 56% share of government in the economy, Russia is similar to China in this respect.

In an analysis of Turkey as a potential breakout nation, Sharma asserts that one of the main differences between China and Turkey is the saving ratio. The saving ratio of Turkey is 20% of GDP, which is low compared to China with a ratio of 50%. The author further argues that the money flow to Turkey is mainly short term and may cause an economic crisis in case of rapid cash out. To visualize the potential risk of its economy overheating, Sharma likens Turkey to a sport car that can be accelerated easily, thanks to its young population. He also underlines the increasing effect of the Middle East countries on both Turkish foreign trade and tourism. He says that 10 years ago only 7% of the Turkish exports went to Middle East, but now it is 20%. The number of tourists from the United Arab Emirates visiting Turkey between 2005 and 2010 has increased by 246%.

Sharma considers South Korea as the strongest developing country during the last decade.  Today, South Korean exports generate 53% of its GDP, and it has 30% of the global IT market. He also emphasizes that South Korean enterprises are among the major players in a variety of sectors and they are also open to foreign investment: More than one-third of the Korea’s stock market is owned by foreigners. South Korea, like Taiwan, is one of the only two countries that managed to reach growth above 5% per year for five decades. On the other hand, the author considers South Korea’s household debt ratio as one weakness, because it has one of the highest debt ratios of the world.

Apart from these countries the author also mentions some other countries, which are less likely to be breakout nations in the next decade. According to Sharma, the number of Mexican citizens who emigrated between 2006 and 2010 is 2.4 billion. He indicates that with an income level of $11,000 per capita, an average of a 3% economic growth rate, and diminishing oil production, Mexico is not among the potential breakout nations. After mentioning Taiwan, South Africa, Sri Lanka, and Vietnam, the author highlights that he does not consider Saudi Arabia as a potential breakout nation because although Saudi Arabia owns almost half of the world’s crude oil resources, it also has one of the largest gasoline deficits of the world, which means that it does not have enough refineries or other manufacturing activities.

I found the book very insightful. However, there is still room for improvement. In Breakout Nations, apart from just the economic data and social indicators that can be found anywhere else, Sharma clearly explains conditions in different countries through combining data with an analysis of the countries. This makes it easier for readers to visualize the countries and draws them into the atmosphere of the country that he writing about. He also transfers the knowledge in a way that enables even those without background knowledge in this field to easily understand how various factors lead to the divergent development outcomes of different countries. Undoubtedly, there are thousands of resources that can be used to obtain this type of information, however, a profound understanding of a country really occurs by visiting that country and inhaling its air. Therefore, “Breakout Nations” must be read by those who are interested in understanding the rapid development process in the last decade but who do not have financial means or time to visit all these countries.

After reading the book carefully, I have two possible suggestions on how to improve this book. My first one relates to Russia and India, and my second suggestion relates to Turkey.

Although, the author presents compelling arguments about the individual factors that define Russia and India’s development path, he does not address the brain drain issue away from these two countries.  Some of the best-educated and most promising citizens of these nations emigrate abroad, which hinders their rapid development. Therefore, while evaluating the development of these two countries, the increasing brain drain problem should not be omitted. The main causes of Russia’s brain drain include, the difficulty of starting a business, the lack of political freedoms, poor education, and better job opportunities elsewhere.[i] As for India, the main causes of the brain drain are the difficulty of finding a job, the unemployment rate, the lack of facilities for research, and better living standards abroad.[ii]

Another issue is Turkey. The author portrays Turkey’s atmosphere as successfully as a native Turk could, especially in terms of his vivid and accurate description of the economic success and political situation of the country in the last decade. On the other hand, the Turkey section of the book would have been richer if the author had analyzed the opposition party’s current situation when he was explaining the political success of the ruling party, which has been at the helm of the country for three consecutive terms. Finally, to effectively argue that Turkey is one of the potential breakout nations for the next decade, the analysis should have relied on more economic data analyses instead of mainly the analyses of the political situation.

Aside from these critiques, the book is highly successful in meeting its goals. Instead of just interpreting the data, the author professionally depicts the true atmosphere of the countries and gives a comprehensive understanding of their situations. 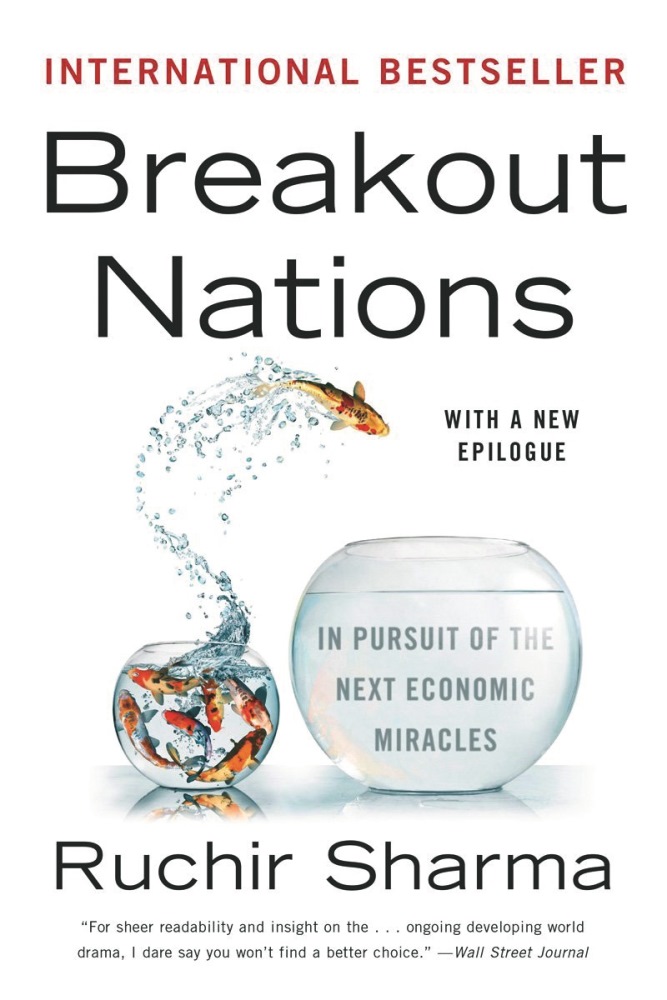