Daring and Caution in Turkish Strategic Culture: Republic at Sea

The book Daring and Caution in Turkish Strategic Culture: Republic at Sea is a valuable source of information on Turkish foreign and security policy both for students of international relations and scholars who are interested in this topic. It gives insight into the most important milestones and political figures in Turkish foreign and security policy, starting from the last decades of the Ottoman Empire until the very recent years of the Turkish Republic.

The book Daring and Caution in Turkish Strategic Culture: Republic at Sea is a valuable source of information on Turkish foreign and security policy both for students of international relations and scholars who are interested in this topic. It gives insight into the most important milestones and political figures in Turkish foreign and security policy, starting from the last decades of the Ottoman Empire until the very recent years of the Turkish Republic.

The author clearly highlights the basic dilemma between the republican and the imperial paradigms in strategic culture throughout Turkey’s history. The main aim of the book is summarized by the author as follows: “[s]ince Turkey is a prominent actor in three arenas that are likely to remain centers of great power interest—the Caucasus, Balkans and Middle East—insight into the determinants of its foreign policy is clearly desirable” (p. 1).

The first part of the book, entitled “Taking Root”, is devoted to the last decades of the Ottoman Empire and the first 50 years of the Turkish Republic. Here it is argued that the many of the key elements constituting Turkish strategic culture took shape in the years when the Ottoman Empire was collapsing. In this regard, the three notions that dominated the end years of the Ottoman Empire, namely “Ottomanism”, “Islamism” and “Turkism”, are analyzed here with references to important political events and figures of that time period.

The book then outlines the foreign policy dynamics at the time when the new republic was founded by Atatürk. At a time when the Zeitgeist was one of totalitarian regimes, Atatürk aimed to build a strong and developed republic in both technological and cultural terms. One of the most important foreign policy inventions of Atatürk was his slogan “Peace at Home, Peace in the World”, which would later become the motto of the Turkish Republic. In the following sections, the book analyzes the foreign and security policy-making processes and the so-called “cracks” in the history of the Turkish Republic starting from the end of World War Two until the late 1970s. To begin with, Mufti gives useful and interesting insights into how Turkish foreign policy has been shaped and how Turkey emerged from isolation and got involved in the Western bloc during the Cold War period, again with reference to crucial political events and actors in this time period. The republican strategic culture paradigm was put under pressure and challenged in these three decades due to three main turning points: the rise of the Russian threat by 1945; the Democrat Party’s victory in the national elections of 1950; and the easing of Cold War tensions with détente from the 1970s.

During the Cold War, the foreign policy of the Turkish Republic moved between activism—as was seen in the Democrat Party period, the Balkan Pact, the Baghdad Pact, involvement in NATO, the UN, the Korean War, the Cyprus issue, etc.—to periods of suspicion or caution towards the Western camp, as exemplified by the impact of the Inönü doctrine towards the Middle East, the coups in Turkey, and the rapprochement with the Soviet Union, especially in the 1970s.

Mufti has a special and detailed section on the Özal period, which is characterized as the Turkish Republic “Taking Sail”. Özal aimed for Turkey to be among one of the world’s 10 or 15 leading nations in 10 years’ time. Towards this end, he introduced various political and economic reforms and tried to capture a balance between the East and the West. His so-called counter-republican paradigm in strategic culture was characterized as something between “cautious insularity and daring venturesomeness” (p. 63). Mufti treats Iraq as a special case study, in which Özal’s active foreign policy in the Middle East was subject to many objections internally, both in civilian and military circles.

Finally Mufti covers the period starting from the 1990s until the end of 2008, which he labels “Floundering” since Turkey was struggling with many internal and external threats at that time. Turkey’s foreign policy activism and openings in different regions, such as the Middle East, Russia and Balkans, are studied at great length. Mufti (p. 87) argues that this period “witnessed an unprecedented upsurge in activism abroad”. Moreover, in this period, there was a counter-paradigm to the dominant strategic culture paradigm, mainly contending republican and imperial paradigms.

The last two decades of the Turkish Republic has witnessed the rise of Islamism, as in the case of Necmettin Erbakan, and business-oriented liberalism, as in the case of Mesut Yılmaz, both of whom served as prime ministers in the mid-1990s, that challenged the republican security paradigm. As a result, Turkey “continued to exhibit that strange combination of reluctant assertiveness” (p. 148) in its foreign and security policy until the end of the 1990s. A paradigm crisis in Turkish strategic culture was inevitable with the coming to power of the Justice and Development Party (AKP) in 2002, which tried to combine Islamic values with democracy. In doing so they relied heavily on a new vision reflecting neo-Ottoman perspective—although this neo-Ottomanist idea is questionable—as represented by the political scientist Ahmet Davutoğlu, who is currently serving as the foreign minister.

This book is recommended especially to those who are interested in learning about the most important events as well as actors in the Turkish foreign and security policy-making process in the last century, starting from the very last years of the Ottoman Empire, from a different and critical scholarly perspective based on a broad literature and sometimes first-hand information. It is very interesting to see how the domestic and foreign policy in Turkey have interacted in terms of foreign and security policy making and how Turkish foreign policy has sailed not only between daring and caution, but also between republican and imperial paradigms throughout the century.

However, it is necessary to have prior background information on Turkish foreign and security policy as well as on the central themes and figures of the history of Turkey to have a better understanding of this book. Even though this book has covered many aspects of Turkish foreign policy, it would also be useful if other important aspects, like Turkey’s opening up towards Africa after the 2000s or Turkey’s active participation in certain international organizations such as the UN, were also analyzed from a broader perspective. Sometimes it falls into the trap of too much emphasis on Turkish domestic politics at the expense of its foreign policy. 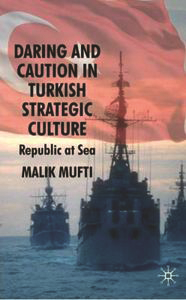