How Democracies Die: What History Reveals about Our Future

How Democracies Die is an explicit account of carefully arranged historical facts about the processes and observed failings of democratic institutions in selected countries of reference, including Chile, Argentina, Brazil, and Venezuela –an analytical narrative of the anti-democratic values and attitudes that the authors believe are responsible for the eventual liquidation of democratic governance systems in those countries. The impetus behind this very timely publication is the perceived threat that the authors feel, rightly or wrongly, that the Trump Presidency posed for American democracy –an expressed concern that is palpable throughout all the pages of the book.

How Democracies Die is an explicit account of carefully arranged historical facts about the processes and observed failings of democratic institutions in selected countries of reference, including Chile, Argentina, Brazil, and Venezuela –an analytical narrative of the anti-democratic values and attitudes that the authors believe are responsible for the eventual liquidation of democratic governance systems in those countries. The impetus behind this very timely publication is the perceived threat that the authors feel, rightly or wrongly, that the Trump Presidency posed for American democracy –an expressed concern that is palpable throughout all the pages of the book. The authors are of the tacit opinion that if America refuses to halt the denigration of democracy begun by former President Trump, the implosion of the American democratic governance system is imminent. Levistsky and Ziblatt open the discourse on the future of democracy in the U.S. with a rhetorical question as to whether American democracy is in grave danger; in their attempt to provide an answer, the authors examine the contemporary experiences of other democracies in order to establish whether democracy is under threat worldwide.

There are nine chapters in the book. In chapter 1, the authors utilize Aesop’s fable of “The Horse, the Stag and the Hunter” to abstract several instances of outsiders who were invited to power in Germany (Adolf Hitler), Brazil (Getilio Vargas), Peru (Alberto Fujimori), and Venezuela (Hugo Chavez)–all fateful alliances that turned sour in the end. However, in the case of the United States, the authors are of the belief that both the Democrats and the Republicans had–until 2016–succeeded in keeping extremists with public support away from the mainstream of party politics (pp. 11-32). Chapter 2, titled “Gatekeeping in America,” brings to fore the historical records of how extreme demagogues at different points in America’s political life have challenged its democratic system and how the built-in protective mechanisms of American democracy have shut them out of power on account of the manifestly anti-democratic values they espoused (pp. 33-52).

In Chapter 3, the authors illustrate the processes within the Republican party that aided the emergence of an ‘extremist outsider,’ Donald Trump, as the party’s presidential candidate, noting that the party gatekeepers had become ‘shells of what they once were,’ a development they explain as a consequence of the dramatic increase in the availability of outside money and the explosive rise of alternative media (pp. 53-71). Chapter 4 discusses the strategies deployed by “elected autocrats” to subvert democracy in such countries as Peru (under Alberto Fujimori), Venezuela (during Hugo Chavez), Argentina (when Juan Peron was in the saddle), Mussolini’s Italy, Mahathir’s Malaysia, Erdoğan’s Turkey and Putin’s Russia among others (pp. 72-96).

Chapter 5 examines the factors that have sustained American democracy against the emergence of anti-democratic leaders and avers that although the constitutional system of checks and balances had been largely successful in preventing leaders from concentrating and abusing power, constitutional and legal safeguards could still be manipulated by an anti-democratic leader (pp. 97-117). Chapter 6 analyzes several instances in which American democratic institutions were challenged and notes that the challenges were effectively contained because the ‘guardrails’ were upheld by society and by politicians from both parties who pushed back against violations that could have threatened democracy (pp. 118-144).

Chapter 7 reviews the historical origins of the increasing deployment of partisan warfare rhetoric in American politics, a trend the authors describe as a violation of the long-established traditions, customs, and unwritten rules of American bipartisan politics anchored on mutual toleration and forbearance (pp. 145-175). Chapter 8 presents a detailed account of President Trump’s norm-breaking actions, including abusive and acerbic verbal attacks on his opponents and the media, lying and bullying, and how such repetitive actions constitute a huge threat to American democracy (pp. 176-203). Chapter 9 situates the dangers posed to American democracy by President Trump’s unmannerly conduct within the context of the growing fears of a global democratic recession and predicts the possible futures of post-Trump American democracy, while emphasizing the importance of preventing American democracy from dying from within through a combination of strategies including, among others, ending extreme partisan division and polarization in American politics (pp. 204-231).

The major strength of this book is the authors’ scientific utilization of historical facts to develop a theory of how elected autocrats consolidate themselves in power through a combination of strategies they deploy to paralyze the democratic institutions that were instrumental in their emergence in the first instance. The book avers that elected authoritarians consolidate power by capturing the referees, sidelining the key players, and rewriting the rules of the game to tilt the playing field against opponents–strategies which they claim President Trump attempted to actualize.

The shortcoming of this book is that it is more an ideological, normative, and value-laden piece than an objective one. All through the book, the authors’ biases against Donald Trump and the Republican Party are palpably evident. There is a tinge of exaggeration and alarmism in the analyses of the norm-breaking actions of President Trump, which the authors blow out of proportion “as actions that could imperil democracy” (p. 203). The contradiction of such theorizing is evident in the admission by the same authors that President Trump’s ‘war of words against the media’ and other critics has not (yet) led to any action, as they affirm that “No journalists have been arrested, and no media outlets have altered their coverage due to pressure from the government” (pp. 182-183). This publication came out at the time it did in 2019, perhaps with the sole aim of providing strategic support to anti-Trump forces to ensure President Trump’s defeat at the 2020 Presidential polls (pp. 218-219).

Overall, this book provides empirically valid analyses of how elected authoritarians consolidate power in themselves by undermining and incapacitating the institutions that supported their emergence as power wielders using a combination of strategies, which this book unearths. The authors examine the historical manifestations of authoritarianism across some carefully selected countries and regions where democratic breakdowns had been experienced, and where democracy is receding, developing a theory on how democracies die on the basis of this analysis. How Democracies Die is a worthy historical account of the challenges of democratic governance in hostile climes that emphasizes the relevance of developing strategies for the sustenance of democracy against the global wave of democratic recession. 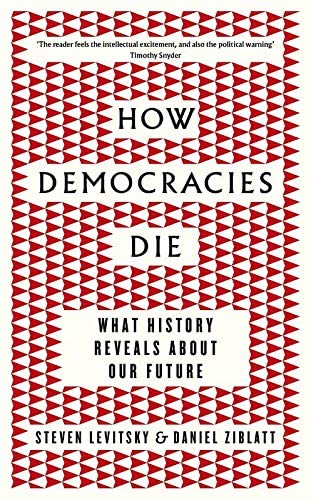