A researcher interested in Turkish foreign policy and domestic politics, I was very captivated with the book’s title as it entails an analysis of the way in which the EU reforms have impacted Turkey’s human rights record and development. However, this also raises questions, such as what were the sources of the democratization and human rights reforms?

A researcher interested in Turkish foreign policy and domestic politics, I was very captivated with the book’s title as it entails an analysis of the way in which the EU reforms have impacted Turkey’s human rights record and development. However, this also raises questions, such as what were the sources of the democratization and human rights reforms? Has the EU been the main force behind such transformation? Or, are there other domestic factors that we need to take into account as well? Such analysis enables us to draw significant conclusions on the development of the role of the police and other government control and protection tools in a human rights’ context and evaluate possible causes of such reforms.

According to Piran, this book was motivated by her interest in human rights issues and democratization reforms in states that are dominated by the militarily, i.e., Turkey. It should be noted that Turkey has undergone a huge transformation under the leadership of the Justice and Development Party (AK Party) and is no longer militarily dominated, at least compared to prior governments. However, her work is significant in understanding the development of human rights in Turkey as a state that previously dominated by the military. Piran investigates the domestic causes behind police reforms, particularly after the 1980 military coup. Moreover, her book focuses on the role of the Turkish National Police in counterterrorism and counterinsurgency operations against any domestic or external threats to the Republic. This mainly included counterterrorism campaigns against the Kurdish Workers Party (PKK).

This volume includes five main chapters; chapter one, “The Theoretical Terrain,” describes the institutional history of the Turkish National Police. It shows the way in which it steadily shifted from an unclear law enforcement body to a more independent law enforcement agency that was trained to fight terrorists and insurgency groups. In this chapter, Piran presents a theory that explains the reasons behind such a shift and examines other theories from Europeanization, police reform and democratization literature. This section of the book is of great importance due to its theoretical nature and analysis of additional literature. Although it must have been difficult for Piran to cover three different literatures and bring them together in a limited space, she was able to present an interesting theoretical account for readers to ponder before exploring her findings.

Chapter two – “Overview of the Turkish National Police: Historical Continuities and Change” – looked at the bureaucratic nature and structure of the National Police and the way in which policemen are viewed in society. Generally, Piran presents a clear picture of the development of the National Police’s role since the 1970s, including Turgut Ozal’s reforms to professionalize the agency. Although this chapter was dominated by a historical description of the institution’s development, it is necessary to explain its historical development to expand our understanding of the case in hand.

Chapter three – “Research and Findings” – combine the author’s own research and fieldwork. It begins with a general view of the National Police’s position and role using questionnaires that contained open-ended questions from 2007. The second part focuses on analyzing the participants’ responses and the author’s findings. Piran also supported her findings through casual interviews carried out between 2007 and 2008, taking into account different internal and external factors. The author utilizes a comparative approach to study Turkey’s progress against two different countries: Bulgaria and Romania. She states, “in comparison to Bulgaria and Romania, Turkey has shown the greatest level of commitment to fulfilling the EU’s democratic criteria” (p.93). This is one of the main contributions of this book as it acknowledges that the two countries that recently joined the EU were actually less committed to fulfilling the EU’s democratic criteria compared to Turkey, a country that is still seeking membership. However, the most important point to raise here is that the author argues that the EU was not the main force behind the transformation of Turkey’s National Police, human rights and democratization since the 1970s; rather, it gained its position of influence after 1999.

Chapter four, entitled “Institutional, Legal, and Policy Changes,” examines how the Turkish government’s reforms from Turgut Ozal through the ruling AK Party have been carried out to meet the people’s wish for a democratic transformation and, later, to please the EU. This chapter looks specifically at the growing power of the National Police and the development of new policing practices, including the creation of the Office of Special Operations. Piran stated, “I addressed the dismal and undemocratic state of the Turkish judiciary that has contributed to the EU’s concerns as expressed in the Commission’s 2012 Annual Report” (p. 124).

Chapter Five is the concluding chapter that reflects on the study’s findings, as well as Piran’s expectations on future reforms and Turkey’s relations with the EU. She also emphasizes the importance of such a study for Turkey and its benefits for future policies and reforms. Piran analysis focuses mainly on security and identity perceptions in both Turkey and the EU, which is important as identity and security influence Turkey’s potential to become an EU member.

Dr. Piran was able to gather a variety of evidence through her fieldwork and presents a captivating account on the democratic and police reforms in Turkey, including an analysis of both international and domestic factors. It can be argued that this book is successful in offering a general introduction to Turkish institutional reform with a particular focus on the police and law enforcement. However, this volume could have been benefitted from the utilization of a process tracing methodology. Process tracing is very useful in cases where there are a number of different explanations to what motivated police and democratization reforms because it allows us to test and evaluate the significance of the various accounts offered in the literature. This method of analysis allows the researcher to filter previous theoretical explanations (variables), including the researcher’s own theory, and arrive at a necessary and sufficient answer.

This book is of great value to scholars and researchers who study Turkish domestic politics. Furthermore, it is interesting for students and observers who seek to understand both Turkish-EU relations and the democratization process in Turkey. Personally, Piran’s work has enhanced my knowledge in two main areas: 1) EU-Turkish relations and the EU’s impact on the Turkish democratization process; and 2) the role of the Turkish National Police and development of human rights issues. Overall, Piran’s book is well structured and very enlightening. I advise academics from different universities to recommend this book to politics and International Relations students who are interested in understanding the connections between security and democracy in Turkish politics. 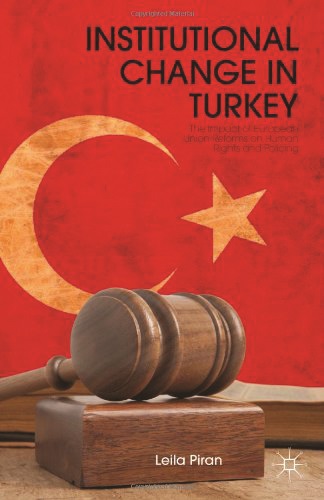