We live in a world where developments in one state impact the others. Human rights violations taking place in or by a state affect other states as well. The issue of human rights law has long been a matter of debate, and scholars have sought to validate their stand using moral or legal perspectives. Human rights and violations thereof is an ongoing issue of relevance, one which attracts a large audience at major international political and economic forums.

We live in a world where developments in one state impact the others. Human rights violations taking place in or by a state affect other states as well. The issue of human rights law has long been a matter of debate, and scholars have sought to validate their stand using moral or legal perspectives. Human rights and violations thereof is an ongoing issue of relevance, one which attracts a large audience at major international political and economic forums. The mid-twentieth century covenants on human rights continue to provide the basic framework for pursuing and protecting the rights of people around the world. The rationale for pursuing the idea of ‘international’ human rights law rests on the premise that states are not able to protect human rights on their own; therefore they need an overarching forum.

Professor Gibney’s book presents a case for adhering to the ‘legal obligations’ that we ‘already possess’ (p. 9) as a corollary to being party to the covenants on human rights. The central point of the book is to seek a return to universal principles of international human rights law. The book is divided, very aptly, in four main chapters or steps, as the author labels it, to make that return. Gibney introduces the problems with the present international human rights regime and identifies the possibilities of arriving at the promised principles with minor adjustments. The two ‘mistakes’ that the author identifies with regards to human rights are the primacy accorded to citizenship as the basis of protection, and the extent of human rights obligations (p. 11).

In the first chapter, “Step One: Responsibility,” Gibney focuses on what constitutes an international wrong. The chapter begins by presenting the dismal state of affairs caused by the use of different standards for assigning responsibility to different states. With convincing empirical evidences, he shows that responsibility has been seen in terms of ‘control,’ which is faulty. He suggests looking at the effect of a state’s actions on human rights protection instead. The chapter argues for considering the aspect of ‘aiding and assisting’ as a wrong alongside the carrying out of a wrong (p. 58).

The second chapter, “Step Two: Territory,” focusses on the site of an international wrong. Cases pertaining to the high seas, outside Europe, and those relating to the ‘war on terror’ are presented as empirical evidence to show how the Western states see a dichotomy between their obligations at home and outside their boundaries (p. 87). For instance, the torturous interrogation of terrorists at Guantanamo Bay during the Bush regime was not seen as that problematic because it was not taking place in U.S. territory. Even though people are aware of the actual happenings, states have used claims about territory to escape responsibility for human rights violations (p. 89).

“Step Three: Accountability,” the third chapter, argues that in the case of a failure to meet the obligations assigned under international law, states ‘should be held accountable’ (p. 92). The chapter provides an exhaustive list of existing international covenants and conventions and extends the obligations of states beyond their territory as ‘extraterritorial obligations’ (p. 118). While states agree that human rights protection requires international assistance and cooperation, they face problems in acting together. Also, states tend to see only the acts of others as constitutive of human right violations. The author urges them to change this tendency.

The last chapter and final step, “Step Four: Remedy,” looks at the issue of the enforcement of rights. This final step seeks to create such ‘means by which individuals can enforce their own human rights’ (p. 147). Gibney proposes the creation of a permanent International Civil Court or World Court of Human Rights where individuals can bring action against states for violations of rights. The author, however, modestly concedes that the two options would be difficult to create in light of state resistance to such ideals. Thus, a more feasible solution is also provided: employing the domestic courts of other states for justice. Cases of sovereign immunity, however, fall beyond this purview.

The book concludes with an analysis of three books that ‘question the viability of human rights:’ The Last Utopia: Human Rights in History, The Endtimes of Human Rights and The Twilight of Human Rights Laws (pp. 151-154). While Gibney agrees with the dismal state of affairs they depict and shares their disappointment, he argues that whatever has been done to date in the name of human rights is not what ‘human rights’ means in reality. He challenges the interpretation of international human rights by the states and the way they have made it into an ineffective enterprise.

The book makes some serious interventions in the present discourse on human rights without asking for major changes to the existing regime. The argument that keeps surfacing throughout the book turns on the questions of what constitutes an international wrong, and how international human rights are viewed and ought to be viewed. In this regard, the structure of the book does justice to the argument. Using several examples of empirical evidence to support his claims, the author pursues his stance with conviction. The proposals towards the effective enforcement of human rights that the book presents are worth engaging. As for the promised ‘effective remedy,’ the proposal that a third party court could serve as an arbiter is also a plausible possibility.

Gibney brings in alternative terminologies that are more appropriate in his view than the ones currently in use, and they do make an impact. For instance, his insistence on using the term ‘state (non)responsibility’ or ‘ir(responsibility)’ (p. 38) instead of state responsibility seeks to convey the urgency of changing the way in which the issue is understood. The author presents a reconceptualization of international human rights law by locating problems and suggesting solutions in terms of responsibility, territoriality, obligations and enforcement of the law, all of which are normatively grounded

The books presents different aspects relating to international human rights in a very understandable manner, and the use of examples from the real world make the book an easy read. The division of chapters provide lucidity to otherwise intense arguments. This book is indispensable for scholars working on any aspect of human rights. International Human Rights Law serves a dual purpose: as a primer, it introduces the debates around international human rights laws, and as a policy guidebook it presents solutions towards the improved applicability and realizability of existing principles. 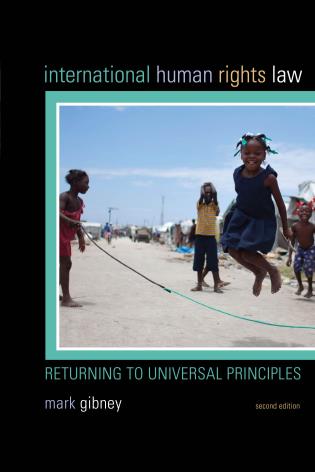