Pedro Amakasu Raposo’s Japan’s Foreign Aid to Africa was published exactly at the right time when this subject is receiving remarkable attention not only from inside but also outside Japan. On January 2014, Japanese Prime Minister Shinzo Abe visited Ethiopia, Côte d’Ivoire and Mozambique with the Japanese private companies’ delegation. This visit marked the new era of Japan’s foreign policy towards Africa, as discussed later in this review.

Pedro Amakasu Raposo’s Japan’s Foreign Aid to Africa was published exactly at the right time when this subject is receiving remarkable attention not only from inside but also outside Japan. On January 2014, Japanese Prime Minister Shinzo Abe visited Ethiopia, Côte d’Ivoire and Mozambique with the Japanese private companies’ delegation. This visit marked the new era of Japan’s foreign policy towards Africa, as discussed later in this review.While the Raposo’s book subtitle is “Angola and Mozambique within the TICAD Process,” it provides the readers with a comprehensive commentary and analysis of Japan’s foreign aid policy to Africa during and after the Cold War. The book is divided into four parts with seven chapters. Part 1, Chapter 1 introduces why this book focused on TICAD (Tokyo International Conference on African Development), which has been held every 5 years since 1993. In essence, after the Cold War, the Japanese government shifted its foreign aid policy to Africa from reactive to pro-active, which is observable through the TICAD Process. One of the significant contributions of this book is that by combining the TICAD process and the aid policy to Africa it “establishes the research framework to examine multiple rationales behind Japan’s bilateral aid decisions.”

In Part 2 “Approach to Africa and IR Theories,” based on scholarly literature, the author reviews analytical approaches (commercial and strategic-political approaches, etc.) (Chapter 2) and the theoretical perspectives within an International Relations framework (realism, liberalism, constructivism, etc.) (Chapter 3) to understand the purposes of Japan’s foreign aid to Africa. It is argued that during the Cold War it was easy to identify an approach or framework best explaining Japan’s aid rationale to Africa, however after the Cold War it became more difficult to do so. This is because TICAD introduced the concept of human security and consolidation of peace in Japan’s African policy. As a result, Japan’s policy after the Cold War is a combination of different approaches and perspectives.

Part3 “The TICAD Process” is composed of Chapter 4 and Chapter 5. Chapter 4 traces the history of Japan’s foreign aid to Africa and examines the political implications of the TICAD process. The author argues that although the external events, such as international pressures, had some influences on Japan’s decision to organize TICAD, the main factor of its decision was Japan’s national interests. Japan’s foreign policy seeks to raise its international status and show its altruism through Africa’s development. The main argument of Chapter 5 is that TICAD became the core of MOFA’s African diplomacy, first to achieve Japanese national interests, and second to reduce the degree of conflict between bureaucratic actors.

Finally, Part 4 “Japanese Aid to Africa: Case Studies,” shifting from the broad analysis of the previous chapters, focuses on specific country analysis as case studies. Chapter 6 shows the changing patterns of Japan’s foreign aid to Africa after the TICAD process in terms of the quantitative and qualitative. Japan’s foreign aid had been historically concentrated in low-income countries with economic or political importance, such as Ghana, Kenya, Tanzania, and Zambia and its patterns was similar to its aid to Asia focusing on economic infrastructure development. However, in the post-Cold War, Japan started to provide aid to fragile countries, such as the Sudan or Sierra Leone, which reflected Japan’s commitment to the consolidation of peace. Chapter 7 reviews the history and new trends of Japan’s aid to Mozambique and Angola. It argues that Japan’s new approach has strengthened peace building and human security grassroots projects, which were created in lign with NGOs and social infrastructure development. It concludes that the increase of Japan’s ‘soft-power’ is the product of “the international and regional acceptance of the TICAD’s new methods of approaching development.”

This book successfully captures and analyzes the changing nature of Japan’s foreign aid to Africa during and after the Cold War. It pays close attention to the TICAD Process as well as case studies, such as Angola and Mozambique. However, in the context of the more recent development of Japan’s foreign aid policy, there are several other issues that coud have been included in the book. First, with Japan’s recent policy of suspending its nuclear power plants, there is a heightened demand for fossil fuel in Japan. Thus, Sub Saharan Africa, as an emerging market and a natural resource supplier, has gained greater weight in Japan’s industry. This new focus explains, in part, the Japanese Prime Minister’s visit to some African countries in early 2014. In this context, the Japanese government is trying to prioritize the most important African countries in its allocation of foreign aid, including “loans made in Yens.” Thus, the commercial approach as well as strategic-political approach to some extent, again, occupies the central place of Japan’s aid policy to Africa. Second, the growing influence of emerging donors (which can be defined as non OECD-DAC members) and the implications it has on traditional donor’s policy should not be dismissed. Although Raposo’s work does not directly mention emerging donors, these donors, especially China, are quickly joining the ranks of the most influential donors in Africa. It is obvious that Japanese policy makers regard China as a major competitor in Africa. Consequenlty, Japan is developing its strategy in relation to the growing Chinese presence in Africa. Finally, in 2014 the discussion on the ODA charter revision is a work in progress. It appears that one of the main changes of the charter would be to make it possible, for the first time, to provide aid to foreign military forces, however, the nature of the aid would not be “military.” Although this is a controversial change, this new policy direction is in line with Japan’s peace efforts in Africa. Nevertheless, these new directions of Japan’s foreign aid policy do not undermine the value of Raposo’s ideas. This book is recommended for all scholars and students of African development studies and Japan’s foreign policy studies, and those who are involved in foreign aid policy and practice in Africa. 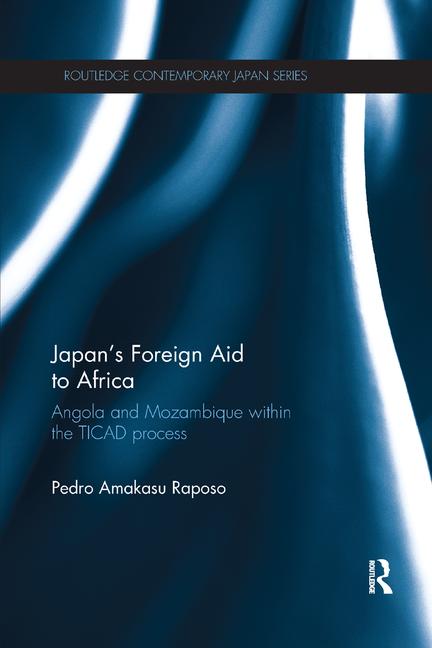