Mobilizing Religion in Middle East Politics: A Comparative Study of Israel and Turkey

In his book Mobilizing Religion in Middle East Politics, Yusuf Sarfati provides one of the few book-length, up to date, comparative studies between modern Turkey and Israel. Unlike what the title suggests, it might be misleading to assume such a comparison would be about Middle East politics in general. Nonetheless, Sarfati’s in-depth study of these two non-Arab countries, both held as “exceptional” or “outliers” in their region, offers findings extending beyond its cases and the region.

In his book Mobilizing Religion in Middle East Politics, Yusuf Sarfati provides one of the few book-length, up to date, comparative studies between modern Turkey and Israel. Unlike what the title suggests, it might be misleading to assume such a comparison would be about Middle East politics in general. Nonetheless, Sarfati’s in-depth study of these two non-Arab countries, both held as “exceptional” or “outliers” in their region, offers findings extending beyond its cases and the region.

The book has a clear focus: What are the dynamics and mechanisms behind the electoral success of religious political parties in democratic settings? Sarfati defines a religious party flexibly as “a political party that takes religion as a reference point for its policy proposals to address the major political problems of its country” (p. 10). He, then, scrutinizes the political rise and mobilizing power of two religious movement parties, the National Outlook Parties in Turkey and Shas in Israel, especially since the 1990s.

Initially, Sarfati draws a big picture from the literature of the rise of these new religious movements, which he categorizes into three main approaches: cultural, socioeconomic, and political (p. 14). While most of the contemporary literature accommodates the well-known “inclusion-moderation thesis,” Sarfati differs from this mainstream and skillfully employs Social Movement Theory (SMT). This choice of theoretical framework greatly adds to the novelty of his book and reflects more on the process of moderation. As both Shas and National Outlook Parties rely on religious movements as their bedrock, SMT could point out different aspects left in the dark. To further elaborate on the sophisticated phenomenon in focus, Sarfati takes rather an eclectic and contingent approach and argues that “the interaction between political opportunity structures, framing processes and social networks explains the successful religio-political mobilization in Israel and Turkey over the past two decades” (p. 4).

Mobilizing Religion in Middle East Politics presents a parallel historical course in which both movement parties are contextualized and examined accordingly. The National Outlook Parties, established in 1970, and Shas, established in 1983, exploited the social cleavages inherited from the formative years of these two countries and addressed the peripheral groups deprived of the benefits of the reigning political system: the rural immigrants in Turkey and the Sephardim in Israel. The inclusion of National Outlook and Shas in coalition governments created a political opportunity structure and granted them crucial state resources. Shas, for instance, holding the Interior and Religious Affairs ministries, managed to form expansive patronage networks and channel state funds to its affiliated organizations (p. 76). Similarly, from Necmettin Erbakan’s National Salvation Party in 1970s to Turgut Özal’s Motherland Party (1983-1991), which incorporated many former National Outlook members, several ministries had been associated to this movement, which in turn nurtured the affiliated civil organizations and extended its base (p. 104). This continued more boldly when Erbakan’s Welfare Party came to power in 1995. While the economic liberalization in both countries frustrated several segments of the society, these religious-political actors also used this development as a political opportunity by providing welfare and subside to the urban poor and appealing for their votes in return. Ironically, it appears that while the state incorporated these two movement parties, in turn, they incorporated the state.

Sarfati also examines how these religious-political actors succeeded in mobilizing the masses and underlines the significance of ‘framing processes.’ He identifies three main frames employed by Shas and the National Outlook in the 1990s: a) ‘injustice frames,’ using a victim discourse, b) ‘empowerment frames,’ underlining the potential to overcome that victim status, and c) ‘prognostic frames,’ offering solutions to the present problems (p. 20). In this regard, the Welfare Party’s definition of the Turkish regime as an “order of exploitation” appealed to all those suffering from socio-economic marginalization, whereas Shas’s motto “returning the crown to its past glory” attempts to restore dignity to the Sephardim (p. 212). A call for justice and dignity with religious justifications seems to have worked in both milieus and turned these two actors into substantial grassroots movements. Moreover, that framing also enabled these movements to transfer pride to their followers and to re-synergize their respective potentials.

This brings us to the third determinant in Sarfati’s analysis: the organizational structure and well-established social network. The Welfare Party had a rather strong and centralized party organization with its highly motivated networks assigned even at neighborhood level, while Shas benefited from ultra-Orthodox Sephardi rabbis and yeshiva students to channel mobilization. In both cases, the religious-political actors were able to get their message across to society and penetrate its different segments via their well-developed social networks. Sarfati adds a chapter on religious schooling, to demonstrate how Imam-Hatip schools in Turkey and Ma’ayan schools in Israel became instruments of mobilization and recruitment for the National Outlook and Shas parties, respectively (p. 182).

Sarfati’s take on Turkish and Israeli religious movements possesses considerable explanatory value especially for the period of the1990s. Nevertheless, for the 2000s in Turkey, this framework might not suffice to explain the rise of the Justice and Development Party, an offshoot of the National Outlook, turned into a mass party rather than an a movement party. This makes the comparison on equal grounds more difficult. Nevertheless, Mobilizing Religion in Middle East Politics deserves special attention as an alternative reading to the moderation of religious political parties in Middle East. It will appeal to students, area specialists, and anyone interested in political parties and religious movements. 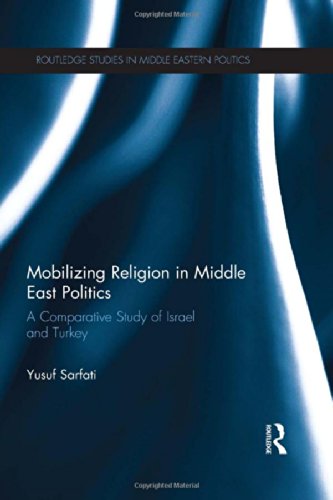