The book provides a wealth of necessary theoretical and historical background for understanding the security strategies of Turkish foreign policy. Yükselen grounds its discussion on the question of how the discursive aspects of Turkey’s strategy were shaped between 1919 and 2015.

Strategy has been a much-debated concept in the International Relations discipline. In his book, Hasan Yükselen, chooses not to simplify strategy as a prolongation of states’ military objectives. Instead, he comes up with theoretical evidence from Turkish foreign policy to show that strategy does not operate in a vacuum and that it evolves historically and sociologically. According to the author, in this process, the agent, who/which may be a leader or a group, depending on the state, pours its thought into action but beyond that, the agent represents strategy through discourse. Yükselen puts forward the questions: how do discourses represent strategy? How did the discursive aspects of different strategies in Turkish foreign policy shift between 1919 and 2015? By taking the shifts in Turkish foreign policy into account, Yükselen lucidly demonstrates the relationship between different strategies and discourses in Turkey.

After introducing the concept of strategy in the first two chapters, the author scrutinizes revisionism as a leading strategy of Turkey in 1919-1923, in chapter three. Yükselen begins this chapter by arguing that the strategic end was the transformation of the Ottoman Empire into a Turkish nation-state, whereas the means were force and diplomacy between 1919-1923. According to the author, the empire was compelled to employ a balance-of-power strategy as a survival tactic, yet structural factors such as its relative weakness and the rise of nationalism governed this period. These structural factors accelerated the dismantling of the empire. He illustrates that both late-Ottoman leaders and Mustafa Kemal Atatürk benefitted from a balance-of-power strategy to overcome relative weakness, but that Atatürk embraced this strategy to allocate means and ensure the end –independence–rather than to prolong the ongoing conflict. Hence, Yükselen’s vigilance in distinguishing between different balance-of-power strategies should be praised.

The author examines the challenging days of the new Republic in chapter four. The leitmotifs in this chapter are ‘reconstruction’ and ‘isolationism,’ which were the ways of ensuring the development of the country through diplomacy. The author’s articulation is remarkable since he argues that Turkey’s relative weakness continued to endure, but the decline of the European establishment relieved it in this period. Namely, following the emergence of internal crises in Europe, Turkey ended up possessing ‘relative autonomy.’

Although Turkey’s isolationism emanated from fear from the West, 1929 is a critical juncture, when rapprochement with the West replaced this fear. This fear, which is deeply rooted in Ottoman-Turkish history, simply refers to the perception of being surrounded by enemies, mostly Western, attempting to weaken and/or destroy the Turkish state. Nevertheless, in light of Turkey’s decades-old Westernization experiences, Yükselen’s strict emphasis on it is questionable. ‘Fear from the West,’ which later evolved into ‘Sevresphobia,’ was not the primary concern of Turkish foreign policymakers. That is why they opted to cooperate with the West in order to prevent spillover effects from the instabilities in Europe in the 1930s.

“Turkey cannot assure its security through forging alliances” is the discourse of its strategy between 1939-1945. Chapter five, considering this era, revisits the increasing threat against Turkey’s territorial integrity during WWII. According to Yükselen, Turkey’s previously adopted policy of staying away from the frictions in the West had to change. Thus, Turkish policymakers opted for a cautious normalization between the warring parties. Non-belligerency was the formula to actualize the strategic end of avoiding destruction. Yükselen refers to the argument of Selim Deringil. Recalling Deringil’s conception of “active neutrality,”1 Yükselen asserts that “commitments leaving no room for maneuver were refrained to allow more flexibility” (p. 125).

Chapter six provides a persuasive explanation of how undertaking commitments can be detrimental to the interests of a middle power, such as Turkey, involved in post-war dynamics. In consideration of the bipolarity of the era, Yükselen argues that the threat of a resurgent Soviet Russia challenged Turkey’s prior strategic ends, with the result that ‘assertive integration’ replaced Turkey’s strategy of balancing power. Under its new policy, Turkey promptly took steps to undertake commitments to be embedded in the Western alliance. Here Yükselen’s reference to Huseyin Bağcı’s remarks2 is significant, since Bağcı lucidly elaborates on prime minister Adnan Menderes’ choice to reject the strategy of neutrality when Menderes “showed no elasticity in that consideration” (p. 149). Nevertheless, Yükselen finally demonstrates that Turkey had a reasonable rationale for initiating its estrangement from the West because U.S. President Johnson’s patronizing style toward Turkey in the infamous ‘Johnson Letter’ pushed Turkey to re-evaluate its accommodation with the West. This articulation, prima facie, offers a convincing explanation. However, Yükselen should have elaborated on the reasons behind Menderes’ choice of abandoning neutrality.

In chapter seven, Yükselen argues that Turkey once again gave up balancing with the great powers when Turgut Özal assumed the prime ministry. He argues that Özal staunchly intended to rebuild closer relations with the United States. One of the most striking differences between the strategy of the Özal leadership and that of prior administrations was Özal’s strategic end of creating a Turkish sphere of influence in Turkey’s neighboring regions. Although Özal’s active foreign policy was based on preventing any possible spillover of instabilities into Turkey, Yükselen should have explored whether there is a tie between Özal’s relatively tolerant stance regarding the assertive American military-political presence in the Middle East and Özal’s foreign policy priority to consolidate Turkey’s influence in post-Soviet Central Asia.

Finally, the eighth chapter covers the discursive aspects of the Justice and Development Party (Adalet ve Kalkınma Partisi, AK Party). According to Yükselen, reminiscent of Özal’s regional mobilization, the strategic aim of the AK Party was the reassertion of Turkey’s regional/global power. However, the author is insistent on the continuity between the AK Party’s ‘zero problems with neighbors’ policy and Atatürk’s ‘peace at home, peace in the world’ discourse. The author’s insistence on this continuity, in fact, is a convincing and an eloquent expression laying emphasis on the durability of Turkey’s relative weakness as a structural factor over years. Despite Turkey’s perennial constraints, Yükselen can demonstrate that a kind of pragmatism and activism can be perceived under a relatively pacified foreign policy, as in the case of the Arab Spring, in which Turkey assumed a significant role.

Hasan Yükselen’s Strategy and Strategic Discourse in Turkish Foreign Policy is a well-rounded source of analysis. The book provides a wealth of necessary theoretical and historical background for understanding the security strategies of Turkish foreign policy. Yükselen grounds its discussion on the question of how the discursive aspects of Turkey’s strategy were shaped between 1919 and 2015. Although it disregards some minor factors and connections among several political developments, Yükselen’s analysis should be praised for its well-rounded analysis, especially for academics and students researching Turkish foreign policy. 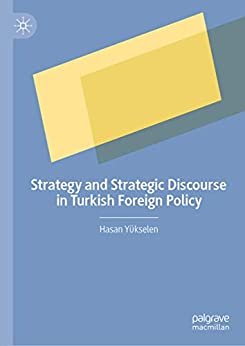