The Almohads: The Rise of an Islamic Empire

As a dynasty based in medieval North Africa and southern Spain, the Almohads have received relatively little attention from Anglophone scholars in Islamic Studies, many of whom work from a Middle Eastern perspective. Allen Fromherz’s book is thus a very welcome contribution to the field. His over-arching aim is to present an account of the rise of the Almohads by looking at the Almohad movement’s leader, Muḥammad b. Tūmart; the Maṣmūda Berber tribal environment in which the empire arose; and the doctrines by which Ibn Tūmart galvanised these tribes from the High Atlas mountains of Morocco.

As a dynasty based in medieval North Africa and southern Spain, the Almohads have received relatively little attention from Anglophone scholars in Islamic Studies, many of whom work from a Middle Eastern perspective. Allen Fromherz’s book is thus a very welcome contribution to the field. His over-arching aim is to present an account of the rise of the Almohads by looking at the Almohad movement’s leader, Muḥammad b. Tūmart; the Maṣmūda Berber tribal environment in which the empire arose; and the doctrines by which Ibn Tūmart galvanised these tribes from the High Atlas mountains of Morocco.

He introduces the Almohads in a lively and engaging way, using primary sources as the basis for the arguments presented in each chapter. He begins with a brief summary of the Almohad empire’s history and then he wisely discusses the sources and their pitfalls, especially their mythic and legendary aspects (although inevitably he must also rely on them for his facts). He also flags up what he considers the neglected ‘Berber’ dimension within accounts of the rise of the empire.

Chapter one then explores Ibn Tūmart’s life and the early years of the Almohad movement with an insightful look at tribal society in the High Atlas and the implications of Ibn Tūmart’s genealogy. Using the biography/hagiography written by his follower, al-Baydhaq, alongside other sources, the chapter then traces Ibn Tūmart’s intellectual formation in the Islamic east and the main events which occurred on his lengthy journey back to Marrakesh. Fromherz deftly analyses Ibn Tūmart’s meeting with ‘Abd al-Mu’min, the future caliph of the Almohad empire, and his encounter with, ‘Alī b. Yūsuf, the ruler whose empire he sought to overthrow.

The second chapter focuses on the Berber tribal contribution to the Almohad movement and points out that while Ibn Tūmart’s message of Islamic reform rejected aspects of the tribal past, it also assimilated, used and modified many of them. Fromherz gives a particularly useful analysis of the roles of the āsmās, a communal meal to confirm alliances, and the tamyīz, a review of the tribes which the Almohads used as a tool to purge and kill disloyal elements as well as an occasion to recognise devotion to the cause. The tribes participating in the movement are then described in turn giving a thorough overview of who actually participated in the movement. The chapter ends with a summary of the Almohad hierarchy of power which emerged from this environment.

In chapter three, Fromherz looks at the doctrines put forward by Ibn Tūmart and his claim to be the mahdī. In keeping with other scholars, especially Maribel Fierro, he shows how the Almohad sources depict Ibn Tūmart’s life as an imitation of the life of Muḥammad and the central importance of his claim to be the mahdī. This claim enabled him to demand complete obedience to his message by virtue of his status. The reformed Islam which he promulgated is partially described in his book, the Aʿazz mā Yuṭlab (The greatest of what is sought), the subject of the rest of the chapter. Despite much scholarly disagreement as to whether all the book’s contents were actually authored by Ibn Tūmart, Fromherz believes they were and gives a good explanation for their form and function in the Almohad movement.

Chapter four which looks at the rise of the Almohads in a broader context is brief and seems something of an afterthought. The analysis of what constitutes a tribe could have been omitted or integrated into chapter two. In fact, the main drawback to the book is the sometimes awkward placing of materials and repetition of similar points. The first chapter finishes with sections on gender and ethnic labels which interrupt the narrative flow. The description of tribal economy similarly disrupts the flow at the end of the second chapter. It is not that these asides are irrelevant but they do not seem sufficiently integrated into the book as a whole. This sometimes gives the work the feel of an. On the other hand, the large number of sections and sub-headings does make it easy to navigate and potentially helpful as a reference.

One underlying question that the book raises is the particularity of the Maṣmūda Berber as opposed to tribal component to the rise of the Almohads. Ibn Khaldūn, whom Fromherz cites as instrumental in creating the Berber myth of the empire’s origin, did not consider the Berbers unique but claimed that the blend of ʿaṣabiyya and religious inspiration that they demonstrated was equally apparent in the Arabs and indeed other tribal peoples. While it is true that the Maṣmūda supported Ibn Tūmart because he was one of their own, there is more research to be done on the specific colour which their origin contributed to the movement.

Despite its merits, this book presents some minor irritations to the specialist. The Arabic transliteration is frequently incorrect, or idiosyncratic. For example, furūʿ is rendered furuʿ throughout; bū Yaʿqūb Yūsuf is used instead of the standard Abū Yaʿqūb Yūsuf (p. 164) and Abū Shiyyba instead of Abū Shayba. Fromherz also translates kafīr (sic) and jāhiliyya as ‘the unbelievers and the ignorant’ when the unbelievers are kuffār and jāhiliyya is more rightly the time of ignorance not ignorant people (juhhāl or juhalā’). (p. 162) This seems strange when his careful analysis of primary sources including the complex Aʿazz mā Yuṭlab demonstrates his scholarly competence.

In addition, the copious notes function almost as an academic commentary on the main text but they are situated somewhat inaccessibly at the end rather than at the foot of each page. This seems to reflect a tension in the book between striving for simplicity and appeal to a general audience and recognition as an academic monograph. Ultimately it is very difficult for any book to be both and Fromherz’s work oscillates between the two imperatives. It is nevertheless a good accessible introduction to the history of the Almohads, and for the most part an enjoyable read which also presents the key issues, doctrinal, political and social, relating to the rise of this fascinating empire. 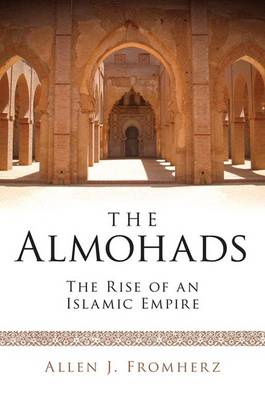 Publisher
I. B. Tauris