The Arab world has been making a new history since January 2011 when the uprisings against President Ben Ali resulted in his fleeing from Tunisia. Throughout 2011, the decades-old rule of Hosni Mubarak in Egypt and Moammar Qaddafi in Libya ended.

The Arab world has been making a new history since January 2011 when the uprisings against President Ben Ali resulted in his fleeing from Tunisia. Throughout 2011, the decades-old rule of Hosni Mubarak in Egypt and Moammar Qaddafi in Libya ended. Political change came to Yemen and the status quo has been strongly challenged in other Arab countries. Jean-Pierre Filiu, in his The Arab Revolution: Ten Lessons from the Democratic Uprising, takes stock of the revolutionary movements in the Arab world, briefly summarizes the events in key countries and comes up with ten lessons that we can learn from the uprisings.
The book, which comprises ten brief chapters, gives a concise history of what happened in the Arab world since the protests first started in Tunisia in December 2010. The book is organized around the lessons that can be learned from the revolutions. In the first two chapters, Filiu argues that the uprisings have challenged the widely held beliefs about Arabs and Muslims in the West. First, the recent events have shown that Arabs are not an exception, and like others they also seek liberty and freedom. As he writes, “Arabs are no exception, but the resilience of their ruling cliques has been exceptional” (p. 16). Second, the recent events have challenged the view that Muslims are associated with authoritarianism and violence but not freedom and peace. In the next three chapters, Filiu makes conclusions about social movements and mobilization. In chapter three, he shows how youths, with their resentment for the regimes, can be influential in revolutions. As opposed to those theories of mobilization that reference the necessity of material resources for social action, the Arab youth have showed that their anger was their power. In the following chapters, he demonstrates how social networks without charismatic leaders worked in the Arab countries in mobilizing the youth and marginalized groups.
In chapter six, Filiu examines the conventional assumption that “the alternative to authoritarianism in the Arab world is chaos.” To him, the recent uprisings have showed the opposite and taught us that “the alternative to democracy is chaos.” The region is no more stable with authoritarian rulers and the price of the Western backing to the authoritarian rulers is no longer stability. Chapters seven and eight are on lessons that we can learn from the Arab uprisings about Islamist politics. By making democracy and freedom their master discourse, the recent events have pushed Islamists to make a stark choice about their political identity: either choose the democratic path or lose in the long run. Similarly, the recent events made radical Islamic movements such as al-Qaeda irrelevant as they have showed people that it was possible and more feasible to change the status quo through more peaceful methods. In chapter nine, Filiu shows that the only thing that the uprisings have not changed is the Arabs’ sympathy for the Palestinians. The suffering of the Palestinians in Gaza and the West Bank is still a significant concern in the new Arab world. In the final chapter, Filiu disappoints those who had expected a domino effect in the region and shows how diverse the political systems in the Arab world are, and how difficult it is to produce the same level of political change in each Arab country.
Filiu’s book is a timely contribution in understanding the Arab uprisings and their impact on the Middle East, Islamist politics, and social movements. More importantly, it is a significant study that corrects some of the incorrect assumptions about the Middle East in the Western academy and media. The book does a great job of presenting the complex set of events in clarity and brevity. The book is prepared for a general reader and has an accessible writing style, but Filiu gives the necessary historical background to make his arguments solid. Related to this, he makes historical parallels to better account for the political change in the Arab world. Despite its brevity, the author engages with various disciplines such as history, political science, communication, and sociology. One also gets the details of the Arab uprisings as the author reports what really happened on the ground in various chapters throughout the book.
The strength of the book, however, is also its weakness. Engaging with various disciplines and drawing wide-ranging conclusions on several subjects in brevity comes with a cost: The book does not have an overarching structure and argument. The lessons that Filiu suggests are stand-alone lessons and are not well tied to an organizing theme. Filiu could have narrowed his focus and the extent of the lessons. The book is good for readers who are not familiar with the Arab uprisings, but those who are familiar with the Middle East and expect deeper analysis will find little in the book. 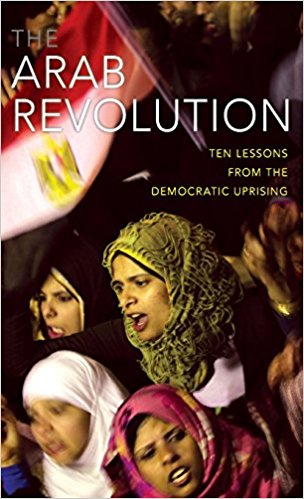 A Country on a Tightrope: The Economic Crisis and the End of an Era in Spanish Politics