The Protections for Religious Rights: Law and Practice

In the last decade, discussions around religious rights, particularly the rights of Muslim migrant populations in the West, have occupied considerable space in the media, academia and political life. These discussions often revolve around the notion of ‘Islamophobia’ and only very recently has the matter been approached from a rights and human rights angle. This volume represents an important example in this direction. It presents a fairly comprehensive assessment of the legal protection of religious rights and has an international perspective, although it is mainly written with England and Wales in mind.

In the last decade, discussions around religious rights, particularly the rights of Muslim migrant populations in the West, have occupied considerable space in the media, academia and political life. These discussions often revolve around the notion of ‘Islamophobia’ and only very recently has the matter been approached from a rights and human rights angle. This volume represents an important example in this direction. It presents a fairly comprehensive assessment of the legal protection of religious rights and has an international perspective, although it is mainly written with England and Wales in mind.

One can analytically divide the volume into three parts. The first part provides an overview of international and European standards and protections available for religious rights. The second part, which is not written by the book’s authors themselves, looks at the protection of religious rights in Australia, Canada, India, New Zealand, Northern Ireland, the Republic of Ireland, South Africa, Turkey, and the United States. The third part deals with ‘domestic protections’ for religious rights in the United Kingdom. As such, the book brings together in a single volume a monograph dealing with the protection of religious rights at the domestic and international levels and an edited book dealing with different legal systems from around the world.

Readers should not expect to find much argumentative material in the volume. The topics are considered in a quite matter-of-fact style. While this improves the authoritative status of the book it may make it somewhat unattractive for those who are looking to understand the broader European and global tendencies that give rise to the enhanced significance of religious rights. The authors point out that the problem of religious rights is due to two main developments, both of which are legal: “new laws promoting self-determination,” and “new equality laws” (p. 2). As they put it, as the laws become more ‘permissive’ they create situations where religiously observant people ‘become party’ to other’s conduct. For instance, as same-sex marriages are legalized, public officers who are required to register them may find themselves torn between their professional duties and their religious identities. In the second case, new equality laws prohibit discrimination on the basis of religion and this may create problems for the internal organization of religions. A typical example would be the exclusion of women from the position of ‘priest, rabbi or imam.’ As the authors admit in the preface, this is a textbook. So rather than engaging in a long legal argument, they prefer to provide an analysis of the facts, legal principles and landmark cases. This approach helps them put together an impressive collection of very interesting cases which are incisively and carefully analyzed. The authors do not forget to direct the reader to key discussions in the socio-legal literature in the footnotes. This greatly informs the reader and allows her to pursue the debates with further research.

The overall approach of the volume to the protection of religious rights is a message of toleration and plurality. The jurisprudence and the principles of the European Court of Human Rights (ECtHR) is compared with the UN conventions and the work of the monitoring bodies, and the former is found wanting. The ECtHR approach is found too rigid and at times not very consistent. Especially with regard to the right to manifest religion, the Strasbourg Court is found to be restrictive. Another significant point that the authors make is that secularism is not neutralism. Both religiosity and secularism are worldviews on their own and they are equally worthy of protection. While the authors do not develop and discuss this significant point too much, it is a central message in the text. Finally, the authors also point out that the protection of religious rights is a developing legal field and that legal institutions should be flexible and pragmatic in finding balance between the avoidance of discrimination and the maintenance of state neutrality.

The comparative cases in the second part of the book are written by experts in the field and are in line with the broader approach of the authors. These chapters also provide an interesting perspective on the protection of religious rights in different parts of the world. Although the chapters dealing with specific countries are not organized symmetrically, almost all of them deal with the significant issues of education, employment and dress. These three issues comprise the most significant areas of concern when it comes to the protection of religious rights and where the need for striking a balance between pluralism and neutrality is evident. One problem with this part of the book is that authors neglect to adequately justify the selection criteria of countries. While Northern Ireland and Ireland are understandably included due to their proximity to England and Wales, the reason for including Canada, South Africa, India and Turkey is not very clear. While membership in the Commonwealth seems to be an implicit criterion, this does not explain why Turkey is included. One can infer that the latter is included due to the landmark cases of the ECtHR. However, the fact that the authors hardly make any reference to this part of the book in the rest of the text indicates a missed opportunity to use comparative legal analysis.

The final part of the book goes back to the legal landscape in the UK, and especially dwells upon questions of public services, employment, education, religious expression, family, and rituals. The authors continue their incisive approach to these subjects and inform the reader in great detail. As the ECtHR cases were already reviewed in the first part of the book, this section contains some repetition. But it also provides a lot of new analysis and information about the UK and in certain sections provides cases from other countries for comparison.

Although the book is written especially for the UK situation, it provides an expansive international perspective. This is a very comprehensive and informative volume for anyone working on the newly developing field of religious rights. It would be immensely useful not only for researchers but also for use in advanced courses on human rights. 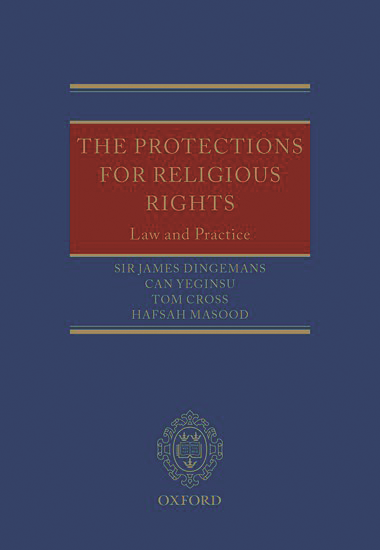 Islamophobia, Neoliberalism, and the Muslim ‘Other’