How has the Syrian regime, being the ‘odd man out’ in the Middle East, survived for so many years under the Assads? Given its survival, what makes the current uprising, now nearing its third year, different?

How has the Syrian regime, being the ‘odd man out’ in the Middle East, survived for so many years under the Assads? Given its survival, what makes the current uprising, now nearing its third year, different? And did the Assads always act on ideological grounds? These are the central questions that scholar and foreign policy analyst Bente Scheller tries to answer in her book, The Wisdom of Syria’s Waiting Game: Foreign Policy Under the Assads, by analyzing the Assads’ foreign policy and the link to domestic policies and the current revolt.

Scheller argues that a central tactic for Hafez al-Assad’s 30 year rule was ‘waiting’ – meaning that if they waited long enough, international actors’ policies towards Syria would shift – and that Bashar al-Assad continued this tradition. She supplants this with many examples where Hafez al-Assad was successful; for instance, Rafiq al-Harriri’s assassination in Lebanon in 2005 was widely blamed on Syria and there was much international and regional criticism. However, the international approach changed without Syria altering its stance or bowing to pressure and nothing was ever done to hold Syria accountable. Furthermore, she argues that the regime was willing to compromise on ideology when it would be beneficial for their longevity. Yet as the Syrian revolt has shown, this strategy has not been successful in suppressing the uprising nor in deflecting international criticism. Nevertheless, the strategy of waiting has not been a complete failure, as Syria has managed to avoid any international military intervention. In order to show how ‘waiting has served the regime well, Scheller describes Syria’s relations with its neighbors and major international actors, such as the U.S. and Russia, as well as its foreign policy strategy with the various players.

Scheller’s book is valuable at this time particularly as it highlights Syria’s previous relations with its current allies, and how that relates to the uprising. In particular, her chapter on Iran shows that the relationship goes deeper than simply a “Shiite axis,” as Syria supported Iran during the Iran-Iraq War in the 1980s in order to thwart Saddam Hussein’s plan for regional dominance. Syria’s support for various resistance groups, such as Hamas and Hezbollah, shows that sect never featured strongly in the regime’s consideration. That said, Scheller also examines changing regional dynamics with the recent Sunni-Shiite schism, and how that has altered Syria’s relations with its former nemesis, Iraq. One of the book’s strengths is that by describing Syria’s foreign policy and relations with various international actors, the reader is allowed to form his or her own conclusions about what has enabled the Assads to remain in power. While the author does offer her own insights and explanations, she does not present them as the only possible rationalization.

Scheller is also careful not to paint the Assad regime solely as a brutal dictatorship, which is important to gain an accurate picture and understand today’s conflicting views regarding the Assads. While not exceptionally detailed, she discusses the Syrian government’s open door policy for Arab refugees, particularly those from Palestine and Iraq. Palestinian refugees were largely integrated and given rights on par with Syrian nationals, bar citizenship, while Iraqi refugees were allowed to flee the destruction following the 2003 invasion of Iraq. This strengthened the Assad regime’s image as the protector of Arab rights.

At times, Scheller seems to go against her central theme that the Assad regime’s main approach in foreign policy was waiting, and that Hafez al-Assad has shown to act “more on pragmatic than ideological grounds” (p. 18). Based on her own analysis, it would seem that Hafez al-Assad waited strategically when that seemed to be the best tactic, and acted when that it was in their favor, such as their support for the U.S. during the Gulf War. While waiting definitely features into Hafez al-Assad’s strategy, it does not seem to explain why his regime lasted so long or why his son’s regime has not compromised with the protesters, particularly as many of the Assads’ international decisions were seen as provocative – such as allowing Palestinian resistance groups, such as Hamas, to have a base in Syria despite being branded as “terrorists” by the U.S., and Bashar al-Assad’s outspokenness with regards to the 2003 U.S. invasion of Iraq. Can what ostensibly seems to be ‘waiting’ be characterized as more than just ensuring the longevity of the regime? It would appear that cooperating with more powerful international actors could ensure the durability of the regime more than provocative international dealings. Waiting has only been successful because the international community had other more pressing considerations in the Middle East, namely Saddam Hussein in Iraq, the Islamic revolution in Iran and the Israel-Palestine conflict. It seems that the Assads were able to merge ideology and pragmatism in their foreign policy and ensure their prolonged existence without making large ideological compromises.

The chapter on Syrian-Israeli relations is slightly problematic. Scheller argues that it would seem that the Syrian-Israeli issue should be the easiest to solve as it is purely territorial, referring to Israel’s occupation and illegal annexation of the Golan Heights. However, she states that the reason there has never been an agreement is both sides’ unwillingness to compromise, as well as mutual suspicion. This assessment decontextualizes Israel’s role in the Middle East and overlooks the issue of the Palestinian refugees. Syria is currently home to over 500,000 Palestinian refugees, the majority of which are stateless. Any agreement with Israel would have to take into account the refugees, which is something that Israel is not willing to compromise on. Moreover, Syria’s mistrust of Israel is based on fact; after Israel’s occupation of the West Bank, Gaza, East Jerusalem and the Golan Heights, Israel (illegally) annexed East Jerusalem and the Golan. Israel also moved more than 500,000 Israeli settlers to the Occupied West Bank in contravention of international law. Thus, to characterize Syria’s actions simply as ‘stubbornness’ misses the point of principle and fact.

Bente Scheller’s book is a timely analysis of Syria’s foreign policy, and offers an interesting view regarding the agenda and reasoning behind the Assads’ foreign policy. She posits that Syria’s strategy has always been to wait out international criticism of its policies, as it eventually changes without the Syrian regime having to change its stance. This is important as it helps to explain Bashar al-Assad’s current strategy in the face of international condemnation of his treatment of the uprising. That said, as Scheller herself shows, there was more to Hafez al-Assad’s strategy than waiting. Moreover, some chapters, particularly on Syrian-Israeli relations, are overly simplistic and ignore the history and law surrounding the conflict. 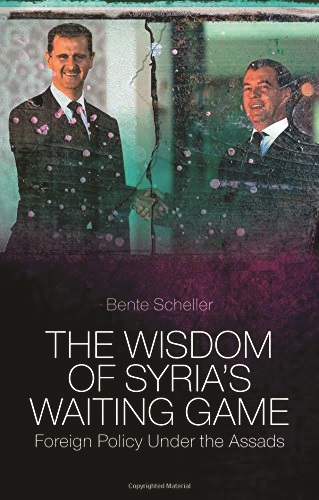