This edited volume on European constitutionalism is a compendium of essays with different interpretations on the constitutional authority and nature of the European Union (EU). This issue has faced various challenges in the last decade not only by national courts and referenda, but also vis-à-vis other international and regional actors, such as United Nations (UN) and European Court of Human Rights (ECHR).

This edited volume on European constitutionalism is a compendium of essays with different interpretations on the constitutional authority and nature of the European Union (EU). This issue has faced various challenges in the last decade not only by national courts and referenda, but also vis-à-vis other international and regional actors, such as United Nations (UN) and European Court of Human Rights (ECHR). The volume begins with Joseph Weiler’s prologue and includes five essays that focus on original and deeply entrenched questions surrounding the political and legal constitutionalism of the EU – such as federalism, supremacy, democratic legitimacy, polity questions, constitutional pluralism and the role of international law – by elaborating on judicial responses and trasnational developments that embrace international international and regional actors of governance beyond the EU. The most striking and intellectually stimulating part of the book is the “Dialogical Epilogue,” where Joseph Weiler interacts with the authors by posing questions and reflecting his criticism. In his prologue, Joseph Weiler defines the book itself as a “critical exposé” that casts doubt on global and pluralist constitutionalism. By expressing skepticism about a “constitutional discipline without polity and without something resembling the habits and practices of democratic legitimacy,” Weiler emphasizes that global constitutionalism is problematic both normatively and prescriptively since it lacks the relevant prerequisites. He regards both global constitutionalism and constitutional pluralism as “terribly underspecified terms.” Here, it should be noted that Weiler was opposed the European Constitution because he believes that it threatens both the originality and nobility of European integration and its legal order. Emphasizing voluntarily subordination and acceptance of European legal premises, he defends constitutional tolerance, but not constitutional pluralism, and rejects the presumption of incommensurably of authority in case constitutional orders contact. According to Weiler, a pluralistic approach that denies hierarchy ignores the fact that democratic constitutionalism is based on self-restraint while striking a balance between hierarchy and pluralism. His thoughts transcend the boundaries of EU law and contribute to constitutional theory: “I would even risk suggesting that in our advanced market societies, the pendulum has swung, perhaps, too much in the direction of the pluralism, to the detriment of the social and the polity (p. 18).”

The first two essays of the book focus directly on the debate on the character of the EU and assumptions of being international and constitutional, as well as the place of the EU in political modernity. Bruno de Witte analyzes the EU as an international and continuing legal experiment by referring to its history, states’ practices as well as its basic doctrinal and judicial interpretations. De Witte follows the conclusion of Wyatt and Dashwood, accepting the EU as a developed international organization containing an embryonic federation (Wyatt and Dashwood’s European Union Law, London: Sweet & Maxwell, 2006, p. 132). He states that the member states have clearly experimented with the Lisbon Treaty’s “toolkit of international law” through the extensive use of opt-outs, declarations, transition clauses, etc. Even from the perspective of the European Court of Justice (ECJ) and its purposive interpretation approach that defends the autonomy of EU law, de Witte defines EU law as “an advanced species of the genus international law.” He claims that classifying EU law as an international law experiment will have internal and external benefits. Internally, this would offer a sober assessment about member states’ position as “master of the Treaties” and their dedication to international law, e.g., rule of consensus on the treaty revision. Understanding EU law as a special part of international law may also maximize its external effect as a source of legal inspiration for other states and organizations.

In the second essay, Neil Walker concentrates on the assumption that the EU reflects a variation of political modernity that contributes to late modernity. He submits a frame of modernity based on a threefold scheme, including collective agency (popular sovereignty and its challenges), generative resources (interaction of particularist and Universalist themes), and political ontology (tension between collectivism and individualism). By using this frame, he aims to refrain from “terminologically reductive answers” to the nature of the EU. Walker also draws attention to the “instrumentally grounded legal supranationalism” provided by ECJ during the developmental stages of the EU, where the legal instrument was both the object and agent of integration (p. 86, comp. also Dehousse, T & Weiler, J., “The Legal Dimension”, in Wallace, W, (ed.), The Dynamics of European Integration (London: Printer, 1990), p. 243). He assumes that “the prominence of institutional and legal-instrumental dimension offered both a vital channel and a limiting condition of its (EU’s) collective agency.” Most importantly, Walker affirms that the ECJ’s rights-centered approach refers to an individualist emphasis in the EU, which “sits in an increasingly uncomfortable balance with the more collectivist traditions and imperatives of the EU” (p. 91). In favor of documentary constitutionalism, he comes to the conclusion that a revival constitutional alternative or project cannot be ruled out (p. 102-104).

The essays by Gráinne de Búrca and Daniel Halberstam look at the pluralist and constitutionalist approaches based on the positions of the Court of First Instance (CFI, namely General Court after Lisbon Treaty) and the European Court of Justice (ECJ) in the Kadi cases (see especially T-315/01 Kadi v Council and Commission [2005] ECR II 3649; C-402/05 P and C-451/05 P Kadi and Al Barakat v. Commission and Council, [2008] ECR I-6351; T-85/09 Kadi v. Commission, 30 September 2010). These well-known cases have external implications for European constitutionalism. While the CFI adopted a constitutionalist approach in Kadi 1 by referring to the unity of EU and international law, and accepting the hierarchy of international law, the ECJ upheld a diametrically opposing stand – judicial pluralism – on appeal. The ECJ defined the EU as an autonomous system that decides its own standards and values separately from international law. De Búrca presents an insightful analysis of pluralist approaches that favor politics over international legal norms. She also co-existence of fragmented entities and decisions on the one hand, and constitutionalist approaches based on Kantian cosmopolitanism and global harmonization of values on the other. Here, Kantian constitutionalism and new interpretations submitted by Habermas and Koskenniemi are of particular relevance. De Búrca offers a soft constitutionalist approach by referring to a renewed scholarship of Kantian cosmopolitanism and dialogic approaches after the Solange case law (Solange I in 1974 and Solange II in 1986) was discussed in the German Federal Constitutional Court (BVerfGE 37, 271; 73, 339 BvR 197/83). De Búrca’s soft constitutionalist approach is a clearly structured and balanced conceptualization of the mutual recognition and preservation of European and universal spheres as well as legal-constitutional values of European and international legal orders. It provides a path for the EU to keep its commitments to international law as a global actor and its own values regarding fundamental rights and guarantees of due process: “Had the Court of Justice (…) invoked international norms rather than insisting on the primacy and the relevance of internally determined EU standards when refusing to implement the Security Council Resolution without due process guarantees, it would not only have provided a better example for other states and organizations contemplating the implementation of the UN sanctions regime, but it would have also strengthened the claim of the EU is an actor which maintains a strong commitment to international law and institutions” (p 138). By citing the ECJ’s developing case law on international economic and maritime law, de Búrca comes to the conclusion that the EU resembles the U.S. in regards to “instrumentalist engagement of international law” (p. 148-149).

Nico Krisch’s final essay on pluralism in post-national law could be regarded as an argumentative paper in support of normative pluralism. Regarding pluralist alternatives and criticism of classical constitutionalism, Krisch supports a normative appeal of pluralism not only as a paradigm that reflects the fragmented structure of the postnational order, but also as a chance for divided societies “to contest, destabilize, and delegitimize entrenched power positions” (p. 261). Since Krisch relates his normative pluralism to public autonomy and prefers it to the ultimate claim to authority, he clearly defines hierarchy, entrenched institutions, and the unifying or accommodating tendency of constitutionalism. He also rejects “all-out laissez-faire” and speaks of polities that deserve respect and tolerance. Accordingly, depending on practices of public autonomy, he determines the polities that deserve respect: “The weight of a collective’s claim will follow from the strength of its social grounding, of the participatory practices that support as well as the plausibility of its attempt to balance inclusiveness and particularity” (p. 252). However, as Weiler asserts, it is not clear who and which method determines the polities that deserve respect (p. 302). Here, Krisch does not have assurance against the risk of arbitrariness (p. 303-304). Assessing the pluralist approach from the perspective of the rule of law, Krisch attacks its core concepts – legal certainty and integrity – by stating that those are often elusive even in domestic constitutional settings. Although Kirsch adopts a normative pluralist approach in compliance with the notion of systemic pluralism based on conflicting conceptions of laws for each polity, the concretization of this approach and its interaction with current conflicts are largely absent.

The Worlds of Constitutionalism is not only a stimulating book with in depth discussions on European constitutionalism(s), but also a printed forum of high quality intellectual debate on the dominant issues of constitutional theory in general. It appeals to EU law circles, legal and political researchers, and decision-makers. Providing the same intellectual challenge and motivation as European Constitutionalism Beyond State by J.H.H. Weiler and Marlene Wind (Cambridge: Cambridge University Press, 2003), the book could be regarded as the most recent innovative work on European constitutional scholarship. The book’s dialogical epilogue is a vivid element and provides the opportunity for interaction and responsiveness. Through its Turkish lens, where socio-political fragmentation and the dominance of politics are striking features and the EU has never been discussed in the political arena from constitutionalist point of view, the book becomes more inspiring and deserves ultimate attention. 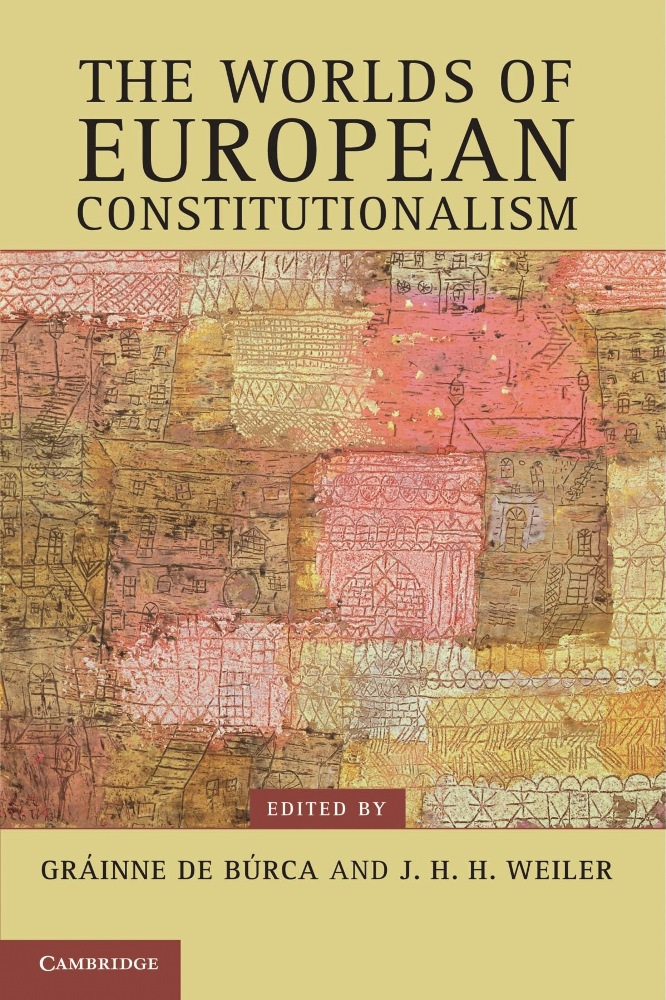 The Ethos of Europe: Values, Law and Justice in the EU