Turkey, the Jews, and the Holocaust

Before wading in, as an outsider, to the controversial issue of Turkey and the Holocaust, a reminder of what was lost that can never, ever be regained. More important than a people or country’s so-called honor or the selfish need to proclaim moral purity or superiority over others, there are the cries of the victims and their loved ones. No earthly justice, no laws, or apologies, or “proof” of innocence or vows of change will alter that. There are some wounds that never fully heal. Numbers – and we are always inundated by numbers when writing of mass atrocities – fail to convey the horror, even as such accounting must occur. Too many tragedies, too many atrocities, fuelled

Before wading in, as an outsider, to the controversial issue of Turkey and the Holocaust, a reminder of what was lost that can never, ever be regained. More important than a people or country’s so-called honor or the selfish need to proclaim moral purity or superiority over others, there are the cries of the victims and their loved ones. No earthly justice, no laws, or apologies, or “proof” of innocence or vows of change will alter that. There are some wounds that never fully heal. Numbers – and we are always inundated by numbers when writing of mass atrocities – fail to convey the horror, even as such accounting must occur. Too many tragedies, too many atrocities, fuelledby selected groups of humans and supported or allowed to thrive by the majority continue to wreak havoc. And yet, cries of denial, “not me” or “not us” suck the needed impetus and energy for deep evaluation, moral probing and just action. In the Holocaust, in particular, there are no pure victors, as such, not only because of the accusations against Allied Forces of war crimes as in the Bombing of Dresden, but because wherever there is war and violence, where peace fails, all fail. There were holy and good people amidst the horrors of the Holocaust, thankfully, there have always been such people, but for the victims, there were never enough; there never are enough.

As a Catholic theologian from the United States but living in Europe for over a decade, I know there is no shortage of my own national and religious heritage that can humble my identities: not only from my individual, daily moral failures, but the mixed and checkered histories and roots of the United States, where the legacy of African Slavery and the genocide against Native Americans still need to be addressed, to the past failures of the Catholic Church in its treatment of non-Catholics and in the more recent child sex abuse fiascos. What is called for is not denial, rebuttal, and self-defensiveness, but deep listening to the memory of the victims, to read the bones, if we must, and if there are no bones, to be open and creative to other means of contact. The cries of the victims are there if we seek to hear.

Corry Guttstadt’s Turkey, the Jews, and the Holocaust is a powerful, meticulously researched, and courageous testament to the Turkish Jewish victims of the Shoah. It is a fine example of a victim-centered approach to history which also manages to be thorough, objective, and wide-ranging. It was first published in Germany in 2008 with the English translation available in 2013. It is divided into two main parts. The first part tells the history of Turkey during the National Socialist era (1933-1945). What is clear is that policies made in Turkey before or unrelated to Hitler’s rise to power, especially those decrees against Turks living or having moved abroad, coupled with racist and propagandist tendencies among some levels of the population to see only the Muslim Turk as Turkish, exacerbated, if not negatively influenced, the Turkish policy towards those Jews once their lives were in danger and the priority was to avoid explicit involvement in World War II. The second part examines the fate of Turkish Jews in Germany, Austria, France, Belgium, the Netherlands, Italy, Southeastern Europe, and the Aegean Islands – a fate undermined by Turkey’s “relatively little effort to save its Jewish citizens” (p. 313).

In Guttstadt’s book, numbers, facts, and statistics are soundly presented, similarly there are given individuals like Davud Şalom, his wife Daisy, and baby Jean Marc first sent to Drancy on 30 November 1943 (p. 224) and then to Auschwitz on January 20, 1944, along with 116 other Turkish Jews living in France in 1944, thirty of them children, including Jean Marc, four years old Denize Verez and six-year old Moris Halfon. As Guttstadt writes: “All of these people were on the Turkish consul’s list of January 17, 1944” (p. 235). At the same time, we also hear of İnayetullah Cemal Özkaya, the Turkish Council General in Athens, who passed off many Jews in Salonika as Turkish Jews to take advantage of the protection afforded to being Turkish, thus saving perhaps as many as 100 Jews (39 of whom were Turkish) in that instance (p. 293). Other stand-out Turkish diplomats include the Turkish council in Rhodes, Selahattin Ülkümen, who saved more than forty Jews from Rhodes and was later honored as “Righteous among the Nations” by Yad Vashem (p. 297); and Consul General Nebil Ertok in Milan (p. 279). Unfortunately, such diplomats were more the exception than the rule.

Questions proliferate: was not Turkey neutral in the war until the end, but always, was it feasible, seeking to save lives, even if it meant risking one’s own? Remember, in the Shoah there are few heroes and no victors and the cries of the victims call out. While there were individual Turkish diplomats who deserve praise for saving lives, as noted above, Guttstadt makes a convincing case that “Through its passive stance, Turkey violated its obligations to protect its citizens abroad.” She is adamant, however, that “Criticism of Turkey’s position must not, under any circumstances, be used to mitigate the crimes committed by the Germans” (p. 312). This is not a book seeking to denigrate Turkey but could provide the means for a deeper re-evaluation and honest assessment of the history of the treatment of non-Muslims within Turkey. In this regard, any such assessment must include the horrors of the Armenian Meds Yeghern. Again, the victims cry out, and again, it is not the time for saving-face and moral bluster, but silence and listening and openness to the potential for difficult and painful truths. Crucial to such ethical remembering is to listen to the victims and their families. Sometimes, from such sources, great hope and light can be found. For example, Guttstadt notes that “One interviewee, Annie Benveniste, also reported that the Muslim imam of a mosque in Paris issued Turkish Jews the appropriate papers” (p. 197). Although these stories cannot be used unduly to conceal or explain away the moral failures, they also must be remembered and passed on: for such hopeful stories are especially valuable to remember today. 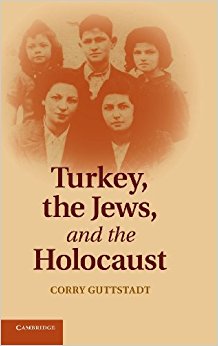