Turkish-Greek Relations Rapprochement, Civil Society and the Politics of Friendship

Leonidas Karakatsanis’ book looks at the reconciliation efforts between Turkey and Greece which, according to the author, resemble a pendulum that repeatedly swings between two extremes of enmity and friendship. The book is an expanded and updated version of a Ph.D. dissertation written at the University of Essex’s Ideology and Discourse Analysis Program. It relies heavily on scholars like Derrida, Schmitt, Laclau, and Mouffe. The book focuses on diverse initiatives intended to promote the Turkish-Greek friendship in the post-1974 era. The author uses the term “floating signifier” to describe the existence of a diverse set of groups with the broader aim of friendship. It is the friendship discourse, which is analyzed by examining meanings attached to the language, signs, images, representational practices, and bodily encounters.

Leonidas Karakatsanis’ book looks at the reconciliation efforts between Turkey and Greece which, according to the author, resemble a pendulum that repeatedly swings between two extremes of enmity and friendship. The book is an expanded and updated version of a Ph.D. dissertation written at the University of Essex’s Ideology and Discourse Analysis Program. It relies heavily on scholars like Derrida, Schmitt, Laclau, and Mouffe. The book focuses on diverse initiatives intended to promote the Turkish-Greek friendship in the post-1974 era. The author uses the term “floating signifier” to describe the existence of a diverse set of groups with the broader aim of friendship. It is the friendship discourse, which is analyzed by examining meanings attached to the language, signs, images, representational practices, and bodily encounters.The book covers the time period between 1974 and 2013. However, it also discusses the early peace attempts of Atatürk and Venizelos, as well as the alliance of two countries in the aftermath of the Second World War against the rising Soviet threat. Karakatsanis argues that the armed conflict in Cyprus in 1974 had reactivated the already existing Greek national habitus “picturing the Greek nation as the eternal victim of Turkish aggression” (p. 10). Similarly, the official Turkish historiography depicted the image of Greeks with clichés such as “we threw the Greeks into the sea in 1922” (p. 13).

In the first part of the book, a spectre of the leftist identity in both countries is described with the idea of the ultimate goal of establishing Turkish-Greek friendship. The internationalist discourse within leftist movements had manifested itself as a discursive pattern of promoting friendship. Among the people that were involved in this movement were Yaşar Kemal, Zülfü Livaneli, Aziz Nesin, Mikis Theodorakis, and Maria Farantouri, who used certain discourses like left, democracy, and friendship as a common vocabulary in the post-1974 period when bilateral relations reached its nadir. Moreover, in the aftermath of the 1980 coup in Turkey, EAMLET (Association for Solidarity between the Greek and Turkish Peoples) was founded with the participation of Turkish radical leftists who fled the country via the Greek border.

Apart from the involvement of the radical left and politics of comradeship, there were some initiatives by leftist politicians across the fluid border in the Aegean Sea. Karakatsanis gives the examples of the Mytilene-Dikili Peace Festival and Chios-Çeşme town-twinning as initiatives undertaken by leftist politicians, both depoliticizing the national and politicizing the local. Until the late 1990s, the left had been the vanguard of rapproachment with a continuous repetition of the “old” and “new” discourses.

In the second part of the book, the author describes non-leftist initiatives aiming to promote Turkish-Greek friendship such as the Abdi İpekçi Peace and Friendship Prize, the Greek-Turkish Friendship Committee, and the Turkish-Greek Friendship Association. Among these, the story behind the Abdi İpekçi Peace Prize is very interesting for the Turkish reader. In Greece, there was a widespread belief that Abdi İpekçi was assassinated because he was actively trying to promote peace between Turkey and Greece. Indeed, an annual prize was awarded to people who promoted Turkish-Greek friendship in his honor between 1979 and 2001.

Apart from these three organizations, the book analyzes the newly emerging actors of peace and conflict resolution, including the EU-funded civil society organizations, business councils, and representatives of the tourism industry, especially after the Imia/Kardak crisis in 1995 when the two countries came to the brink of war. As further evidence of the repeated swings between enmity and friendship, Karakatsanis shows how the activities of these groups were affected by the events like the capture of Abdullah Öcalan in the Greek embassy in Nairobi and the 1999 earthquakes in İzmit and Athens in a negative and a positive way respectively. The book makes a strong case to identify the hegemonic discourses since the 1999 rapproachment, including common interest, funding, Europeanization, and diplomacy. Karakatsanis describes the current situation in the realm of Turkish-Greek rapproachment as a double pendulum in which the feelings of excitement and boredom exist in parallel to friendship and enmity.

Methodologically, the book utilizes ethnographic research, political discourse analysis, archival research, and interviews. In addition, the author himself also conducted participant observations at a couple Turkish-Greek friendship festivals. As a result of extensive fieldwork in both countries, the theory is harmonized with rich information collected by the author. In spite of this richness of original material, Karakatsanis’ work suffers from the limitations of its own methodology. He bases his arguments mainly on anecdotal evidence by analyzing certain discourses he witnessed during his fieldwork. For instance, he gives examples from his personal experiences in Çeşme bus terminal or Beşiktaş İnönü Stadium as signs of enmity against the Greeks embedded within the daily practices in Turkey. His observations might be true for that specific context but their generalizability is questionable.

Another limitation of his study is geographical. Karakatsanis’ fieldwork is mainly confined to Western Turkey where people are known to be culturally the most similar to the Greeks, which might potentially stimulate the pendulum of friendship and enmity. His overemphasis on the Aegean coast of Turkey contributes to his underestimation of the asymmetrical relationship between Turkey and Greece. He does not recognize the fact that Turkish official historiography has similar negative depictions of other ethnic groups, like Armenians and Arabs. In other words, his mere focus on the initiators of peace residing in Western Turkey creates a selection bias which overestimates the relative weight of the feelings of enmity and friendship in the Turkish public against “the Greek.”

Throughout the book, discourse analysis is treated to have a very strong explanatory power almost for everything without acknowledging the contributions of alternative theories and frameworks. Explanations of the Turkish-Greek conflict/rapproachment based on realism and game-theory are ignored. Bilateral disagreements over the Aegean Sea and Cyprus are depicted as merely competing nationalist discourses that should be universally condemned. In summary, the whole narrative of the book deconstructs everything but itself by discrediting all other research programs.
In spite of these weaknesses, the book is very enjoyable for the academic reader who is interested in topics related to Turkish-Greek relations, post-structuralism, discourse theory, and ethnographic research. Using a discourse analysis framework, Karakatsanis makes an original contribution to the literature, which enhances our analytical leverage to understand politics and society in Turkey and Greece. It also draws potential challenges for future efforts to promote Turkish-Greek friendship that should go beyond existing discourses to make it a reality. 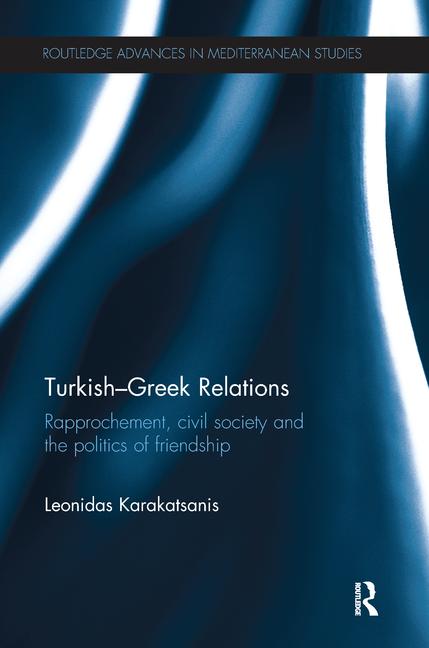 Tormented by History: Nationalism in Greece and Turkey