Whatever Happened to the Third World? A History of the Economics of Development

The book is very well organized and divided into seven chapters. In his detailed and comprehensive work, de Haan lays out the main terms related to the subject, country classifications, what ‘third world’ denotes, and what happened there in terms of economic development. He provides development theories of first, second, and third generations, and finally discusses the developing part of the world’s share of globalization and international trade

Once upon a time, there were countries that could not be categorized developmentally as anywhere close to ‘the first nor second world.’ They, therefore, started to be called ‘the third world.’ As time went on, these countries came to be classified into different groups. Development, along with economic growth, has been a big issue for developing parts of the world for decades, yet most of these countries are still struggling to overcome poverty, inequality, corruption, bad governance, and so on. Peter de Haan, in his remarkable book, discusses the development adventure of these countries in the context of the political economy of development.

In a bipolar globe, with the West as the ‘First’ and the Soviet Union as the ‘Second World,’ the rest was called the ‘Third World.’ ‘Third World,’ as a term, was coined by Alfred Sauvy in an article in L’Observateur on August 14, 1952. In Sauvy’s allocation, ‘Third World’ consisted of the countries in Latin America, Africa, and Asia which are not homogenous at all, as may be expected. India, for example, is a huge country compared to Malawi, yet they are classified together in the same group. Slightly developed countries, moreover, were put into the same level as underdeveloped ones in this very broad classification. Thus, it is fair to state that ‘Third World’ refers to everything that is not in Europe, America, or the Soviet Union (p. 2). So, what happened to the ‘third world’? More specifically, why have some of the countries classified as such flourished while others have deteriorated? This is the question de Haan successfully answers in this book.

The book is very well organized and divided into seven chapters. In his detailed and comprehensive work, de Haan lays out the main terms related to the subject, country classifications, what ‘third world’ denotes, and what happened there in terms of economic development. He provides development theories of first, second, and third generations, and finally discusses the developing part of the world’s share of globalization and international trade. Even though the book is about economic development, de Haan presents a broader point of view to comprehend the process of development by taking an interdisciplinary approach. De Haan discusses new institutional economics, economic geography, new political economics, economic anthropology, and economic history in his analysis (p. 193). The main theme of the book is best summarized in his words: “economics alone cannot explain the modern world… GDP, income per capita, income and wealth distribution, investment and saving rates, taxes, and market prices… All of them explain a lot about the dynamics of economic growth, but not everything” (p. 236).

The equivalence among countries that had existed before the Industrial Revolution disappeared with the start of it and has not returned since. The Third World countries, variously labeled backward, less developed, developing, emerging, etc., have been trying to catch up and close the big gap with the developed ones for decades. Many have followed policies inspired by the experiences of developed countries, which clearly are not salutary. The United Nations defines the period between 1960 and 1970 as the ‘Development Decade.’ Repeated oil crises in 1973 and 1979 ended the global age, and development became an issue affecting all. High inflation rates, indebtedness, difficulties with growth, stagflation, and recession are some of the issues that developing countries faced during the course of these crises. Recovery has taken years for developing countries, especially in Latin America and Sub-Saharan Africa (p. 5). Since the beginning of the 1960s, developing countries have applied various policies to become developed countries, yet only a few have achieved this goal.

What makes de Haan’s work unique is the unorthodox and wholistic perspective he adopts, as well as the theoretical framework intermingled with his personal experience and those of his colleagues. The book is very rich in terms of examples and ideas; de Haan draws upon great economists’ ideas on development economics, from Dornbusch to Rodrik, to show the evolution of development economics. He also gives both historical and current examples from country to country. The plentiful support documents and appendixes, along with the examples provided in the book, make it easy to follow the logic and grasp the ideas behind this comprehensive approach. Many developmental economists do not take political and cultural turmoil into account while analyzing a country’s economy. De Haan, however, does so, for instance, to demonstrate how the civil war in Sri Lanka, which started in 1983 and took 13 years, financially damaged the country in amounts calculated by the “World Bank as $4 billion –twice the size of Sri Lanka’s GDP in 1996” (p. 13). Some outcomes can only be explained as a result of certain circumstances. As De Haan states, “after all, each country has its unique history, culture, social values, what have you” (p. 41).

De Haan critically examines the most recent approaches to development economics. Nowadays, one of the most popular approaches to improving development is to strengthen institutions. Having explained the over-emphasized theory of institutionalism, de Haan offers a criticism by asking how to initiate economic growth in poor countries and how to sustain it. He argues that institutions are not the answer to the former question, if not the second. He adds that institutions are important, yet the answer to these queries is missing from the theory (p. 207). De Haan also critiques theoretical reliance on the rationality of the human being. Individuals do not choose wisely, as economics claim; instead, economic systems shape people’s behavior by making them “more selfish or more short-sighted than they might be otherwise” (p. 194).

De Haan leaves no one behind, from classics to supporters, and even dissenters. He presents not only mainstream ideas, from old to new, but also controversial approaches and theories. From Ellsworth Huntington’s Civilization and Climate to Kaldor’s three growth laws, de Haan covers key factors of development, namely, growth, total factor productivity, inequality, poverty, democracy, and corruption, as well as key economists of development such as Smith, Marx, Rostow, Nurkse, Chang, Acemoğlu, Milanović, and Kahneman. De Haan enriches the book with his own experience as well. Whatever Happened to the Third World? also engages with some of the most debatable issues in both development and economics, such as the middle-income trap, whether democracy is the key element for development, and the role of institutions. De Haan bravely brings the whole development history of humankind in front of our eyes to illustrate that development is more than a field; it is a history that needs more than one singular answer. To sum up with his own words: “The overall conclusion must be that economists while explaining a lot about economic growth, should not pretend to have all the answers” (p. 185). De Haan here gives a clear message to the economists who focused only on the growth and nothing but the growth in order to broaden their horizon as development covers more than economic variables. From my point of view, this book provides a comprehensive interdisciplinary perspective that is going to widen people’s knowledge about economic development. I highly recommend this book for academics, post-graduate students, even for the people who work at non-governmental organizations. 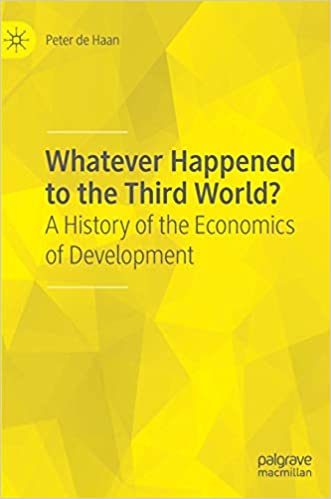