The most important contribution of Turkey’s Electoral Geography is that it covers not only elections but also a variety of understudied topics such as gerrymandering, gender, voting from abroad and election monitoring organizations. The methodological diversity of the book and its focus on different elements of electoral geography make the book attractive. A chapter utilizing political psychology frameworks would have been a helpful addition, since recent developments in the literature recommend psychological frameworks to extend our understanding of the Turkish party system.

E. Özbudun’s 2013 analogy of “three maladies” affecting Turkish politics (fragmentation, volatility, and polarization) is widely used to explain multiparty politics in Turkey.1 Although the existing literature is rich with attempts to identify the main “maladies” of the political system in Turkey,2 Turkey’s Electoral Geography, edited by Edip Asaf Bekaroğlu and Gülsen Kaya Osmanbaşoğlu, adds regionalization as the fourth malady, and identifies this phenomenon as the explanatory factor behind electoral geography in Turkey, particularly in the 1990s and 2000s. The book consists of nine chapters that seek to answer the question of how Turkey’s electoral geography, which is currently divided along lines of identity rather than socio-economic issues, has been shaped in terms of voting behavior, political parties, the party system, nationalization, and regionalization, gender issues, identity dynamics, and ideological polarization.

In the second chapter, Demirkol and Bekaroğlu interrogate why the Proportional Representation (PR) System in Turkey led to lower nationalization, while PR in other countries generally results in increases in party nationalization. The authors explain that this phenomenon in Turkey is related to two factors: military interventions and the institutional design of the electoral system. The change from the majority system to PR and the closing of the Democrat Party (DP), the most nationalized party of the 1950s, as well as the rise of identity politics since the 1990s, have decreased the nationalization of the party system.

In the fourth chapter, Tosun, Ünal, and Tosun explore why the electoral dynamics in the western coastal districts in Turkey have shown a predominantly Republican People’s Party (RPP) inclination since the mid-1990s, while the preference of the voters in these provinces was predominantly for center parties prior to that time. The authors reveal that the response of voters in western coastal districts to the rise of Islamist and Kurdish political parties nationwide resulted in a significant shift to center-left parties, especially after the 1999 elections. Therefore, the authors conclude that the support for the RPP in Western coastal districts should be evaluated from a spatial perspective rather than as an outcome of socio-economic dynamics.

The electoral dynamics of the southeastern provinces are explored by Alptekin in the fifth chapter, who notes that the southeastern provinces in Turkey display completely different spatial characteristics than the western coastal regions. Alptekin’s analysis regarding the Peoples’ Democratic Party (PDP) and its predecessors’ discourses in their electoral campaigns since 2002 demonstrates that the Kurdish political parties changed their discourses from a strictly class-based socialist rhetoric intertwined with Kurdish nationalism to a new-leftist tone inclusive of gender and environmental rights in their election campaigns. However, their discourses mainly changed based on election districts (i.e., a moderate and ‘pro-Turkey’ discourse in the western provinces and a more identity-based and radical tone in the southeastern districts).

In the sixth chapter, Akyüz and Çınar focus on feminist political geography by presenting women’s political engagement from national to municipal levels based on women’s cooperatives. Women in cooperatives engage with different issues ranging from manufacturing, management of money, and marketing, which has allowed women to expand their spatial constructions of local politics to achieve political agency despite the patriarchal structure of cooperatives. The authors conclude that women’s cooperatives are structures where “different constellations of power” (p. 101) are experienced and negotiated.

In the eighth chapter, Yüksel conducts a study of the social origins of women deputies (the languages they speak other than Turkish, their prior work experiences, level of education, place of birth, electoral area, and political party) in Turkey between 1935-2018, and presents several key findings. First, women’s representation is the highest in the Marmara, Central Anatolian, and Aegean regions. Second, the most critical factor involved in the selection of a woman deputy to represent a political party is the party’s choices and attitudes. Third, women in Turkey have always been considered ideological, religious, and ethnic symbols rather than emancipated individuals. Fourth, women politicians were predominantly educators in the single-party period, while the rate of white-collar women increased after the transition to multi-party politics. Finally, the author identifies a significant relationship between marital status and active political participation in Turkey; namely, while being married is a drawback for women deputies, it has become an advantage for male deputies.

Anaz and Köse, in the ninth chapter, tackle voting from abroad, which is another understudied topic. Turkish immigrants obtained the right to vote from abroad in 2012. They first were allowed to vote as expatriates at ballot boxes in their country of residence rather than at customs centers in the 2014 presidential election in Turkey. Given that Turkey does not recognize ‘abroad’ as a separate electoral district, the authors suggest that Turkish deputies should create diaspora electoral districts where expats can elect their own representatives. This is especially important because the concept of state-led citizenship has eroded, and the gradual increase in the participation rate may not continue if election promises about a special election district for emigrants are not fulfilled.

As a whole, the most important contribution of Turkey’s Electoral Geography is that it covers not only elections but also a variety of understudied topics such as gerrymandering, gender, voting from abroad and election monitoring organizations. The methodological diversity of the book and its focus on different elements of electoral geography make the book attractive. A chapter utilizing political psychology frameworks would have been a helpful addition, since recent developments in the literature recommend psychological frameworks to extend our understanding of the Turkish party system.3 Finally, I would recommend the book only for academic readers who have a background on Turkish politics. 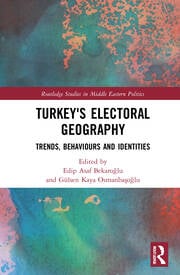 States in Disguise: Causes of State Support for Rebel Groups

A Quantitative Analysis of Turkey’s 2011 Elections