This book is a great source of information about the events that occurred in 21st century Iran, which changed history as well as beliefs about the role of Islam in political affairs.

The Iranian Revolution is of great significance in the context of the contemporary Islamic Resurgence. The author highlights the 1979 Revolution in the historical context of Shia and Sunni ideas of life. The book consists of six chapters and a rich list of references for further study about the Revolution.

Many great books have been written on the topic under reflection; the main focus of this contribution is the return of Ayatollah Khomeini after 15 years of exile on February 2, 1979. From this date the monarchial pattern of government seems to have vanished now forever. The revolution began with the nationalization of oil by Muhammad Mossadiq, whose government was toppled by a military coup backed by the CIA.

Under the subtitle “A New Religion in an Ancient Land,” January provides a background of the history of religion in Iran from 6000 BCE to the Arab conquest, and finally the Shia rule through the Revolution in 1979 AD. In this context, the author discusses the emergence of Shia thought as a fragment of the Muslim Ummah and connects it with the event of Karbala and revenge of Hadrath Ali (Muhammad’s (SAW) cousin and son in law) which is a complete deviation from historical facts. The author examines the constitutional revolution of 1905-1911 then turns a brief biography of Ayatollah Khomeini, followed by the thoughts of Imams and Ayatollahs.

January attempts to explain the unfortunate consequences of Reza Shah’s Reforms on the Iranian religious life. Khomeini had exposed all of this in his work “Secrets Exposed” in 1942 and declared them poison for Iranian life. After WWII, Reza Shah had been forced to abdicate his rule in favour of his heir apparent Muhammad Reza Shah, which clearly indicates that Iran was under foreign control as a kind of punishment for Reza Shah’s support of Germany. But public outrage increased as the public demanded their support for nationalization of resources be represented in the government. In 1951, under the premiership of Muhammad Mossadiq, Iran’s Oil Company (AIOC) was nationalized and the Shah was forced to flee the country. Blaming Russia for the nationalization move. The Shah bowed to U.S. for help and President Eisenhower directed the CIA to bring Muhammad Reza Shah back to power and position General Fezlollah Zahidi as a powerless prime minister, a sign of U.S. interference in Iranian affairs.

The second chapter entitled “The Cauldron Boils” discusses many political issues starting with Khomeini’s book The Explanation of Problems related to state. Earlier clergy had ceased any direct involvement in politics, viewing it as corrupt. Khomeini’s book explains the need to run Iran through Islamic law as a modern Shia state. Mossadiq’s overthrow, the role of SAVAK (Iran’s organization of National Intelligence and Security), US security services and the granting of full amnesty to U. S. citizens in Iran provided ground for the clergy to topple the government.

Khomeini declared the U.S. involvement treason, stating; “The dignity of Iran has been destroyed and trampled down under foot by the American boots being a weak nation” (p. 24). In reaction the Shah cursed Khomeini and used the secret police against his loyalists; the White Revolution was declared to improve and consolidate his power. To alienate the clergy the Shah adopted the old Persian culture and calendar instead of following Islamic traditions. Khomeini gave a call to boycott anti-Islamic celebrations. He introduced mourning on Husain’s martyrdom at Karbala and delivered fiery speeches against the Shah, which resulted in Khomeini’s banishment to Turkey and then to Najaf. Khomeini remained active in Najaf and sent secret letters to protest against the Shah.

The third chapter, “The Shah is Overthrown,” opens with Jimmy Carter’s public endorsement of the Shah. The Shah had to defame Khomeini but this resulted in anger among religious students and liberals who knew him closely. In retaliation, Iranian army killed 20 in Tabriz, with rioters targeting westernization signs and burning effigies of the Shah publicly. More riots overwhelmed the state’s crackdown and people observed the commemoration of the killings in Tabriz, defied the curfew and raised slogans such as “God is Great- Khomeini is our leader” (p. 47). When the situation turned hysterical, the Shah left Iran with a jar of soil. People passionately celebrated his departure and devastated military bases, police stations and SAVAK headquarters. Inmates were released, people vandalized the Kentucky Fried Chicken Franchise and renamed it Our Fried Chicken” (p. 43) Khomeini returned after 15 years of banishment, and was received with slogans of “Agha Amad” (The Holy One has come!). Khomeini’s referendum for the establishment of Islamic rule got 90 percent of the votes. A revolutionary council was established to achieve the goal of an Islamic State. Criminals were punished and local clergy loyal to Khomeini were given jobs to supervise streets, markets, schools, universities and other many professional institutions to maintain purity. In the new power structure, a Council of Guardians composed of 12 clerics and they held ultimate power for which Khomeini was termed a fascist and dictator by communists and pro westerners. Khomeini responded to all queries and The Time magazine declared him ‘Man of the Year.’

The fourth chapter, “Striking the Great Satan” deals with Iran’s political turmoil. People were quite hopeful about the departure of Shah. Still a threat was overhauling on their minds. News leaked that a former Iranian government official had met with U.S. officials in Algeria and discussed the prevailing situation. The CIA tried to raise minorities against the revolution, communists were working internally try to block Iran from becoming a theocracy. A frenzy arose among university students who struck the U.S. embassy in Tehran and took 66 embassy inmates hostage. Khomeini declared U.S embassy as center of treason and encouraged the students through radio broadcast, stating, “Our young people must foil plots, treasons devised in these very embassies mainly by great Satan America” (p. 73). Finally the former Iranian government resigned and the revolutionary council of Ulama took rule into their hands.

In the fifth chapter, titled “444 Days” the author discusses the hostage crisis in which the courage and determination of the students was praised by the clergy. The new American President started negotiations, reached to an agreement of non-interference in Iranian internal matters, and released 9.5 billion dollars of Iranian frozen money (p. 930); the hostages were finally released after 444 days. The author highlights the issue of former Iranian President Ahmadinejad being among the captors. Enemies restricted Iran’s economic activities but the immediate threat posed by Saddam Hussein who invaded Iran’s western border, the oil rich region Khuzestan, proved fatal for Iranians.

The sixth chapter of the book, “The Ayatollah at Twilight,” emphasizes the circumstances and the challenges stemming from the communists and People’s Mujahedeen Organization, which sought to overthrow the Iranian government by using lethal weapons; they detonated bombs and killed hundreds of people, including officials and close friends of Khomeini. Khomeini deposed then president Bani-Sadr, who had sided with the groups, and put forth an eight point truce formula to bring peace to the country. Komati’s were set right and their free hand was restricted. On the battle front, revolutionary guards and Basij were introduced to snatch occupied areas from Iraqi forces. Khomeini was determined to continue the war but was forced to end it. He called the decision more deadly than drinking hemlock. Khomeini desired to export the Revolution outside Iran and allowed the PLO to open its office in Tehran. Khomeini was blamed for helping terror groups to take revenge on the U.S. by killing Marines in Lebanon by blowing up a U.S. naval vessel.

Iran drew more publicity when Khomeini issued a death fatwa against Salman Rushdie for writing the Satanic Verses. Such a fatwa was condemned by people in the Europe, being against freedom of thought and expression. In his concluding remarks, the author describes Khomeini’s wish to run Iran on a religious model, in which people are allowed to use cell phones, and women to wear jeans under their long gowns. Finally the author focuses on the conflict pitting the ‘Axis of Evil’ against the ‘Great Satan,’ describing U.S. laid sanctions against Iran and its labeling of Iran as a harbor for terrorists in order to restrict Iran from achieving nuclear capability.

The author reveals his bias by using harsh language against clergy such as the Mullahs. Nevertheless this book is a great source of information about the events that occurred in 21st century Iran, which changed history as well as beliefs about the role of Islam in political affairs. 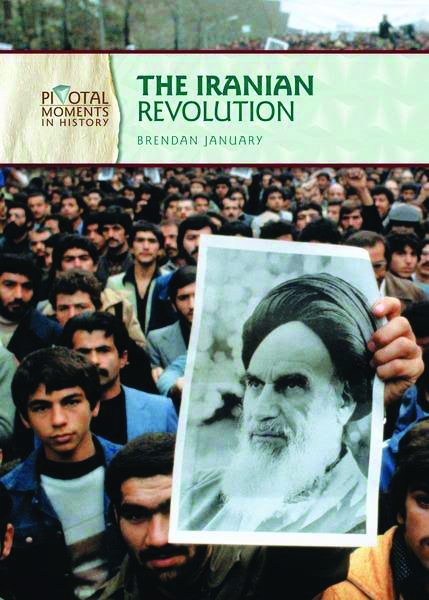