After Aleppo: The Long Game in Syria

In the aftermath of the victory by pro-Syrian government forces in Aleppo in December 2016, many see an opportunity for a political resolution to the Syrian civil war. Although Syrian President Bashar al-Assad for the time being seems to have secured his position in power, there remains much work to be done in order to bring Syria back to life again after the deep level of disruption and destruction. No less work is needed to create a vision for the future of Syria that will appeal to a critical mass of Syrian opposition elements and pro-Syrian government constituencies. This essay details how far Syria has to travel in terms of becoming a functioning state again as well as potential options for a workable and sustainable political system into the future. 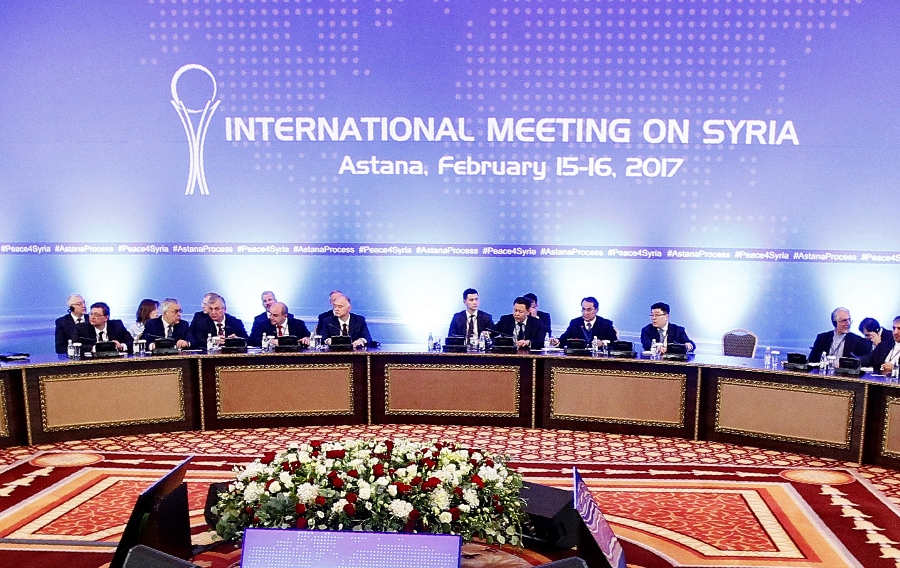 Key actors and powerbrokers –Russia, Turkey and Iran– brought the warring sides (representatives of the Assad regime and the opposition groups) together in Astana to discuss the Syrian crisis on February 16, 2017. AFP PHOTO / STANISLAV FILIPPOV

In an interview with French media published in early January, following his government’s forces re-taking of east Aleppo from opposition elements, Syrian President Bashar al-Assad stated that this success signaled a “tipping point in the course of the war” and that his government was “on the way to victory.”

But what is “victory”? Is it merely staying in power and holding onto what many have called “useful Syria,” i.e. the line of cities from Aleppo in the north down through Hama, Homs, and Damascus along with the Syrian Mediterranean coastal cities of Latakia and Tartus? From this position, the Syrian regime might then hope to gradually take over other parts of the country, the majority of which, territorially speaking, is still held by the ISIS, the YPG, and some remaining Syrian opposition armed groups. The idea might be that Assad’s Russian allies as well as the U.S.-led coalition will continue to whittle down the ISIS, eventually liberating Raqqa itself, the ISIS’ de facto capital. The YPG might then be boxed in and prevented from expanding beyond the territory it already controls in northern and northeastern Syria by a combination of Syrian government forces south of YPG territory, and by the Turks, whose recent rapprochement with Moscow may sacrifice the YPG on the altar of Ankara’s grudging acceptance of Assad’s continuation in power, as well as its diminished support for Syrian opposition groups. With the takeover of Aleppo, along with the tenuous cessation of hostilities negotiated by Russia, Turkey, and Iran this past December, it is certainly more than likely that Bashar al-Assad and the regime he oversees will continue to govern Syria into the foreseeable future.

But then what? Even under this rosiest of scenarios from the point of view of Damascus, without true political restructuring