Turkey in the 21st Century: Quest for a New Foreign Policy is a welcome addition to the fast-growing literature in English on Turkish foreign policy. Edited by Professor Özden Oktav from Yildiz University and including chapters written by several young and upcoming scholars from Turkish universities, the book is a testament to the increasingly lively discussion surrounding the country’s foreign policy.

Turkey in the 21st Century: Quest for a New Foreign Policy is a welcome addition to the fast-growing literature in English on Turkish foreign policy. Edited by Professor Özden Oktav from Yildiz University and including chapters written by several young and upcoming scholars from Turkish universities, the book is a testament to the increasingly lively discussion surrounding the country’s foreign policy.

There are many positive things to be said about this book. The first one is the emphasis that was put on the issue of change. Authors of the various chapters, which encompass a wide range of topics from Turkish-Israeli to Turkish-EU relations, rightly point out that Turkish foreign policy has evolved since the 1990s. While the Turkey of the Cold War era was a relatively circumspect international actor, selectively focusing on issues that directly impinged on its national security as a post-imperial state, the “New Turkey” has in most recent years become one of the most active players at both the regional and global levels, leading numerous initiatives and attracting a lot of attention from neighbors and its traditional allies in Europe and North America. As the chapters of the book clearly reveal, the debate is still very much open as to the exact sources of this transformation and the relationship between the different drivers of change.

The second good part of the book is precisely the plurality of views that is offered on the hotly debated topic of the causes of Turkey’s transformation. Too many articles and books have been written focusing exclusively or primarily on one driver of change. In a superficial and often biased way, a host of scholars—especially in the West—has contended that the religious identity of the new post-secularist elite that has been ruling Turkey since the early 2000s has mainly informed and guided the process of both domestic and international change. According to this view, Turkey has become more interested in developing close ties with other Muslim-majority countries in the Middle East and North Africa under the rule of the mildly Islamist Justice and Development Party (AKP), sometimes at the expenses of its more established relations with the West.

Other books, for their part, have focused attention on systemic factors—such as the transition from bipolarity to multipolarity—or on watershed moments in international politics, such as the 9/11 attacks, as the root causes of Turkey’s new international orientation. According to these interpretations, Turkey has been mainly reactive to events and trends taking place sometimes faraway from its borders but that have deep and direct implications for its regional engagements and its international identity.

In fact, it is safe to argue that no analysis of the evolution of Turkish foreign policy over the past few decades could claim to be exhaustive if it did not consider the interplay of all these and other factors. The new elites that came to power in Turkey in 2002 inherited a country that had already deeply changed thanks to a more permissive international environment following the fading of the Cold War balance of power, and to reforms that such leaders as Turgut Özal had presciently implemented in the 1980s with a view of integrating Turkey into the emerging global economy. The question, therefore, was not so much in terms of the imposition of a new ideology on the country and its foreign policy—although the new post-secularist elite has certainly developed a new hegemonic discourse—but rather how political Islam was reinterpreted in the Turkish context in light of larger transformations in the international system. This interplay of domestic and international factors is well illustrated in the various chapters of the book.

A third welcome aspect of this book is the honest realization permeating various chapters in the book that while it has been a “success story” overall, Turkey’s ascent as a regional actor is still an unfinished project and that opportunities co-exist with great challenges. Although published in 2011, before some of the most recent threats to Turkish security fully materialized, the authors clearly and rightfully acknowledge that in many, if not all, areas of foreign policy the new activism has not led to the expected results. If one separates declaratory policy and rhetoric reality, the gap between declared and achieved goals is substantial. Some argue that this gap is actually growing wider by the year.

On various fronts of the much-publicized new multi-directional Turkish foreign policy, significant setbacks have taken place. Turkey’s accession process to the EU has not progressed, although it has remained a stated objective of successive governments. A normalization of relations with Armenia was started but has not been completed. The Cyprus question remains stalled and has even been further complicated by new tensions surrounding gas discoveries in the Eastern Mediterranean. The new relations that Ankara had built in the Arab world in the 2000s were all put to a test with the so-called Arab Spring. In a significant shift, Turkey has decided to support the reform movements and break with the regimes it had worked very closely with in the past. Overall this shift seems to have worked well in places like Egypt and Tunisia, but has led to a deterioration in Turkey’s relations with neighboring Syria, with direct implications for Turkey’s security across the common border. Turkey is currently faced with a very serious crisis that has already become internal. One of the ramifications of the Arab uprisings has been the revival of long-standing national movements, first among which is Kurdish separatism.

If there is one element of the book that is not as developed as it should be is what seems to be an ever more direct link between the future of Turkish influence in the surrounding regions and Turkey’s ability to continue its positive internal transformation. Except for a couple of chapters on domestic issues that have an impact on the evolving relationship with the EU—from human rights to other legal standards—the volume provides insufficient analysis on the domestic requirements for a continuing Turkish rise. But as the sources of Turkey’s activism in recent years have been in part domestic, so will be the determinants of its success and failures in the years to come. Any book on Turkish foreign policy that aims at shedding light on the future should address the Kurdish question head on, as this has been and will become even more of a key test of Turkey’s ability to prove its maturation as an open democracy that is capable of reconciling itself with its diversity. Other issues that will arguably have a deep impact on Turkish foreign policy moving forward are the quality of its leaders, the strength of its institution, and the breadth of the internal debate on issues of national importance. The overhaul of the Turkish constitution in the direction of pluralism will be a central test of Turkey’s ability to cultivate a new political culture built on the principle of inclusiveness and breed a new class of leaders that will accept the constraints and responsibilities that come with the rule of law in a democratic context.

As a new generation of Turkish scholars continues to discuss the important debate of their country’s foreign policy, one hopes that the intimate connection between what Turkey is as a polity and what it does and how is perceived internationally will only receive more attention. These are issues that will hopefully figure more prominently in the scholarship that the authors of this valuable volume will develop in the years to come. 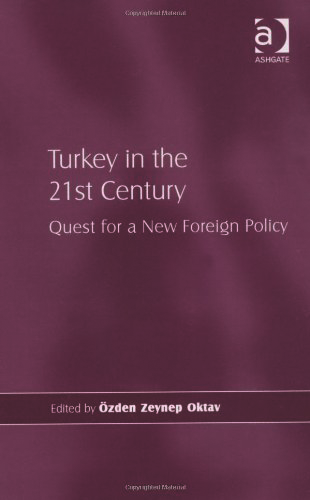