After the publication of the Fall 2020 special issue “The Future of The Libyan Crisis: External Actors and Internal Reconstruction,” Insight Turkey coordinated a panel where distinguished participants shared their opinions on the determinative role of the external powers in the civil war. Due to the COVD-19 pandemic, the panel was held online and broadcasted live from YouTube and other social media platforms. 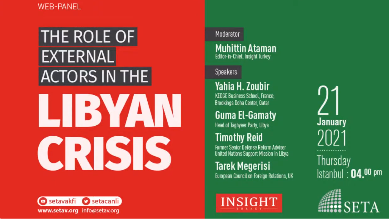 Yahia H. Zoubir focused on the role and the intervention of the regional countries in the Libyan crisis. He argues that the intervention of the outside powers has not begun in the last few years but it has happened after the beginning of the uprising in 2011. The regime change which left the country in shambles was the underlying reason for the intervention of the foreign powers. The outside powers don’t really care about the domestic situation in the sense of humanitarian aspect given that hundreds of thousands of Libyans have been displaced or left the country, and many people have become refugees because of the conflict. He argues that the only legitimate foreign presence in Libya is Turkey’s presence because it was invited by a legitimate government. Because of the varied interests and the unabated rivalry in Libya a definitive solution has been prevented. He outlined Turkey’s interests with Libya and argued that the intervention of Turkey in Libya has destroyed all the calculations Egypt had.

Even though it had given support to Haftar, Russia tries to be more balanced as it plays the GNA card. It would like to be seen as a mediator especially after the defeat of Haftar in 2020. Prof. Zoubir talked about the reasons why Russia is interested in Libya. First of all, Russia wants to enhance its regional stature as a diplomatic facilitator and also wants to consolidate its infrastructure contract because Russia lost lots of its investments in Libya just like Turkey and China did following the revolution. One of the reasons for its presence is to undermine the Western countries interests by promoting insecurity in the country. Despite its size, UAE tries to establish a regional empire and crush any arising democratic movement attempts in the region. It tries to undo revolutions and in order to achieve that objective, it supports Haftar.

Prof. Zoubir concluded that as long as the outside powers don’t support a genuine ceasefire in the region, the conflict will continue. The divisions within Libya facilitate the intervention of the foreign Powers in the country.

Guma al-Gamaty talked about Turkey’s role in the reconstruction of Libya. He mentioned that the main reason why Turkey and Libya have such a unique relationship is simply embedded in two words: history and culture. He explained the strong and deep-rooted historical and cultural ties between these two countries and argued that the history repeats as Turkey answered the call of Libya once again in 2019 just as the Ottoman Empire answered the call of Libyans to liberate their country.  He sets forth how Turkey’s involvement was totally legitimate while other countries’ are not since Turkey intervened only after signing the agreement with the Libyan government in 2019.

According to Guma el-Gamaty, Turkey can help Libya in a couple of areas. Libya missed the first opportunity to stabilize the country and reconstruct the state buildings after 2011. The countries who helped overthrow Qaddafi –namely, U.S., France and UK– did not calculate the aftermath of the incidents thus failed Libyans in the restructuring of the state-building and stabilizing the country. Yet, Turkey appears to be a second chance for Libya to achieve those goals. Libya needs reconstruction across all sectors which can only be achieved by having security stability and political resolution. Over the last 50 years, Turkish companies played a major role in reconstruction, and they can help Libya once again now.

He finalized by arguing that what Libya needs is strong bonds and cooperation with Turkey on all sectors and dimensions of Libyan society. In this way, this strategic relationship will succeed and last for decades.

Timothy Reid focused on the French intervention in his representation and talked about how it influences the power equation in the Libyan crisis. He pointed out that France was wanted in Libya in the past but by 2019, we see hostility towards it by Libyan people because of Macron’s policies. Following 2012, gradually France has been taking a more pro-authoritarian bent in its foreign policy. He argues that president Macron engages in the worst sort of transactional behavior that will bring harmful long-term consequences.

France aligned itself with Saudi Arabia, UAE, Egypt, Russian and Janjaweed mercenaries. Although it claims to be acting to combat violent Islamic terrorism, many of these states are the ones who furnish those who participated in the terrorist acts in 9/11 in New York and in other places and they have been supporting terror in Libya and they generally attempted to install regimes that they deem sufficiently authoritarian. He argues that this comes from the insecurity that some of these regimes feel. The whole idea of democratic movements that may challenge the model in their country worries countries like UAE and Saudi Arabia and this may explain some of their actions. Timothy Reid mentioned how in various ways they supported Haftar, and promoted Madkhaly ideology, combining very conservative social views with unquestioning loyalty to the secular leader. Mr. Reid explained the reasons for France’s support by saying that it is because of Islamophobia, economic interests and refugees. Yet, its actions are causing more refugees and it is openly hostile to Turkey, which has taken more refugees more than all EU countries combined.

Since 2013 Saudi Arabia, Egypt, and UAE are amongst France’s most important clients regarding weapon sales. Thus, France has definitely tied itself to the interest of these important weapons clients and it seems like it is often acting at their behest as a part of its partnership in selling them all these weapons. Interestingly enough though there is a spike in sales to Qatar in 2019 and this could raise the question that whether France will change its tune.

Tarek Megerisi mentioned EU policy towards Libya in his Speech. Europeans may have been the most prominent actors but for more than a few years, they have been ignoring Libya’s festering crisis. Their interests have been overrun by other intervening states. There have been two tiers of European engagement with Libya especially since 2014: EU and member states of EU. EU priorities in Libya tend to reflect the most keenly felt European threat of the time as well as the positions of the dominant member states.

Interventions from other countries like Russia, UAE, andTurkey created new threats. So, the new and overwhelming need for Europe was to try and help dampen tensions and to stabilize the political situation before it all spun out of control. Operation Irini’s ability to monitor and do something with this evidence was weakened by the fact that different European member states were eighter backing sides of the war or just generally walking on eggshells to secure particular interests rather than being fully behind normative traps towards the escalation. If the EU state could be considered broad-based then the member state side of the policy coin is the exact opposite.

Germany through the Berlin process and its corresponding roles at the time eighter at the UNSC on the sanctions committee or its time as president of the EU commission was perhaps the only European entity that took that strategic role whilst Paris, Rome and others sought to take part in this great game style of politics. It felt obliged and almost it was the only one flying the flag for the concepts of international norms of multilateral approaches and de-escalation. Mr. Megerisi argues that Libya will be the single biggest test of how true Europe’s recent pretensions of becoming more geopolitical and developing its strategic autonomy will actually be.

Mr. Megerisi concluded his speech saying that it will be the key dynamics to watch how capable European countries are of working together and through the EU to engage with intervening states such as Egypt and Turkey. More importantly, how assertively or successfully Europeans can now shepherd frail UN process towards a successful outcome and by doing so prevent their own marginalization by other intervening powers such as Russia, Turkey and UAE.